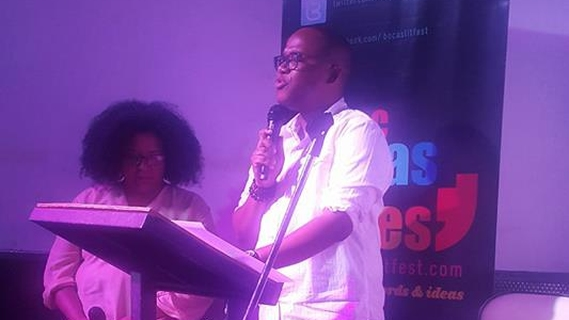 While it was the second partnership between the literature festival and CAISO, it was also the 20th anniversary of Backchat- the first ever Caribbean LGBT literary reading. The first was held in New York City.

Highlights of the evening were special guest Jamaican writer Kei Miller, winner of the OCM Bocas Prize for Caribbean Literature in 2017, who read his short story “Read Out Sunday” which humorously tells the story of churchgoer Sue who gives her life to God and got back her virginity.

Kyle Hernandez, finalist of the First Citizens National Poetry Slam Competition this year, performed a piece that comically spoke about the special relationship most men have with their barber.

Terry Ann Roy, member of the Alliance for Justice and Diversity, said LGBT people have always contributed immensely to many aspects of our culture including literature and the arts.

"Last night we saw Caribbean writers come together and share many stories and poems which resemble not only the existence of Caribbean LGBT persons but also highlighted our resilience, strength and power as we have fought to carve a space in Caribbean society," she said.