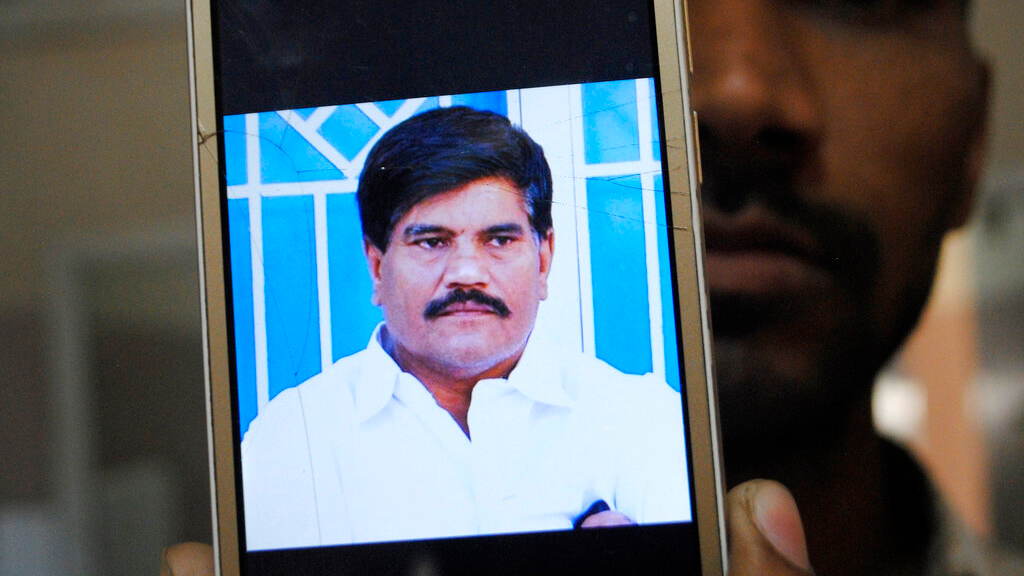 An employee of a local television channel shows a picture of slain journalist Aziz Memon on his mobile, after a demonstration to condemn his killing, in Hyderabad, Pakistan, Monday, February 17, 2020. (AP Photo/Pervez Masih)

The body of a slain Pakistani journalist was found dumped in a canal just hours after he went missing while on his way to work, police said Monday. His family said he was brutally killed but that they have no idea who was behind the slaying.

The 56-year-old Aziz Memon had worked as a reporter and cameraman for a local TV station in southwestern Sindh province. He went missing while going to work on Sunday.

Police chief Mohammad Farooq said the body was found in a canal in Mehrabpur village and that an investigation was underway. No one immediately claimed responsibility for the abduction and killing of Memon.

His brother, Abdul Hafeez, said Memon had received threats last year after reporting that a politician from the area had paid bribe money to locals to attend an opposition rally.

Later Monday, angered over Memon's killing, journalists from various newspapers and TV stations held a peaceful protest in the southern city of Hyderabad, condemning the killing and demanding the arrest of those behind it. Hundreds attended Memon's funeral in his hometown of Naushero Feroze.

The killing drew condemnation by rights activists on social media. The Committee to Protect Journalists and the independent Human Rights Commission of Pakistan also condemned the killing and called for an independent probe into the slaying.

An old posting of Memon resurfaced on social media in which he says he received threats after covering a rally of Bilawal Bhutto Zardari, who heads the opposition Pakistan People's Party. Zardari also condemned the killing, demanding Memon's killers be arrested as soon as possible.

Anthony Bellanger, IFJ's general secretary, said the organisation “mourns the shocking death of journalist Aziz Memon" and criticized the police for not following through on the threats he had reported.

Pakistan is considered a dangerous place for journalists and those involved in attacks on journalists are rarely punished. The country has also witnessed an intensified crackdown on human rights defenders, activists, journalists and members of civil society over the past years.

Journalists, who have taken on military dictators and been beaten and jailed in the pursuit of a free press, say they now face a form of censorship that is more subtle but no less chilling, spearheaded by the security services, to quash critical coverage.