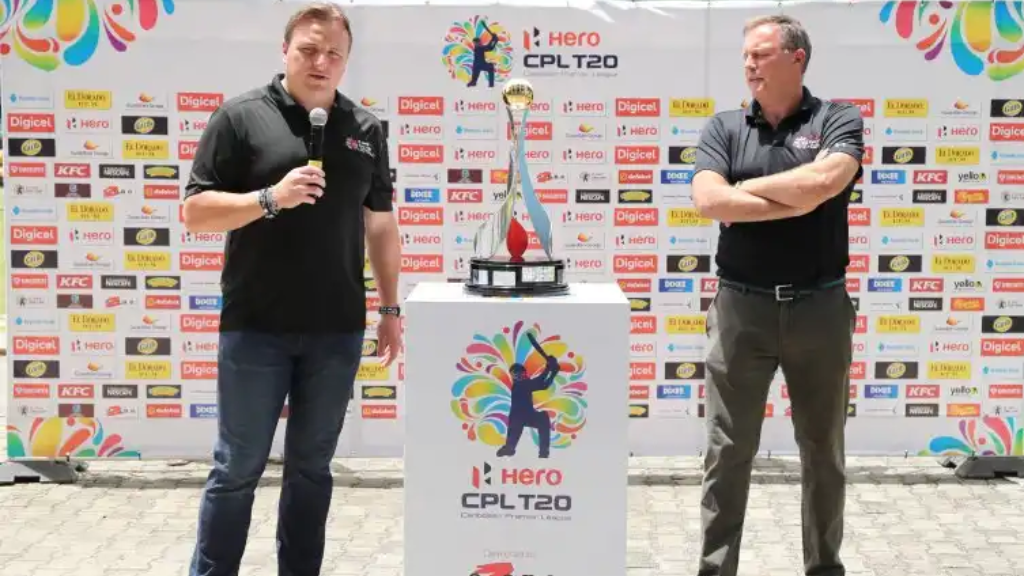 The 2018 Hero Caribbean Premier League (CPL) season is here and there has been a refresh of the trophy for this year. The sleek and modern design integrates the colourful and vibrant Hero CPL logo with a cutting edge look. Designed by Ryan McClean of Ryan McClean Silver, the new trophy will be up for grabs when the tournament gets underway on 8 August with defending champions Trinbago Knight Riders taking on St Lucia Stars.

The trophy was delivered to Queen’s Park Oval by Hero CPL’s official logistics partner, eZone. Present at the unveiling were Damien O’Donohoe and Pete Russell, CEO and COO of the Hero CPL, and Dwayne Bravo and Javon Searles from the Trinbago Knight Riders.

Speaking about the vision behind the trophy McClean said: “I designed the trophy after spending time looking at the Hero CPL logo. I wanted to try and tie the two things together. The logo, just like Hero CPL, is dynamic and colourful and I felt the trophy should mirror this. The swirls from the logo holding a cricket ball seemed a perfect fit to reflect what Hero CPL represents - the perfect synergy of carnival and cricket."

This year will also see the arrival of the Bouncers, the new mascots for Hero CPL. The cricket loving siblings – Vivian and Richard – will be helping to keep the crowd entertained across the tournament. They were both present at the trophy launch in Port of Spain to help celebrate the new trophy and get us ready for the upcoming tournament.

Damien O’Donohoe, Hero CPL CEO said: “It’s great to be back here again at the Queen’s Park Oval. It is hard to believe for Pete and I that this is year six, we couldn’t be more excited. We definitely believe that this is going to be the biggest and best year by far. It’s great to be playing the home games here at Queen’s Park Oval and the finals at the Brian Lara Stadium. We just want to showcase our new trophy which we’re very proud of. We had a top silversmith working on this for about six months and we think it’s first class.”

Dwayne Bravo, captain of the Trinbago Knight Riders said: “It’s a pleasure for me to be standing here next to this nice trophy. Hopefully I’ll be the first captain to lift it again this year. CPL is a very good tournament, it’s one of the most successful tournaments in the world one of the most anticipated tournaments in the world. Playing the first game here at my home ground here at the Queen’s Park Oval it’s going to be a full house. I want to wish all the teams all the best in this tournament – the fans are going to get their monies worth and once again thanks to CPL for continuing to support Caribbean cricket.”