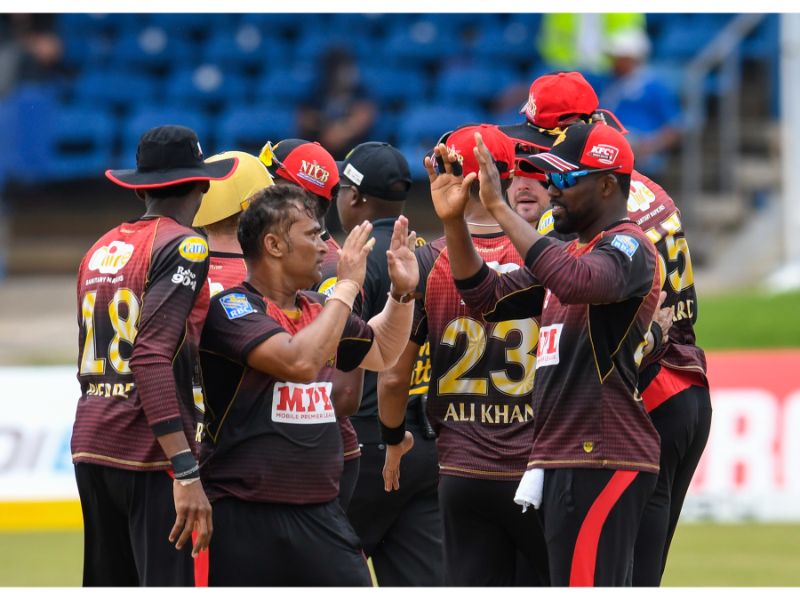 Dwayne Bravo took his 500th T20 wicket in the Trinbago Knight Riders six-wicket win over the St Lucia Zouks  in a rain-affected match on Wednesday at the Queen's Park Oval.

Bravo, 36, dismissed Rakheem Cornwall in the 4th over of the match to claim the milestone, 14 years after his international career began, in his 459th match.

Pravin Tambe, who took 1/15 for the Knight Riders, to become the first Indian national to play in the CPL.

Several bouts of heavy rainfall at the Queen's Park Oval ended the Zouks innings, and the Knight Riders were set a new target of 72 off nine overs.

The TKR made heavy weather of the target losing three wickets for 27 before Darren Bravo 23 not out and Tim Siefert 17 not out clinched victory with an over to spare.

The fit-again Rakheem Cornwall was unfazed and hit the ball after Fletcher’s dismissal for six, and the Zouks flew to 32/1 after three overs.

But then Cornwall drove aerially, Munro took a good catch, and on his home ground Bravo became the founding member of T20 cricket’s 500 Club.

He soon made it 501 - a portentous number on a ground with a pavilion named for Brian Lara - by yorking Roston Chase, and after a strong start the Zouks had stuttered to 43/3 off the Powerplay.

Pollard went with Fawad Ahmed and himself after the Powerplay to keep the pressure on. They did so with aplomb, conceding only 15 runs in four overs and not giving up a single boundary.

48 year old Pravin Tambe, the first Indian to play the Hero CPL, only got one over, but it was an eventful one.

Najibullah Zadran hit a Hero Maximum and a four, but Tambe had the last laugh.

Najibullah misread the googly and gave Pollard a simple catch at cover, and Tambe had his own little moment of history.

Mohammad Nabi was busy, cutting Pollard for four, but with Mark Deyal scratchy, Fawad’s over went for just four and Pollard finished his spell tightly, leaving the Zouks searching for rhythm at 93/4 off 14 overs.

Nabi tried to provide it, sweeping Fawad for four and launching him for a Hero Maximum, but Fawad finished strong by ending Deyal’s struggles.

Zouks captain Daren Sammy decided the situation called for himself, but Pierre returned with another good over and the Zouks entered the last four overs at 109/5.

Sammy had a few lusty swings but missed them all, and was eventually trapped LBW by Pierre.

That was the last action before the rain came, and one wonders how many runs Nabi being starved of strike took off the Knight Riders’ adjusted target.

Nabi sparked hope with the ball, trapping Lendl Simmons LBW for a second ball duck. Munro though was positive, sweeping for four then a Hero Maximum to get the Knight Riders up and running.

Scott Kuggeleijn didn’t help matters for the Zouks, firing down five wides in an over that went for 11.

Kesrick Williams was on the money, as both Munro and emergency opener Tion Webster found long-on to leave the Knight Riders three down and with Pollard and Darren Bravo yet to face a ball.

Pollard though didn’t last long - he got off the mark with a classy flick for four off Chemar Holder, but the young Bajan responded with one that jagged back off the seam to take an inside edge that was very well caught by Fletcher.

After four overs, the Knight Riders needed 35 off 30 balls but were four down.

Nabi returned, but Bravo and Tim Seifert managed five singles off him to keep the Knight Riders ahead of the DLS par.

Seifert had only faced three balls in the whole tournament before today, but was busy and inventive.

A flick over his shoulder off Kuggeleijn raced for four, and the Knight Riders needed 22 off the last three overs.

Darren Bravo brought up a milestone of his own off Williams, his 100th Hero CPL six, to reduce the equation to a run a ball.

Holder was excellent at the death in the Zouks’ own DLS victory against the Guyana Amazon Warriors and was trusted with the penultimate over here, but Bravo hammered Hero Maximum no.101 to make victory a formality.

Seifert drove for four to finish it with an over to spare and send the Knight Riders clear at the top of the table.