Brazil wonders why after school shooters kill 8, themselves 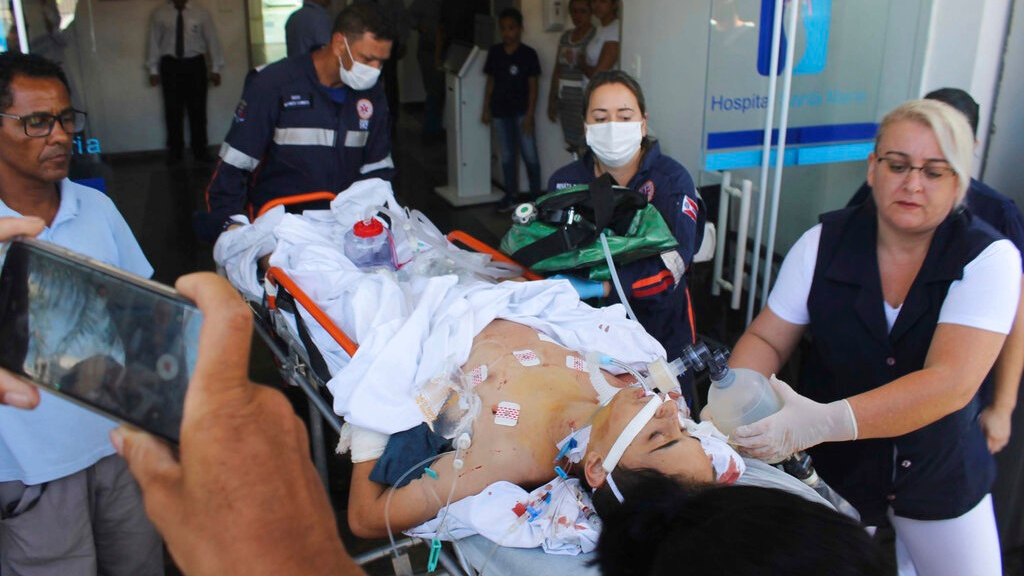 A Sao Paulo suburb prepared to bury its dead Thursday while looking for reasons why two masked former students armed with a handgun, knives, axes and crossbows killed five teenagers and two adults at a school before killing themselves as police closed in.

Authorities said the pair also fatally shot the owner of a used car business nearby before launching the attack Wednesday on the Professor Raul Brasil school in Suzano, a suburb of Brazil's largest city.

Brazil has the largest number of annual homicides in the world, but school shootings are rare. In 2011, 12 students were killed by a gunman who roamed the halls of a school in Rio de Janeiro.

Besides the five students killed Wednesday, the dead included a teacher and a school administrator, said Joao Camilo Pires de Campos, the state's public secretary. Nine others were wounded in the school attack, he said.

"This is the saddest day of my life," de Campos told reporters outside the school in the Sao Paulo suburb of Suzano.

The dead students were to be buried Thursday.

"The big question is: What was the motivation of these former students?" de Campos said.

Monteiro's mother, Tatiana Taucci, offered a possible answer, telling Band News while hiding her face from the camera that her son had been bullied at the school.

She said she was surprised by his involvement and found out about the attack from the television like everyone else.

Minutes before the attack, Monteiro posted 26 photos on his Facebook page, included several with a gun and one that showed him giving the middle finger as he looked into the camera.

In some of the photos, he wore a black scarf with a white imprint of a skull and cross bones. No text accompanied the posts.

By Wednesday afternoon, Facebook had taken down Monteiro's page.

During the attack, Monteiro opened fire with a .38 calibre handgun and de Castro used a crossbow, de Campos said. He said forensics would determine how each of the victims died.

"In 34 years as a policeman, it's the first time I see someone use a crossbow like that," police Col. Marcelo Salles said. "It is horrendous."

The assailants were trying to force their way inside a room at the back of the school where many students were hiding when police arrived. Instead of facing officers, Monteiro shot de Castro in the head and then shot himself, authorities said.

Kelly Milene Guerra Cardoso, 16, said she and other students took refuge in the school's cafeteria, locked the door and lay on the floor.

"We stayed there until the door was opened. We thought it was the shooters coming to get us, but it was the police," she said. "They told us to start running."

Horacio Pereira Nunes, a retiree whose house is next to the school, said he heard shots around 10 a.m.

"Then a lot of kids started running out, all screaming," he said. "It didn't take long until police arrived."

The public school has more than 1,600 students from elementary to high school grades, teachers gathered outside said.

President Jair Bolsonaro ran on a platform that included promises to crack down on criminals, in part by expanding public access to guns. Soon after his Jan. 1 inauguration, Bolsonaro issued a decree making it easier to buy a gun.

"A monstrosity and cowardness without equal," Bolsonaro wrote in a tweet expressing his sympathies for the families of the victims of Wednesday's attacks.

Sen. Major Olimpio, a member of Bolsonaro's party and a proponent of loosening gun legislation, again made that argument hours after Wednesday's rampage.

"We can't let those who take advantage of this tragedy speak about how disarmament is the solution," he tweeted, adding: "Weak and shameful 'disarmament farce,' which gave guns to criminals and prevented self-defense."