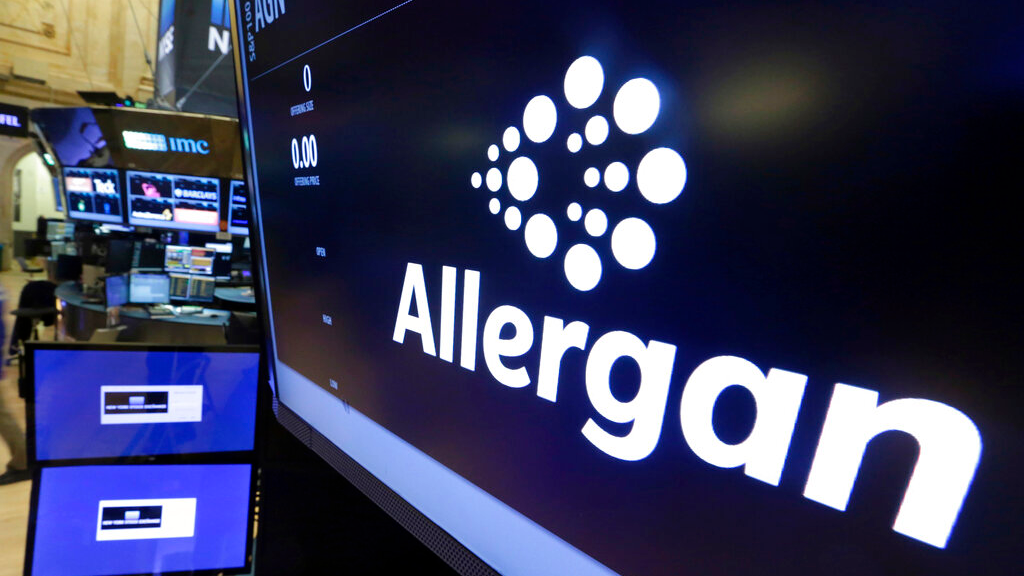 FILE - In this Monday, Nov. 23, 2015, file photo, the Allergan logo appears above a trading post on the floor of the New York Stock Exchange. (AP Photo/Richard Drew, File)

The U.S. Food and Drug Administration said it called for the removal after new information showed Allergan's Biocell breast implants with a textured surface were tied to the vast majority of cases of a rare form of lymphoma. The move follows similar action in France, Australia and Canada.

The FDA is not recommending women with the implants have them removed because the cancer is so rare, but say they should check with their doctor if they have symptoms, which include pain and swelling.

Biocell implants feature a textured surface designed to prevent slippage and to minimize scar tissue. Those models account for just 5 percent of the U.S. market. The vast majority of breast implants used in the U.S. have a smooth surface.

Wednesday's recall does not affect Allergan's smooth implants or a different Allergan textured implant sold under the Microcell brand.

Health authorities first linked breast implants to cancer in 2011. The disease is not breast cancer but lymphoma that grows in the scar tissue surrounding the breasts. It grows slowly and can usually be successfully treated by surgically removing the implants.

As recently as May, the FDA said that the danger did not warrant a national ban on textured devices. But the FDA said Wednesday that new data show a direct link to cancer with Allergan's implants not seen with other textured implants.

"Once the evidence indicated that a specific manufacturer's product appeared to be directly linked to significant patient harm, including death, the FDA took action," said FDA deputy commissioner Amy Abernethy, on a call with reporters.

The FDA said the latest figures show more than 80 percent of the 570 confirmed cases of the lymphoma worldwide have been linked to Allergan implants. Regulators estimate that the risk of the disease is six times higher with Allergan's implants than other textured implants sold in the U.S.

FDA officials said they decided to act after receiving 116 new reports of the cancer. Those reports increased the number of deaths tied to the disease from 9 to 33, including at least 12 cases in women with Allergan breast implants.

FDA's device director Jeffrey Shuren said the death increase played a significant role in their decision to seek a recall.

"Our team concluded action was necessary to protect the public health," he said.

The new numbers still reflect a rare disease considering an estimated 10 million women globally have breast implants. The FDA estimates that hundreds of thousands of U.S. women have the Biocell implants.

There is no firm agreement on the exact frequency of the disease, known as breast implant-associated anaplastic large cell lymphoma. Published estimates ranging from 1 in 3,000 patients to 1 in 30,000 patients.

"But what key factor is most important, we don't know at this time," said Clemens, a plastic surgeon who has published extensively on the disease.

Allergan said in a statement it would no longer sell or distribute Biocell implants and tissue expanders, which are used to prepare patients for breast reconstruction. The company said it would direct surgeons to return unused implants.

Roughly 400,000 U.S. women get breast implants each year. The devices have a silicone outer shell and are filled with either saline or silicone. Silicone-filled implants are more popular in the U.S. because they are considered more natural.

In the U.S., textured breast implants are also made by Johnson & Johnson and Sientra. A smaller manufacturer, Ideal Implant, only sells smooth implants.

"Either the company would voluntarily decide to withdraw them from the market to protect from lawsuits, or the FDA would persuade Allergan to do so," Zuckerman said in an email.

Breast implants tied to rare cancer to remain on US market

A healthy lifestyle may offset genetic risk for Alzheimer's