Brescia attempt to play down 'lighten up' remark about Balotelli 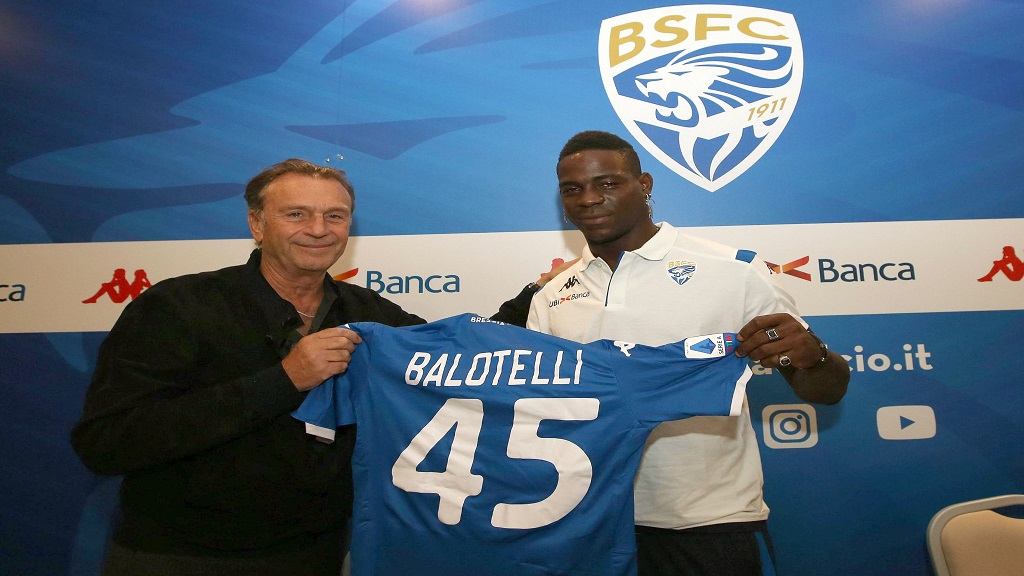 In this Monday, August 19, 2019 file photo, Brescia's president Massimo Cellino, left, holds a jersey with football player Mario Balotelli during a press conference in Brescia, Italy. Cellino has made an apparently racist remark about his own club’s forward Balotelli. (Filippo Venezia/ANSA via AP, File )

Brescia have moved to diffuse comments made by president Massimo Cellino, in which he appears to make a racist remark about striker Mario Balotelli.

Cellino suggested Balotelli, who was left out of the squad for Sunday's Serie A clash with Roma after a training-ground spat with coach Fabio Grosso, is "black and is working on lightening up, but he is facing troubles".

The word 'nero' in Italian means black but can also be used for 'gloomy', as in a person's state of mind.

A club statement read: "Concerning the declarations released this afternoon by president Massimo Cellino, referring to our player Mario Balotelli, Brescia Calcio evidently deals with a paradoxical joke, clearly misunderstood, released in an attempt to defuse excessive media exposure and with intent to protect the player himself."

Balotelli has scored twice in seven Serie A appearances since joining his hometown club in August and was recently subjected to racist abuse during a match at Hellas Verona.

Cellino suggested Grosso should have handled the situation with Balotelli better but also believes the former Liverpool and Manchester City frontman needs to do his talking on the pitch.

He added: "My manager made a mistake last week. He spoke about Balotelli and not about the team. I am not the manager and this is not a press conference but I see I have to answer.

"I signed Balotelli at the end of the transfer market. I didn't sign him for annual subscriptions or publicity. I thought he could be added value but due to this over-exposition we made him become a liability. So if you want to keep talking about Balotelli, you want to hurt him and ourselves.

"Maybe Balotelli gives more importance to social media than his own values. As a sportsman and a man. I haven't signed him for his social media, I did because he is 1.90 metre, he is an animal and still young enough to have a say in football.

"If and when he will do it, he will on the pitch. He has to learn how to answer on the pitch. In that moment he will be a footballer again. In this moment he is far from it. I signed him dreaming he could be an added value, but I never thought he had to be the one saving our club.

"I told him as I am telling you. It is too easy to use him as a scapegoat and this is why I sacked the previous coach. Because in this moment since he has arrived, Balotelli needed us to help him more than we needed him to help us.

"We should have done it before as now we are weaker and it will be harder to help him."