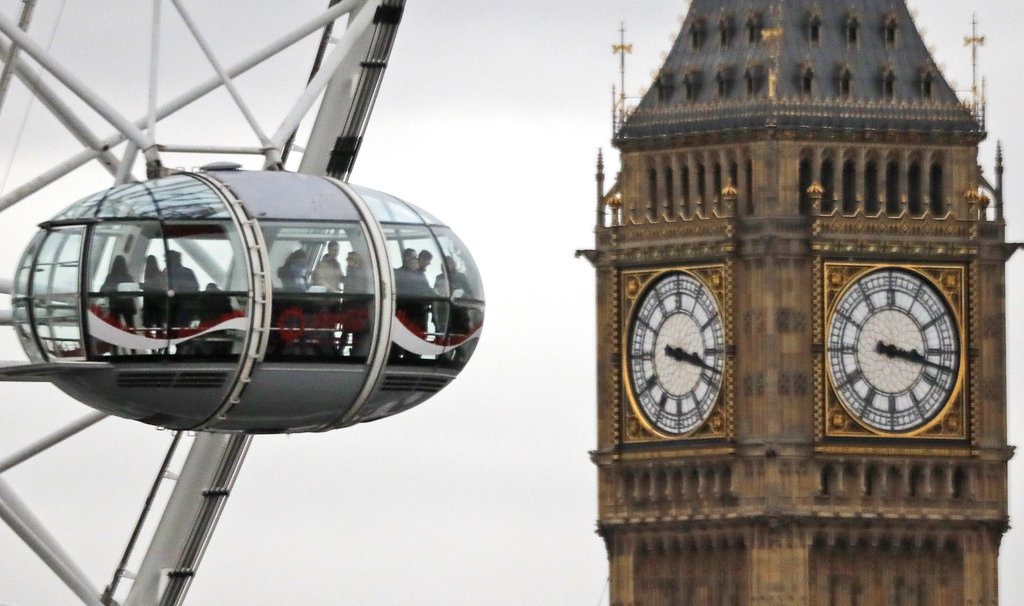 In this file photo dated Tuesday, Feb. 21, 2017, visitors enjoy the view from a pod on the London Eye overlooking Big Ben's clock tower and the Houses of Parliament in London. (AP Photo/Frank Augstein, FILE)

Many British businesses have become cautious as they try to gauge the impact of the country's 2019 departure from the European Union. But there's one industry that has so far clearly reaped a windfall from the Brexit decision — local tourism.

The sharp fall in the value of the British pound since last year's Brexit vote — it's down around 15 percent against a range of currencies — has made the country, which has been widely considered one of the more expensive places to visit, better value for money.

That means the pound in a tourist's pocket now goes further in what travel experts Euromonitor International say is the world's 8th most popular destination for overseas visitors in terms of revenue.

"It's been quite positive from European countries and from the U.S., all over," said Jo Bachelor, head of sales at Encore Tickets, which sells one in five tickets in London's West End, 45 percent of which are to overseas visitors.

Overall, she said, the firm's international sales for shows like "The Lion King," ''Wicked" and "The Phantom of the Opera" are 8 percent ahead of budget, and would have been higher were it not for security concerns raised by the terror attacks in London, which weighed particularly on travelers from Japan and school trips from Europe.

Encore's performance this year is illustrative of what is going on in British travel and tourism — a Brexit bounce.

Official figures released Friday showed overseas residents made 3.9 million visits to Britain in August, up 5 percent on a year earlier. They also spent 2.8 billion pounds ($3.7 billion), up 3 percent. So far in 2017, according to the Office for National Statistics, visitor numbers have risen 8 percent to 27.1 million while tourist earnings have swelled 10 percent to 16.4 billion pounds.

The lower pound should be a boon to exporters, but not all sectors are enjoying the same rewards, partly because many firms, particularly those in manufacturing, have seen their costs rise as imported goods like energy have become more expensive because of the currency's fall. Many firms have also been reluctant to invest in their businesses amid the Brexit uncertainty.

As a result, the wider British economy has slowed. Before the June 2016 Brexit vote, the British economy was one of the fastest-growing major economies. Now it's one of the slowest and most forecasters expect tepid growth for as long as uncertainty surrounds Britain's future economic relationship with the EU, its main trading partner.

Britain is due to leave the EU in March 2019 but many businesses, particularly in the finance sector, have warned that they could start putting plans to relocate into Europe into action early next year if no progress in the Brexit talks is seen. Thousands of jobs are predicted to be leaving London for other cities on the continent.

The British travel and tourism sector does not operate in a bubble. It, too, is nervously awaiting the outcome of the Brexit discussions.

In the event of a "no deal" scenario, in which Britain crashes out of the EU and puts up restrictions on goods, services and people coming into the country, the sector would not be immune. The implications of "no deal" would likely be felt far and wide in the travel and tourism sector, not least in Spain, the No. 1 destination for Britons, as well as Ireland, the only EU country that the U.K. shares a land border with.

Roxanne Keeney, operations and business development at sports ticketing agency Champions Travel, said any Brexit scenario that sees customs barriers and other restrictions going up, could have "a really detrimental impact" on the firm. Champions Travel, which sells tickets for Premier League soccer matches primarily to European customers, operates out of Donegal in northwest Ireland, on the border with Northern Ireland.

"It could be a whole lot more difficult for people to travel easily into Britain using our packages," she said.

While the lower pound has been a boon to inbound tourism, there are signs it's weighed on travel abroad by making holidays more expensive for the British. That matters as the British are the fourth-largest spending nation on travel abroad, according to Euromonitor.

According to the statistics agency, the number of Britons travelling abroad during August, the top month for families to go abroad, fell 3 percent on the year before to 8.9 million.

The picture is not so clear-cut though as British residents spent 6.2 billion pounds on their visits abroad, up 1 percent on a year ago. And overall in 2017, the figures suggest the British are reluctant to give up on their treasured time abroad. The number going overseas so far is up 3 percent to just under 50 million and they spent nearly 31 billion pounds, or 5 percent more than the year before.

The British, according to Nick Longman, managing director of U.K. and Ireland operations at TUI, the world's biggest travel firm, still view holidays as an "absolute must."

Love among the ruins: couple shows beauty in Hurricane-ravaged USVI