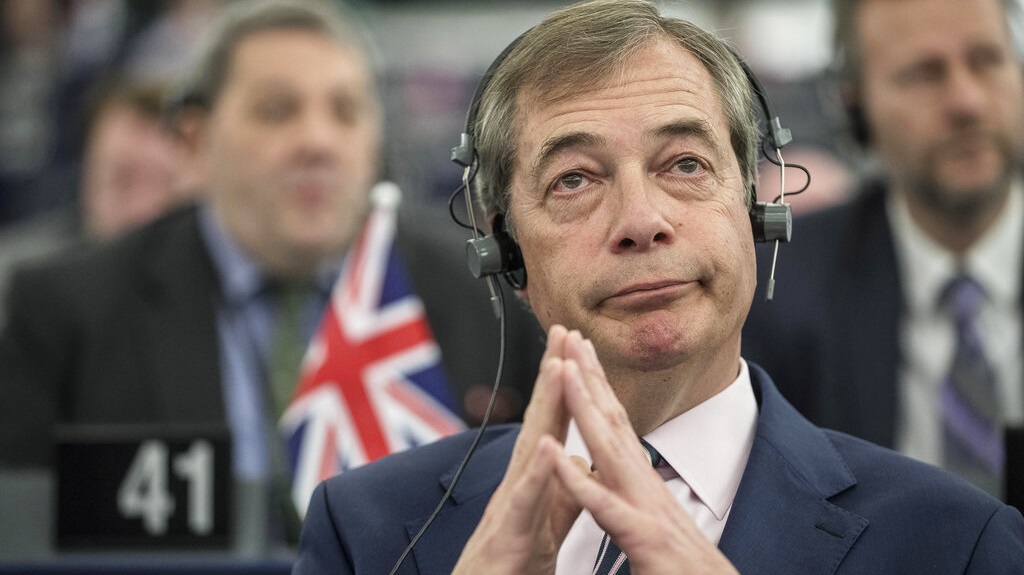 In a major shift, Brexit Party leader Nigel Farage says his party will not run against Conservative candidates in almost half of the UK seats available in Britain's December 12 election.

Farage said Monday that the party will not run in 317 Conservative-held seats so it does not split the pro-Brexit vote, an announcement that should boost the chances that Prime Minister Boris Johnson's Conservatives win a majority.

Farage has been under huge pressure from Brexit supporters not to run candidates in seats where there is a risk of splitting the Brexit vote. Monday's move represents a major change in tactics, for only last week Farage had threatened to run against the Conservatives in every race in the nation — 650 seats are up for grabs — unless they agreed to team up with his Brexit Party.

Johnson refused the offer, which included a demand that he drop his Brexit deal, saying that the Conservatives aimed to win.

Farage said the party has "unilaterally" formed a Leave alliance to prevent a coalition of parties that want to stay in the European Union from winning.

Over the weekend, several right-wing British newspapers urged Farage to change tack, saying there was a risk that Britain might not leave the EU if the Labour Party comes to power.

Labour has vowed to renegotiate the Brexit divorce deal with the EU, then hold a new referendum for British voters to decide on whether to leave the bloc on those terms or remain.

On the campaign trail, Labour and the Conservatives were using Armistice Day to showcase their plans to improve the lot of veterans if they win the December 12 election.

Johnson's party on Monday unveiled proposals to make it harder to bring veterans to court over allegations of abuse that took place before the Human Rights Act took force in 2000, and announced a series of measures to help veterans get jobs.

Also on Monday, Corbyn's foreign policy adviser, Emily Thornberry, raised questions about Britain's nuclear deterrent when she told ITV it is not clear that Corbyn as prime minister would use nuclear weapons if Britain is threatened.

"It's impossible, I think, for any human to say whether they would be prepared to kill millions," she said.