Bridgemans says media reports on its company were "destructive" 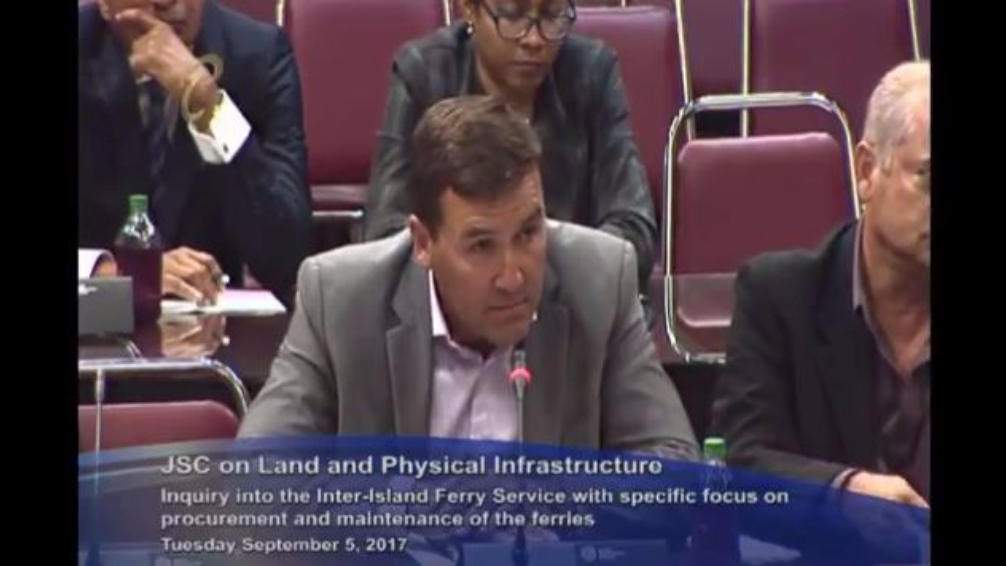 A joint select committee on Land and Physical Infrastructure has continued its second public hearing pursuant to the enquiry into the Trinidad and Tobago Inter Island Ferry Service with a specific focus on the procurement and management of the ferries.

In part two of the hearing on Tuesday evening, Vice President of the Bridgemans Services Group, Andrew Purdey, voluntarily participated in an attempt to clear the company’s name.

Purdey said the organisation, which is based in Vancouver, Canada, had its reputation dragged through the mud with T&T’s ongoing sea bridge woes.

He believes a hidden agenda was responsible.

“Once we’ve seen that the Government reacted to this destructive and inaccurate media, we had to start taking steps.  We’ve tried to attempt to get the clarity out, provide the facts. No one's come to me until today and said, ‘can you tell me the facts?’ and I’m here to give you all the facts but I want to bring it to an end because our reputation far exceeds anything we do here in Trinidad. We’re more focused on the long term success of our company and the damaging and effects that we’ve had here that are completely driven by some agenda we have no idea on.”

Committee member Wade Mark took the opportunity to raise concerns as to the legitimacy of the company and pointed to discrepancies between Bridgemans and the Port Authority of Trinidad and Tobago (PATT).

Mark questioned whether Purdey was aware that PATT said it contacted Bridgeman’s through the Works and Transport Ministry. Purdey however, denied this. He said the Bridgeman’s Group was in fact contacted by an international broker called Horizon in order to service the Port Authority.

“I have a record of when our contacts were, very accurately outlined. Our initial startup was with the agents and that’s how 80% of our work is done globally, is agents contact us with opportunities and we work with the agents to develop a submission.”

Mark also questioned whether Bridgemans owned the ships which were expected to be leased to Trinidad and Tobago, through the Port Authority.

“We had an effective ownership through a MOA that had a 48-hour line so we were going to purchase the ships on execution of the contract. The contract was executed, we purchased the ships and then the ships were demonstrated to be in our full ownership before the contract came alive.”

In his company’s defence, Purdey also noted that the Bridgemans Services Group has been in existence since 2013 with five board members. He said the company currently owns four vessels including the Cabo Star and the Ocean Flower two which will both no longer serve T&T. He also noted that the company had over 100 employees and a range of offices around the world.

Mark, however, appeared to be unconvinced, questioning whether the organisation was certified with the Board of Inland Revenue to be tax compliant to operate in T&T.

The Managing Director of the Ken Shipping and Marine Services Company interjected on Purdey’s behalf, noting that this was not done. He said, however, that the Bridgeman’s Group was working assiduously to set up its local branch.

Purdey admitted that he was not aware of this development but committed to rectifying the problem.