Brief showers cause flooding in parts of North Trinidad 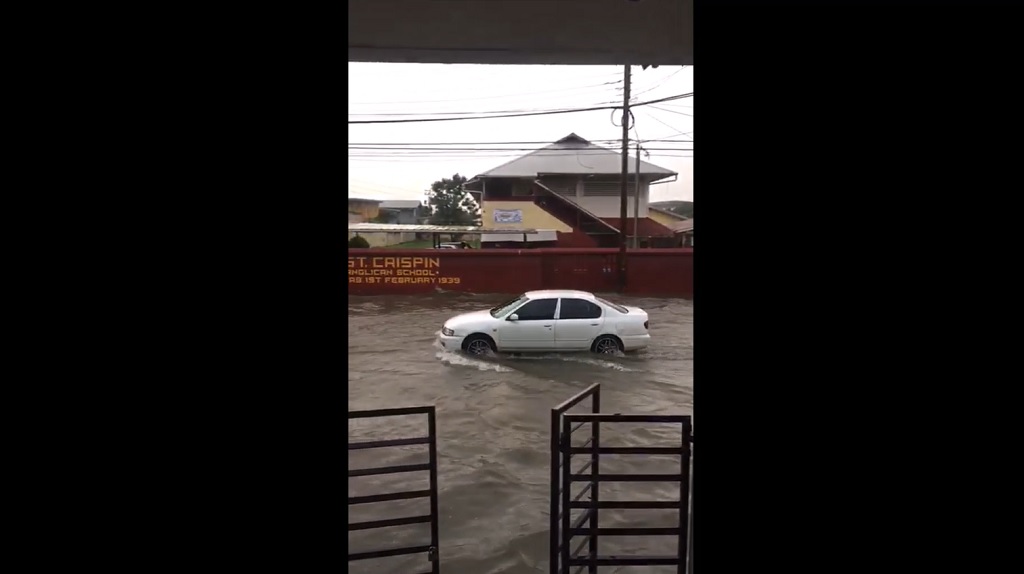 Brief showers in Port of Spain and other parts of North Trinidad once again led to difficulty for commuters as roadways became temporarily inundated with floodwaters.

Video footage showed flash flooding on Ariapita Avenue and parts of Santa Cruz, however these conditions cleared up after a few hours.

Following the passage of Tropical Storm Karen, flash flooding was reported across parts of Trinidad and Tobago in September 2019.

The Trinidad and Tobago Meteorological Service warned of a higher risk of flooding along with hot spells for the months October to December, 2019.

Minister of Works and Transport, Rohan Sinanan, said his Ministry is working on pump systems which will help to alleviate flooding in the capital, which is prone to flooding during heavy rainfall and high tides.

Riverine flooding is an overflow of water from rivers, which happens when a river’s water holding capacity is exceeded in an area and the river banks are overtopped. Riverine flooding usually occurs after extended periods of rainfall.

Flash flooding is a rapid onslaught of raging waters caused by heavy rainfall in relatively short periods - within a period of minutes to hours (usually less than 2-3 hours in T&T). Flash flood events are very unpredictable as they can occur with little or no warning. Flash floods can develop in watercourses as well as over land.

Street flooding is a local term used to describe an accumulation of water along the streets of urban areas that are commonly lower than the pavement areas. This typically happens in Trinidad along the east-west corridor due to runoff from the elevated areas of the nearby northern range.

In Tobago, it favours Bon Accord and Scarborough. Street flooding may also occur in other areas such as those where debris or litter block the outflow of street water or where the drainage is inadequate alongside streets.

Coastal Flooding occurs in coastal regions that are not normally inundated with water. Coastal floods may originate from inland due to excessive or heavy rainfall that collects within or runs off into coastal areas. Coastal flooding may also occur due to inundation by higher than normal tides -such as spring tides, storm surges - associated with tropical cyclones or wind-driven seas forced into the coastal areas.