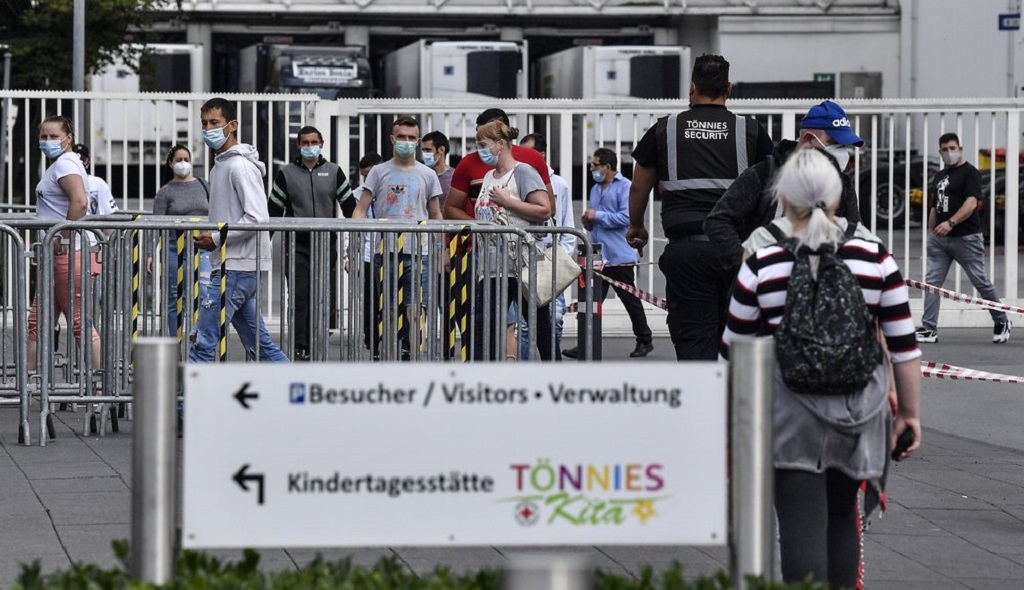 Britain lowered its coronavirus threat level one notch Friday, becoming the latest country to claim it's getting a national outbreak under control.

The UK's Joint Biosecurity Center recommended moving the COVID-19 risk in the country from the second-highest level, 4 - meaning transmission is high or rising exponentially - to level 3, where an epidemic is in general circulation.

Health officials say there's been a steady decrease in cases across the UK but localized outbreaks are still likely. Britain has Europe's highest pandemic death toll with more than 42,000 virus-related deaths and over 300,000 confirmed cases.

Lowering the alert level was "a big moment for the country, and a real testament to the British people's determination to beat this virus," Health Secretary Matt Hancock said.

Meanwhile, Germany on Friday reported the country's highest daily increase in virus cases in a month after managing to contain its outbreak better than comparable large European nations.

A flurry of positive tests this week from an outbreak at a slaughterhouse in the western region of Guetersloh contributed the biggest daily increase since May 20.

The German government has stuck to its course of gradually reopening the country while seeking to clamp down swiftly on localized outbreaks..

A free app launched Tuesday to help trace people who may have been exposed to the virus has already been downloaded 9.6 million times in Germany, which has a population of 83 million.

Japan released a similar app Friday, also using technology developed by Apple and Google. Officials say data will only be recorded and stored in individual users' phones and deleted after 14 days to protect their privacy.

"We hope a widespread use of this app will lead to prevention of infections," Japanese Health Minister Katsunobu Kato said.

Singaporeans were able to wine and dine at restaurants, work out at the gym and socialize with up to five people at a time as of Friday, after the city-state removed most of its pandemic lockdown restrictions.

"It was a long-awaited experience," said Thomas Tan, a 34-year old customer service officer eating in an outdoor market. "It's good to be able to eat outside with friends but there still must be social distancing."

After at first appearing to have been a model for containing the virus, the country of only 5.8 million has one of the highest infection rates in Asia with 41,473 cases, mostly linked to foreign workers' dorms. Authorities say such cases have declined, with no new large clusters and a stable number of other cases despite a partial economic reopening two weeks ago.

Wee Cheng Yan, a gym trainer, said it felt good to return to work after two months at home.

"Definitely, interaction has been lacking the past few months," he said. "Watching a lot of TV. Doing a bit of resistance band training, which is not as effective as working out in the gym."

The reopening of stores and other public places has been blamed for touching off fresh spikes in infections in a number of countries, raising questions for governments about how to tread the line between keeping economic and social life going while avoiding unnecessary deaths.

China declared a fresh outbreak in Beijing under control after confirming 25 new cases among some 360,000 people tested. That was up by just four from a day earlier.

A Chinese Center for Disease Control and Prevention official said the number of cases was expected to fall soon in outbreak centered on Beijing's main wholesale market. So far Beijing has confirmed 183 new cases over the past week.

The 25 new cases reported Friday in Beijing were among 32 nationwide in China, four of them in Chinese who had returned from overseas.

Such outbreaks are inevitable, Wu Zunyou of the Chinese Center for Disease Control and Prevention told a news conference. But he stressed that prevention measures should not slacken.

Beijing suspended classes and put opening-up plans for everything from sports events to art exhibitions on hold. Bus travel to other regions was suspended to prevent the spread of the outbreak.

The pandemic is waxing and waning in many places, with numbers of cases soaring in Indonesia and India, Brazil and Mexico but appearing to be under control or contained in Thailand, Japan, Vietnam and New Zealand.

India recorded 13,586 newly confirmed cases on Friday, raising its total to 380,532. Still, shops, malls, factories and places of worship have been allowed to reopen while schools and cinemas remain shuttered.

Infections surged in rural areas after hundreds of thousands of migrant workers left cities after losing jobs in a lockdown announced in late March. Such precautions are now restricted to high-risk "containment" zones.

In South Korea, outbreaks have inspired second-guessing on whether officials were too quick to ease social distancing guidelines in April after a first wave of infections waned. Officials reported 49 cases of COVID-19 on Friday as the virus continues to spread in the densely populated capital area of Seoul, where half of its 51 million people live. About 30 to 50 new cases have been confirmed per day since late May.

The new coronavirus has infected more than 8.5 million people worldwide and killed more than 454,000, according to figures compiled by Johns Hopkins University. The actual number is thought to be much higher because many cases are asymptomatic or go untested.

In the United States, which has reported the most confirmed cases at nearly 2.2 million, states have pushed ahead with emerging from full or partial pandemic shutdowns despite surges in new cases in many places, including Texas, Oklahoma, Florida and California.

New cases skyrocketed Thursday in Oklahoma by 450, double the record-setting number reported two days earlier. Tulsa County, where President Donald Trump plans a rally on Saturday at an indoor arena, remained the state's leading hot spot with 120 new cases for a total of 1,825.

Aid group Doctors without Borders said Friday that at least 10 cases of COVID-19 were confirmed at one of the world's largest refugee camps, the sprawling Dadaab complex in Kenya.

Humanitarian organizations have warned that the virus could have devastating impacts on crowded refugee camps, especially as travel restrictions have made the delivery of aid increasingly difficult.

At the Kakuma camp in Kenya, which recorded its first case earlier this month, Congolese refugee Aisha Regina said that if the virus spreads there "then all of us will perish. There is no space where one can stay away from the other."

A drug offers hope amid spikes in coronavirus infections