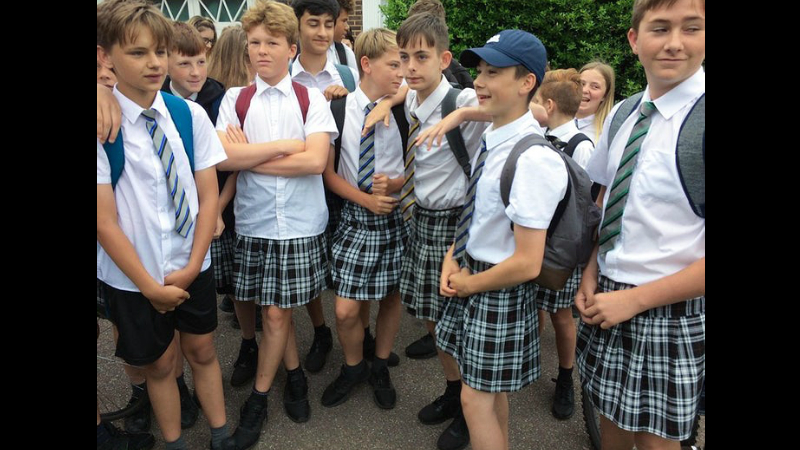 Pupils at Isca academy say boys from every year group have been taking part in the uniform protest. (Photo: BBC/Apex)

Boys at a British high school have found a novel way around strict uniform rules banning shorts, as the country swelters through a heatwave.

The schoolboys at Isca Academy in the southwestern city of Exeter donned skirts instead of the officially mandated gray slacks.

Devon County Council spokesman David Beasley said about 30 boys turned up to school in skirts on Thursday, when temperatures dropped to a cool 20 degrees Celsius (68F) after days of much hotter weather. None of the skirted students was punished, he said.

The school's head teacher, Aimee Mitchell, issued a written statement that did not mention the skirts, but pledged to revisit the uniform rules.

"We recognise that the last few days have been exceptionally hot and we are doing our utmost to enable both students and staff to remain as comfortable as possible," she wrote.

"Shorts are not currently part of our uniform for boys and I would not want to make any changes without consulting both students and their families. However, with hotter weather becoming more normal, I would be happy to consider a change for the future," she added.

The British students were not alone in challenging dress codes as a way of cooling down.

In the western French city of Nantes, male bus drivers reportedly wore skirts this week that are part of female drivers' uniform to protest the fact that they were not allowed to wear shorts.

Beat the Heat: How to deal with hot flashes in Menopause

5 Caribbean acts that rocked the jumpsuit