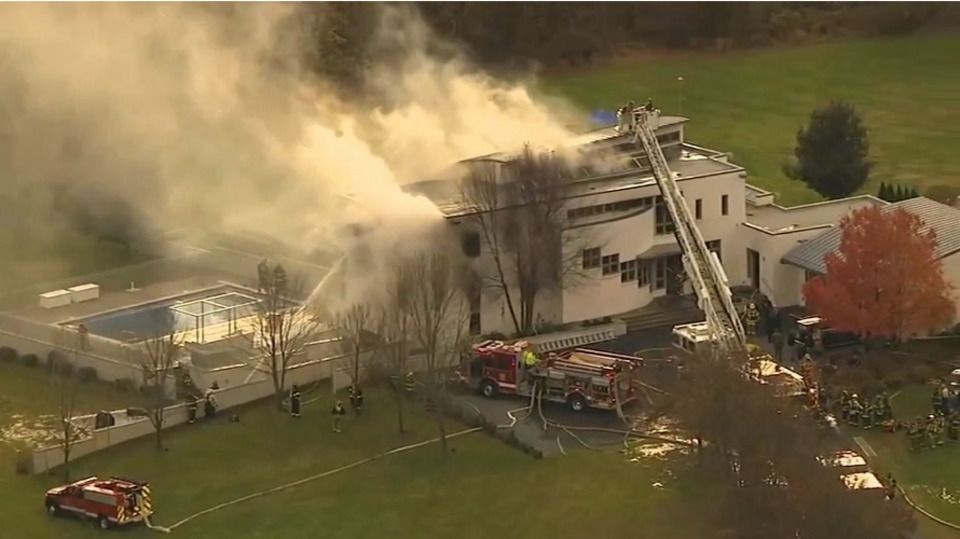 A family of four whose remains were found at the burned-down ruins of their New Jersey mansion was slain before the home was set ablaze, authorities said Wednesday, hours after the mansion owner's brother was arrested on suspicion of arson at his own house.

Prosecutors sought to reassure the public that a random killer was not on the loose in the affluent community of Colts Neck, which is also home to some celebrities.

"We believe that this family in some form or fashion was targeted," Monmouth County Prosecutor Christopher Gramiccioni said.

Paul Caneiro, 51, was charged with setting fire to his home Tuesday in Ocean Township. Less than eight hours later, the fire that destroyed his brother's home was reported about 80 miles (129 kilometres) away in Colts Neck, authorities said.

Gramiccioni said he could neither confirm nor deny that Paul Caniero was a suspect in the slayings.

At the mansion, Keith Caniero, 50, was found shot to death on the lawn. Inside, authorities found the remains of his 45-year-old wife, Jennifer Caniero, and their children, 11-year-old son Jesse and 8-year-old daughter Sophia.

The bodies of the mother and children were badly burned. Medical examiners had not determined causes of death for them as of Wednesday afternoon.

It was not immediately known if Paul Caniero had retained an attorney. He was charged with aggravated arson and was scheduled to make a first appearance in court next Wednesday.

Paul Caneiro was accused of using gasoline to set his home on fire while his wife and two daughters were inside. No one was hurt in that blaze, which was reported at 5 a.m. Tuesday, about 7 ½ hours before the Colts Neck fire was reported.

Keith and Paul Caneiro were partners at a technology firm in Asbury Park called Square One.

All four members of Keith Caniero's family were "victims of homicidal violence," the prosecutor said, adding that there was no indication of suicide.

The community held a vigil for the family Wednesday night. Colts Neck Mayor J.P. Bartolomeo said the Caneiros were well known in town and often seen at local shops or school sporting events.

Colts Neck, about 50 miles (80 kilometres) south of New York City, is home to a number of celebrities, including Bruce Springsteen. Former "Daily Show" host Jon Stewart and his wife operate an animal sanctuary there. Queen Latifah sold her mansion there in 2015. Current and former members of the band Bon Jovi have also called it home.

Convicted murderer quiet on why he killed wife, daughters