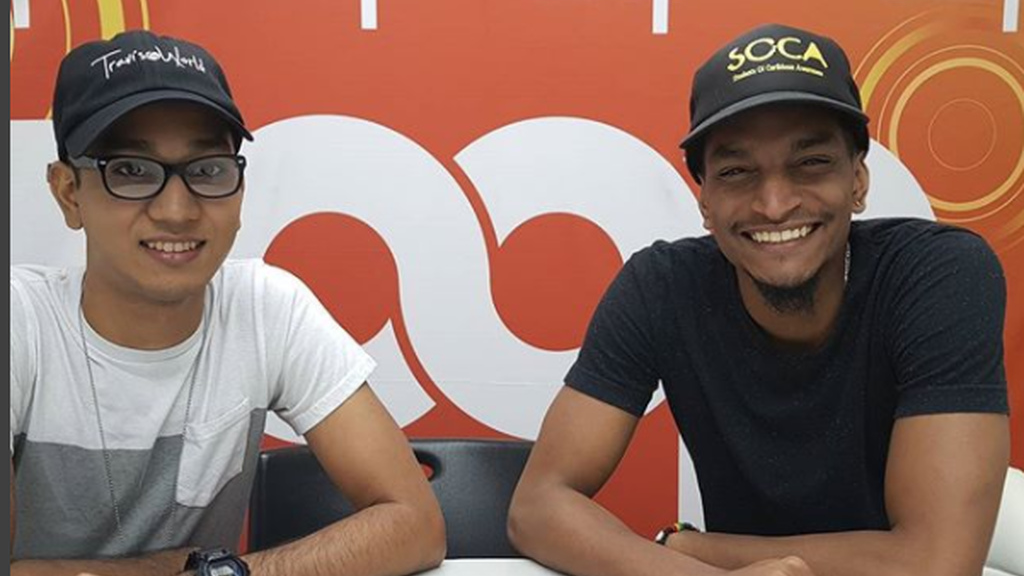 The countdown is on to Carnival Monday and Tuesday and the competition has shifted into full gear to see who would reign supreme as the king of the road.

Machel Montano and Iwer George have been doing the most, hitting every stage possible in their bid to outdo each other to win the Road March.

Behind the scenes, however, the two young men responsible for ‘Soca Kingdom’ and ‘Savannah’ are talking about one day working together.

Travis Hosein aka Travis World, 22, and Kyle Phillip, 23, are the men who produced the two songs that have been dominating the Road March debate for the last two weeks.

They are both from San Fernando, both in their 20s and both represent the new generation of producers fuelling the veterans.

The duo has known each other for years and has mutual friends.

“Kyle and I are friends. We lime with the same circle of people so I knew him before he was into production and I knew of his brother (Kasey of Precision Productions). We never used to talk so much but now we know each other is into production so we cool now,” said Travis.

If the stars had aligned in their favour, ‘Soca Kingdom’ may have been a collaboration with the two producers.

Travis said he sent the song to Kyle and Keegan Taylor, both of Badjohn Republic, the production outfit behind the 2016 Road March ‘Waiting on the Stage’ and 2017’s ‘Busshead’  before sending it to Montano.

“We started the song and the writer, Prince Pronto, disappeared, so in trying to figure out how to finish the song I sent it them, but unfortunately we didn’t get to work on it and then the writer resurfaced,” he said.

He insisted however that he and Kyle are cool and there is no rivalry.

‘I feel more proud that we are both from South at the forefront of the work. It is a friendly rivalry but I don’t see it as that. I see it as us doing the work,” said Kyle.

He said even the artists don’t have that bad energy, acknowledging that when it comes to the music there is a war but the artists are friends.

Son of veteran producer and businessman Kenny Phillips, Kyle said ‘Savannah’ was brought to him by Iwer’s manager Andre Jeffers of Perception Management.

“The man who brought it to me said lemme explain why I wrote this. He said long time when people went to parties they came back sweaty and stink and I want to start that back a lil bit. He said he want to mash up the place and with a lot, a lot of work came Savannah,” said Kyle.

He said the song had several names.

“It was first called ‘Weatherman’, then ‘No Barricade’ then ‘Savannah’.  I didn’t think it would become what it did, not even remotely. I was at the point I was happy to get it out,” he recalled.

Travis too had to go through versions of the song before it became what it is today.

“When I started the beat it started off as an experiment, it started off as Future Bass, an EDM genre. I was just playing around and I stopped for a second and thought how these chords would sound with some soca drums. I put some real emotional chords in it and I said this is something I need to finish and see. I linked with Prince, who is fairly new in the game, left him in studio two/three hours, and he had the first minute or so of the song. The second time I listened to it and I said this sounds like a Machel song. Initially it was called ‘Wine and Rough it up’ but when Superblue heard it he said the song had to have a message, even if you have to leave a one line and one word,” he said, noting that it took four days of recording from 7 pm to 10 pm for Machel to get the song the way he wanted.

Asked his thoughts on ‘Soca Kingdom’, Kyle said while he likes the chords and lead lines, he isn’t fond of Superblue’s chorus.

Expressing his views on ‘Savannah’, Travis said at first listening, he didn’t feel it but thinks it is a good contender.

Winning the Road March, would, of course, mean the world to either guy. For Travis, capturing the title with two former Road March kings would be a huge feat.

Kyle already has a Road March under his belt courtesy Machel so the winning feeling would be a familiar one although he is currently in an unfamiliar place.

Whichever song wins, the producers believe it will really be a win for the youth and heaped kudos on Machel for embracing the youth in his musical journey.

Vox Pop: Who do you think will win Road March?

After 17 years absence, Iwer is back in Road March race