Bundesliga aim to restart in May without fans hit by order 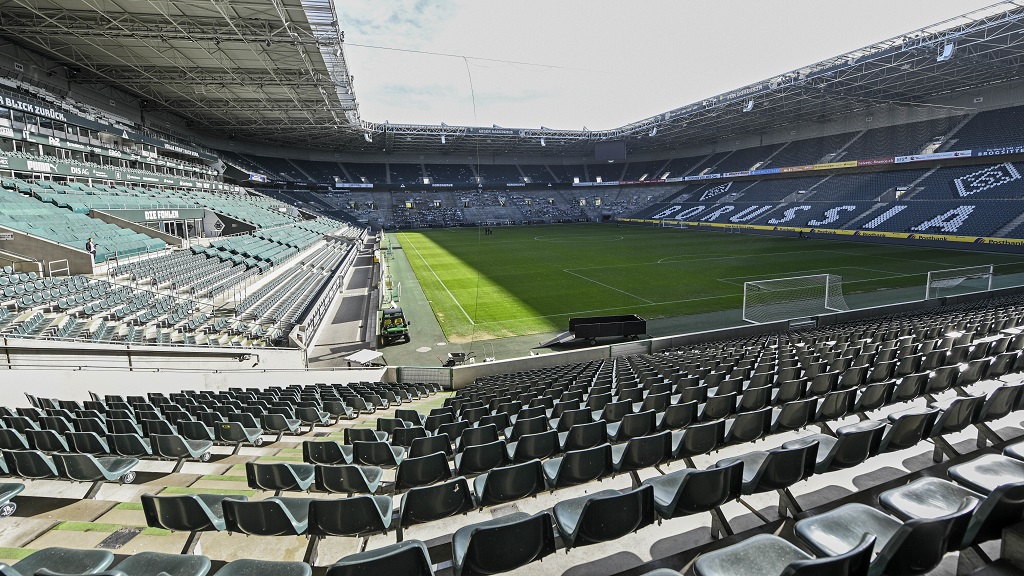 Empty seats are pictured at the stadium of German Bundesliga football club Borussia Moenchengladbach in Moenchengladbach, Germany, Thursday, April 16, 2020. All major events in Germany are suspended due to the coronavirus outbreak until the end of August, the German Bundesliga suspended all matches until April 30, 2020. (AP Photo/Martin Meissner).

Extending the ban on large gatherings in Germany to the end of August threatens football officials' aim of restarting the Bundesliga in May without spectators.

Chancellor Angela Merkel’s announcement on Wednesday, maintaining gatherings of no more than two people in public to try and contain the coronavirus, also ensures that the next Bundesliga season cannot begin as planned in August.

After talks between Merkel and the 16 state governors about easing restrictions, Bavaria’s Markus Söder said the “Bundesliga wasn’t an issue,” meaning they have far bigger priorities than football.

The Bundesliga, last played on March 11, was hoping to resume in May without spectators, but the number of people needed at venues — two teams, substitutes, coaches, medical staff, security to ensure fans stay away — means even games in almost empty stadiums look like a tall order.

Complicating the issue for the German soccer league (DFL) is that each of the country’s 16 states can set their own conditions. It’s very likely they will differ, meaning some games could be allowed and others not.

“I don’t think the landscape in soccer will be the same after the corona crisis,” Keller said last week. “We’re going to miss a few (clubs), and I think that the longer it continues, the more bankruptcies we’re going to have in professional soccer.”

Schalke and Paderborn in the Bundesliga are reportedly facing insolvency, while Kicker magazine says 13 clubs in the second division are also under existential threat if a delayed installment payment for television rights is not made to the DFL.

The magazine reports that Sky, DAZN and ARD missed a payment of 304 million euros ($331 million) — the last of four installments for TV rights for the two divisions — to the league on April 10, but the broadcasters have agreed to pay on May 2.

“We can manage another one or two months, but then we’re out of air,” Paderborn managing director Martin Przondziono told broadcaster Sport1. “If the TV money doesn’t come, it will be tight for us.”

Schalke has made no secret of its financial problems caused by the pandemic despite a sponsorship arrangement with Russian energy giant Gazprom reportedly worth 30 million euros per season.

“It’s about existence!” Jobst wrote in an email on March 17.

“We’re trying to reduce costs, have reduced employees’ working hours and agreed wage cuts with the players,” Peters said on Facebook. “But of course everything depends on when we can take in income and play football again.”

The clubs are to meet again on April 23 to discuss how they can end the season as planned by June 30.

As of Thursday, Germany had nearly 135,000 registered cases of COVID-19, with 3,804 deaths attributed to the disease, according to Johns Hopkins University.

Bundesliga aiming for early May restart behind closed doors

Footballers can live for six months without getting paid, says Tevez