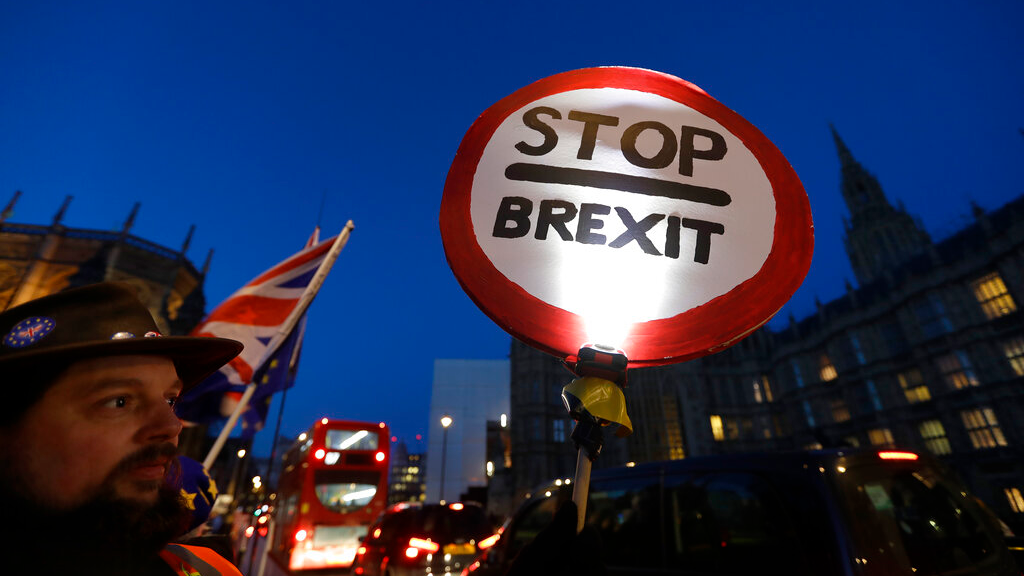 A senior British Cabinet minister said Wednesday that businesses need to prepare for the possibility the U.K. will leave the European Union in March without an exit deal, as a growing number of firms braced for disruption by stockpiling goods or shifting operations overseas.

"We know that the law in the United Kingdom says that on the 29th of March the European treaties will cease to apply to a U.K., so the only way we can stop that happening is to come to an agreement," Fox told the BBC from the World Economic Forum in Davos, Switzerland.

Most U.K. business groups fear a "no-deal" Brexit will cause economic chaos by ripping up the trade rulebook and imposing tariffs, customs checks and other barriers between the U.K. and the EU, its biggest trading partner.

The Bank of England has said that in a worst-case scenario, a cliff-edge Brexit could trigger a deep recession, with Britain's economy shrinking 8 percent within months as unemployment and inflation soar.

Carolyn Fairbairn of the Confederation of British Industry said British politicians must rule out a no-deal Brexit, calling it "the only way to halt irreversible damage and restore business confidence."

With Brexit just two months away, companies are acting to cushion themselves against disruption.

Ferry operator P&O said it would re-register its U.K. fleet under the flag of Cyprus so it could continue to use EU tax arrangements after Brexit.

Electronics firm Sony announced this week that it will move its European headquarters from London to Amsterdam to avoid potential customs complications after Britain leaves the EU — one of several companies shifting its legal base to an EU member state. Sony said it did not plan to move jobs from Britain.

While many firms worry about the impact of Brexit, some senior business figures support it, including James Dyson, founder and chairman of appliance manufacturer Dyson. The vacuum-maker was accused of hypocrisy by Brexit opponents after announcing Tuesday that it is moving its head office from southwest England to Singapore.

The firm said it was making the move because of the growing importance of the Asian market, rather than because of Britain's impending EU exit.

But Solicitor General Robert Buckland, who represents an area near Dyson's British HQ, said "I'm disappointed to say the least that at this time a company led by a person who advocated Brexit has decided to relocate outside of this country."