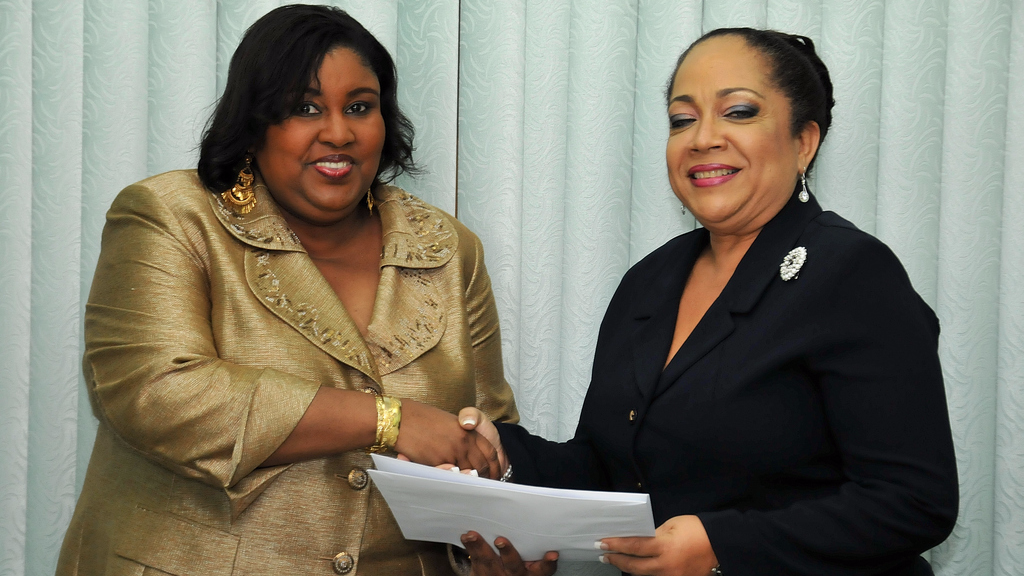 In this January 2010 photo then Minister of Community Development, Culture and Gender Affairs Marlene McDonald (Left) presents the instrument of appointment to chairman of the NTC Denyse Gouveia. (GISL)

The move came as no surprise, as Prime Minister Dr Keith Rowley in the past hinted that corruption-accused McDonald could return as a Minister despite being at the centre of a million dollar scandal and allegations that in 2008, she abused her ministerial power to facilitate a Housing Development Corporation (HDC) home for her partner and helped pay for it.

Hinds, a former member and trainer in the Police Service is also an experienced attorney at law with a master’s degree in constitutional law and will remain a member of the Cabinet.

In addition to McDonald’s new ministerial appointment, the Prime Minister advised President Anthony Carmona to allocate to the new Minister the responsibilities for the business of the Government, including the administration of the Departments as specified in the Schedule in accordance with Sections 3(9) and 79(1) of the Constitution.

Rowley announced his latest Cabinet reshuffle by way of a media release last night, in which a number of other significant changes were made.

Former Minister of Energy and Energy Industries Nicole Olivierre has been appointed Parliamentary Secretary in the Ministry she once headed.

Olivierre lost the portfolio in October last year in another Cabinet reshuffle. Just a month prior to that change, the then Minister appeared in a video where she seemed to have lost her patience in a confrontation with constituents outside of her constituency office in La Brea.

Olivierre, according to the statement from the Office of the Prime Minister, is a “respected professional in the energy industry and holds a Bachelor of Science in Analytical Chemistry and Computer Science as well as a Master of Philosophy in Chemistry”.

Rowley also advised the President to revoke the appointment of Senator Ayanna Lewis, and appoint Allyson West as Senator and Minister in the Ministry of Finance, to assist the Minister “in the performance of such duties as he may specify”.

The changes take effect today, but a swearing in ceremony takes place at President’s House, St Ann’s on Friday.

Opposition MP calls for Education Minister to be fired