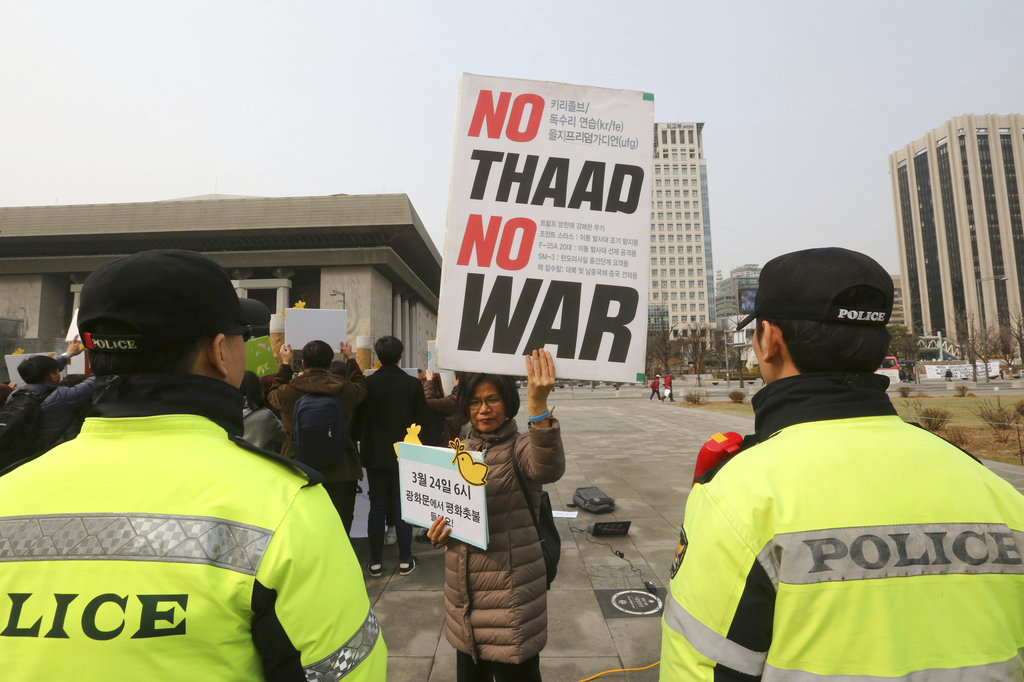 A protester holds up a banner during a rally demanding peace on the Korean Peninsula near U.S. Embassy in Seoul, South Korea. (AP Photo/Ahn Young-joon)

News of the planned summit between President Donald Trump and North Korean leader Kim Jong Un sent shockwaves around the globe. But in North Korea — as of Monday, several days after the announcement — not a word about it had been reported by the state-run media.

Pyongyang has been surprisingly quiet on the slew of momentous, and possibly even historic, events that have come in quick succession over the past few months.

It has essentially barred foreign media from visiting the country for more than a month and, while trumpeting the need for better inter-Korean relations, clung to the same anti-U.S., pro-nuclear weapons tone it struck at the height of its missile-testing frenzy last year.

Officials in Seoul say Pyongyang is keeping them in the dark as well.

"Regarding the North Korea-U.S. summit meeting, there hasn't been an official response by the North Korean government. So we think North Korea is having a cautious approach on the issue as it needs time to organize its stance," Unification Ministry spokesman Baik Tae-hyun said Monday.

It's not unusual for the North Korean media to take their time in getting out the news.

Because they are state-run, all newspapers, radio and television broadcasters and the official news agency are without fail on message. As Baik suggested, sometimes it takes a while to figure out what that message should be.

The North Korean government might have also been holding off because it's concerned the summit proposal could fall through, which could be hard to explain to their own public.

But as of Monday, the only official word of the North's offer of a summit with Trump in exchange for a moratorium on missile and nuclear tests had come from South Korea. The North's main newspaper, the Rodong Sinmun, which is run by the ruling party, had only put out a few paragraphs about a visit by senior South Korean officials last week.

It made no mention of any summit plans, let alone any conditions or statements on whether Kim is seriously mulling abandoning his nuclear weapons.

Though it warranted just a brief in the North's main newspaper, last week's meeting in Pyongyang was a big one.

It led to an agreement for Kim to have a summit with South Korean President Moon Jae-in next month. The same officials then carried to Washington a verbal message of Kim's willingness to meet Trump, which the U.S. president is said to have immediately accepted. The Trump-Kim summit is supposed to take place by May.

The lack of confirmation from Pyongyang has generated skepticism about how accurately Seoul and Washington are depicting Kim's intentions.

The silence on the summits was even more glaring because of how the North had played up the Olympic diplomacy that started it all off.

Kim used his nationally televised New Year's address to launch the first salvo of his new charm offensive, wishing for the success of the Pyeongchang Olympics and vowing 2018 would be a historic year for Koreans on both sides of the Demilitarized Zone. The annual address is a major news event and Kim's biggest regular platform for making important policy announcements.

The North then grabbed the spotlight for several days at the Olympics by dispatching a made-for-the-cameras delegation of female cheerleaders, pop singers and even Kim's own younger sister, who managed to upstage a visit at the same time by U.S. Vice President Mike Pence. Photos of her with Moon were front-page news in the North.

Not a single story was written or broadcast about the performance of the North's athletes, however.

Their best finish was 13th, in pairs figure skating.

The Latest: North and South Korea agree to hold summit