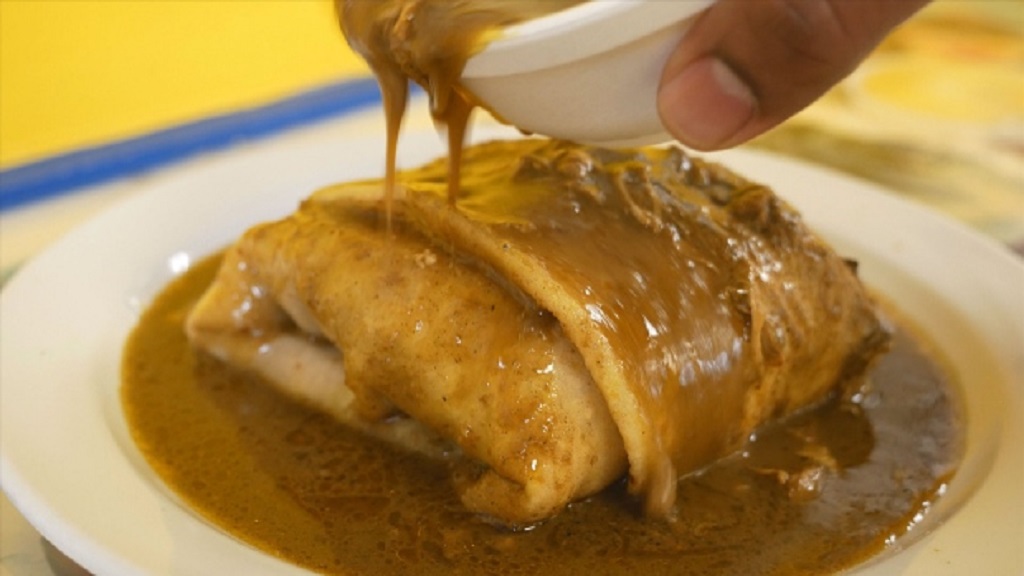 Roti lovers, how do you feel about having your roti entirely doused in curry sauce?

What about eating it with a fork?

Well…we’ve got some very interesting roti news for you.

D Hot Shoppe, a roti shop based in Canada and owned by Trinidadian couple, Simone and Gabriel Lou-Hing has taken a twist on the traditional Trini roti.

The Burlington based roti shop was recently featured on CBC News, in which Toronto based food writer, Suresh Doss examined the unique roti recipe.

“He flips it over, tucks it in, places the roti on a plate, and finishes the dish with D Hot Shoppe's signature — a generous ladle of curry to bathe the wrapped roti,” Doss wrote as he gushed about the authentic roti recipe in a recent column published on the CBC News website.

However, Doss, who has said this has now become his custom order, just didn’t stop there!

“This finishing touch elevates the roti eating experience from memorable to inimitable. I grew up eating roti across the GTA, and even the best roti can suffer from having dry pockets. The areas of the roti the curry can't get to; parched folds of roti that are not as fun to eat. Sometimes there isn't enough curry to get around. Gabriel's technique of dousing the roti wrap with another serving of curry bypasses that. The entire roti is covered with that smokey, earthy curry, plenty for every forkful of roti,” the Toronto based food writer further explained to readers.

Speaking on CBC Radio’s Metro Morning, Doss said he went to the roti shop after his friend’s mother suggested it to him, saying it would be like any other roti he had before.

Doss said he was blown away by this new culinary experience.

He said it is one of those things where it’s worth breaking from tradition.

“I love it…it’s so good, once you have it you can’t back go,” he declared.

Recently, Toronto Star health reporter, Megan Ogilvie came in for heavy criticism by many Trinidadians after she said the roti she obtained from Ali's in Toronto had too many calories and should be eaten as two separate meals.

Check out the rest of the video here: http://bit.ly/2n8nbNA

Bullet to chest and lung amid POS protests; man says shooter was cop