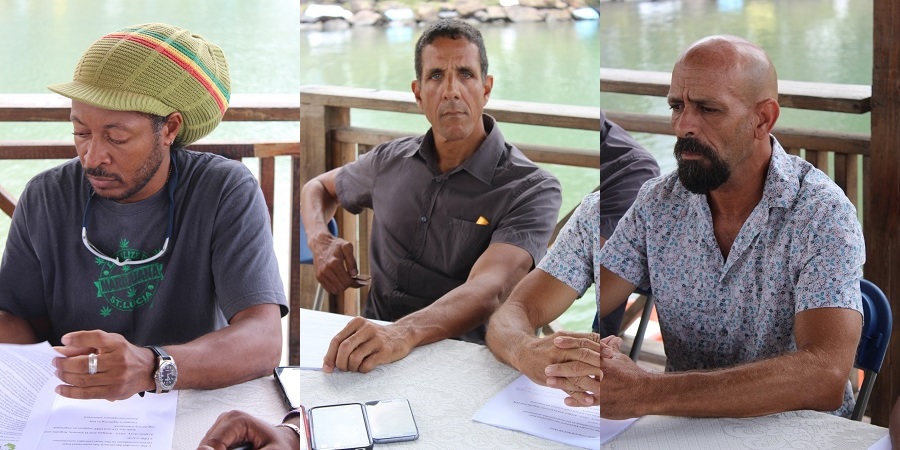 A St Lucia advocacy group is calling for the government of St Lucia to stop dragging its feet in decriminalising marijuana.

Former chairman of the Iyanola Council for the Advancement of Rastafari, Aaron Alexander, has called on Prime Minister Allen Chastanet to legalize marijuana or get onto the path that leads to its decriminalization as quickly as possible.

Alexander is a member of a group known as the Cannabis Movement of St. Lucia, which has been championing legalization for many years.

He told reporters at a news conference that the Government of St. Lucia has shown only lip service to cries of decriminalization unlike countries like Canada, Jamaica, Australia, St. Vincent and the Grenadines and Antigua, all of which have taken some action, some more advanced than others, towards legalization.

“Our politicians have been dragging their feet on this although signaling their intention to legalize cannabis,” Alexander said referring to politicians on both sides of the political fence.

According to him, the Movement made several presentations to both the past and present administrations on the economic benefits of growing ganja and industrial hemp, all to no avail.

Another member of the Movement, Randal Bain, said there is a lot more to cannabis than meets the eye in terms of it becoming an agricultural cash crop for the country. Admitting that his group never had the time to explore, experiment or do the type of research it would have liked to do on the type of products St. Lucia can derive from growing marijuana and hemp, due primarily to laws criminalizing marijuana, Bain pointed to ganja and hemp as the crops the country should be cultivating if it wants to make its agricultural sector profitable.

Alexander too spoke of hemp and cannabis as cash crops for the country and also included soya beans as being in the same category. He does not want Agriculture Minister Ezechiel Joseph to emulate former Agriculture Minister Moses ‘Musa’ Jn Baptiste who did not follow up on presentations made to him by the Movement on how beneficial growing soya beans, hemp and ganja can be to the country.

“There are lots of things government can do to create employment. There are things other than the Citizenship by Investment Programme that can create jobs. The government must be more creative,” Alexander said.

Another member of the Cannabis Movement, Andre de Caries, said the Movement was elated when last year government formed a commission to look into ways and means of decriminalizing ganja but was crestfallen when it was revealed that the commission had no budgetary allowance to enable it to do its work.

“This was a slap in the face. It goes to show the hypocrisy of government to deal with the issue seriously,’ de Caries said.

All the members of the Movement believe it is just a matter of time before St. Lucia is forced to legalize marijuana as this is the trend in the world today, however they would like the authorities to stop its persecutions of members of the Rastafari religion who have small portions of ganja on them as this is impinging on their human rights since they are being denied their sacramental use of the herb while other religions can go about using other things like bread and wine during their services.

“The whole Rastafari community has been criminalized just because of the use of cannabis. This is wrong. It is high time that the rights of the Rastafari people are respected and from a human rights perspective they should decriminalize marijuana or outright legalize it because we are tired of this constant bombardment from police and from the State. It is almost like State sponsored terrorism against rastas,” Alexander said.

“We are calling on the government to show slate on this issue. We have assisted the Cannabis Commission and so look forward to the prime minister making some serious declarations on this,” he added.

The Movement just recently presented the Commission with several amendments to the Drugs (Prevention of Misuse) Act that it hopes will decriminalize small amounts of cannabis for personal use, which incidentally, would remove a large portion of the population from contact with the justice system.

The Movement also believes that the amendments will make it possible for the formation of an industrial hemp industry from an agricultural and manufactural point of view, and for the Minister of Health, based on existing legislation, to license the use of medical cannabis (aka medical marijuana).

One amendment is for the insertion of the word ‘hemp’ under Interpretation, to read: any plant of the genus cannabis or any part of such plant with a THC content of less than 5%. This meant that, for the purpose of the Act, cannabis of less than 5% Tetrahydrocannabinol as ‘hemp’ and exempt from these regulations.

The Movement is of the view that if this is done then it would allow for the formation of an industrial hemp movement. Further, its impact on illicit use will be nil as few people would use low THC cannabis as a euphoriant as is evident by the abandonment of ‘fat leaf’ low THC cannabis leaf in the field.

Another amendment to the Drugs Act suggested by the Cannabis Movement is for the section of the Act that reads ‘Restriction of Possession of Controlled Drugs’ and which states that (1) subject to any regulations under section 10, it shall not be lawful for a person to have a controlled drug in his or her possession.

The Movement wants inserted under the aforementioned this: (a) for the purpose of this Act, possession of less than 30 grams or less of cannabis shall not be an offense under this Act. The Movement believes that this will allow for personal use and remove what has become a nuisance for enforcement

The Movement reasoned that if the assumption of trafficking clause for cannabis is to remain it will need to have an amount detailed.

Section 9 of the Drugs Act that speaks to the Restriction of cultivation of cannabis plant and which states that (1) Subject to any regulations under section 10, it shall not be lawful for a person to cultivate any plant of the genus Cannabis. And (2) Subject to section 40, it is an offence to cultivate such plant in contravention of subsection (1).

The Movement wants the word ‘any’ to be deleted and the words ‘more than 25 plants’ inserted to read: Subject to any regulations under section 10, it shall not be lawful for a person to cultivate more than 25 plants of the genus Cannabis. The Movement believes that the purpose for allowing personal growing will remove cannabis users from the illicit market place and allow for personal cultivation.