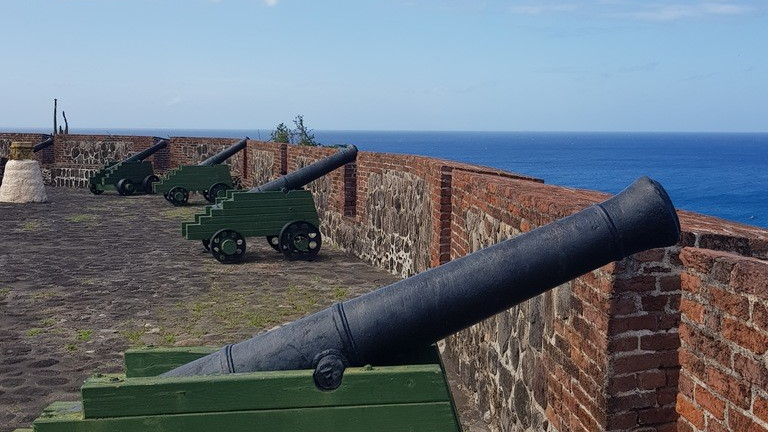 Fort Oranje in St Eustatius from where an 11 gun salute was given recognising America as an independent nation. PHOTO Laura Dowrich-Phillips

St Eustatius is a tiny island but in the 18th Century, it became a central figure in the American fight for Independence and started a war between two world powers.

Statia, as it is called by the locals, was the first country in the world to officially recognise the United States as an independent country.

Before the American Revolution, Statia was a major trading centre where ships would sail to offload slaves and goods.

During the American Revolution, American traders operated at the island due to a British blockade which made it difficult to transport supplies directly across the Atlantic Ocean to American ports.

An account on the website Revolutionary War said that it is estimated that half of all the Revolutionary military supplies were trans-shipped through St. Eustatius.

“Its merchant networks - Dutch, but also British via St. Kitts and especially Bermuda and also Jewish, many of whom were St. Eustatius residents - were key to the military supplies and goods being shipped to the revolutionary forces. US-European communications were directed through St. Eustatius,” the site said.

Had the island’s role stopped at hiding military supplies under tobacco and sugar, there probably wouldn’t be much of a story.

However, thanks to Governor Johannes de Graaff, who was born on the island, it didn’t stop there.

Shortly after DeGraaf was appointed Governor in 1776, an American ship, the Andrew Doria, sailed to Statia to purchase ammunition. The ship flew the colours of the newly formed United States.

Captain  Isaiah Robinson announced his arrival by firing a 13-gun salute, one gun for each of the 13 states rebelling against Britain.

DeGraaf, without consulting anyone, replied with an 11-gun salute from Fort Oranje, making it the first salute of international acknowledgment of American independence. The Andrew Doria was carrying a copy of the Declaration of Independence which was presented to Governor De Graaf.

Britain was obviously not pleased and complained to The Hague. DeGraaf was called to account but was allowed to return to his island. Britain, clearly still seething from losing the American war, declared war on Holland on December 20, 1780

In February 1781, a British fleet of 15 ships and 3000 troops arrived at Statia to invade the island. Governor DeGraaf surrendered and he, along with most of the Jews on the island, was deported.

St Eustatius welcomes Frenchman who crossed the Atlantic in a barrel