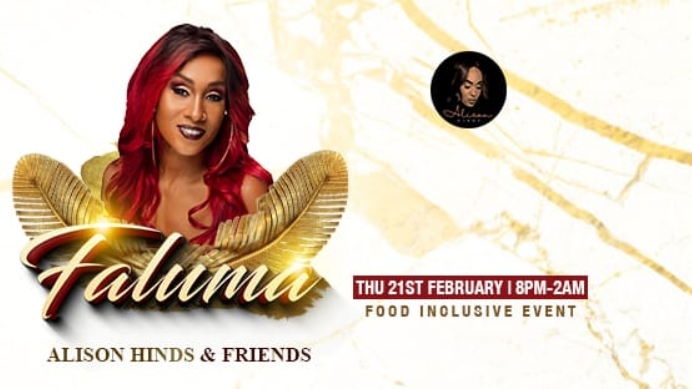 Bajan soca superstar Alison Hinds is set to host her concert Carnival concert, a tribute, she says, to her fans who have steadfastly supported her throughout her career.

Faluma: Alison Hinds and Friends will take place on February 21 and is meant to be an intimate event that will be hosted at Ohana Restaurant in Chaguanas.

In addition to the Bajan icon, guests can look forward to a number of top soca acts including Kes, Patrice Roberts, Nessa Preppy, Voice, Ravi B, Nadia Batson, Destra, and Iwer George.

While this is the first time she's hosting the concert under the moniker 'Faluma', Alison actually hosted her first concert in Trinidad last year at Woodford Cafe.

"Last year we hosted it under a different name, Bajan Invasion and Friends. At that time we had quite a lot of Bajan artists here so I wanted to highlight Bajan talent within Trinidad Carnival," she said. "We had a really small window of time to promote but we had such a great turnout; people really enjoyed all the artists...of course, I had my Trini counterparts come through. Iwer George was there, as well as Destra, Nadia [Batson], Yankey Boy. Lil Natty and Thunda touched the stage...there were a lot of artists who initially just came out to support, caught a vibe and ended up hitting the stage, it was great."

This year's concert, she said, will focus a bit more on her and the name change not only represents her through one of her signature songs but also allows the concert to be easily identifiable for years to come. "I wanted the concert to be able to translate no matter where I host it," she said.

"This year, we decided to go with a name change but we wanted to keep it in line with me and the brand. Ohana Restaurant showed great interest in partnering with us as well as the Barbados Tourism Marketing Inc (BTMI) who are sponsoring the event.

"This concert is something I really want to build and grow and become part of the Carnival calendar and be a show people look forward. With Alison Hinds and Friends, it really gives me a lot of scope to work with a lot of artists and performers and my friends.

The fact that Alison is the only non-Trini soca artist to throw her own concert for Carnival really speaks to her place as an icon in the industry. It's even more significant considering the fact that she's never hosted a concert in her hometown of Barbados.

"Trinidad has the volume [of people] and is the mother of Carnival and it's the place to get the concert established. I definitely want to get it started at home especially for the Cropover season. It's also another reason why we needed a name change...we can't exactly have a Bajan Invasion in Barbados," she joked.

The concert, for her, is a thank you to her Trinbagonian fans.

"The response that I get from Trinidadians from all walks, all backgrounds, all classes, they all just say 'Alison you is a Trini, you know you belong to we'", she said with a laugh. "And I think that me being able to do this speaks to that, it speaks that connection I've built with Trinidad and Tobago over the years from my Square One days to now being a solo artist. It's something that continually surprises me and humbles me at the same time.

"This [concert] is my way of showing love and appreciation for Trinidad and Tobago, this is for the fans, the love and support and everything that has come my way and continue to come my way as a result. I have so much love and respect for the music and culture and I want to be able to still have that synergy."

The food inclusive event will be two-tiered. For those with general access, will be offered items including wings, BBQ pork ribs, and lamb sliders. Those with VIP access will enjoy a wider variety of eats including Chinese, Indian, and Creole cuisine as well as a pork menu for the meat lovers.

Tickets for Faluma: Alison Hinds and Friends are available via Ticket Gateway for US$42 (General) and US$100 (All Inclusive).