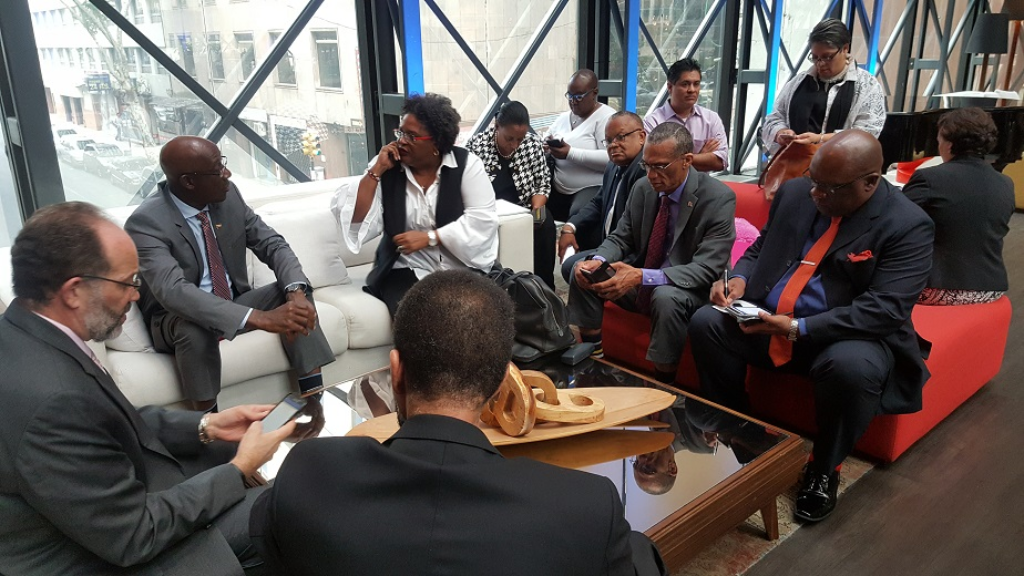 Prime Minister Dr Keith Rowley joined a CARICOM delegation which together with the governments of Uruguay and Mexico today,  formalised its plan to address the complex situation that relates to Venezuela, through an initiative called the Montevideo Mechanism.

The initiative is a response to a call by the Secretary-General of the United Nations, Antonio Guterres, to find a pathway to a peaceful resolution through dialogue and from a position of respect for International Law and Human Rights.

A statement by the Office of the Prime Minister (OPM) noted that the historical stance of the countries that have agreed to this approach is and will always be, to advance diplomacy over other alternatives, as it is the only way to achieve sustainable, legitimate and effective peace and stability.

This initiative is offered to all Venezuelan actors as a peaceful and democratic alternative.

According to the release, this mechanism is guided by the principles of Non-Intervention, legal equality of the States, peaceful solution of the controversies, respect for human rights and self-determination and is evidence of an active, proactive and conciliatory diplomacy to bring the disputing parties closer together to avoid conflict and violence.

Based on the experience of the signatory countries a four-phase process is proposed:

1 Dialogue Phase: Creating conditions for direct contacts among the actors involved, in an environment of security.

2 Negotiation Phase: Strategic presentation of the results of the previous phase to the counterparts, seeking to find common ground and areas of opportunity to allow the relaxation of positions and identify potential agreements.

3 Commitments Phase: Construction and subscription of agreements based on the results of the negotiation phase, with the characteristics and timeframe, previously agreed upon.

4 Implementation Phase: Materialisation of the commitments assumed in the previous phase, with the international accompaniment.

The subscribers of this statement agree that the complexity of the circumstances should not be a reason to dismiss the diplomatic channels for dispute settlement and reiterate its decision to help restore the tranquillity to the Venezuelan people, through dialogue and peace, reducing tensions between political forces and to avoid the threat or use of force.

Likewise, the governments reiterate their concern about the serious humanitarian situation and respectfully exhort all parties to guarantee the validity of the Human Rights and the freedoms established in the UN Charter, subscribed to by Venezuela.

This Mechanism is a proposal to guarantee a peaceful and democratic solution that prevents an escalation of violence. In the event that the parties decide to communicate, former Vice-President of Costa Rica and current Ibero-American Secretary General Rebeca Grynspan; Enrique Iglesias, ex-Foreign Ministers of Uruguay and Mexico Bernardo Sepúlveda and a High Ranking Representative of CARICOM ( to be named), all personalities of recognised international experience and moral quality, have been selected to advance this Mechanism.

The CARICOM delegation is scheduled to have further meetings one of which is a meeting with the EU delegation Contact Group at 4 pm tomorrow.