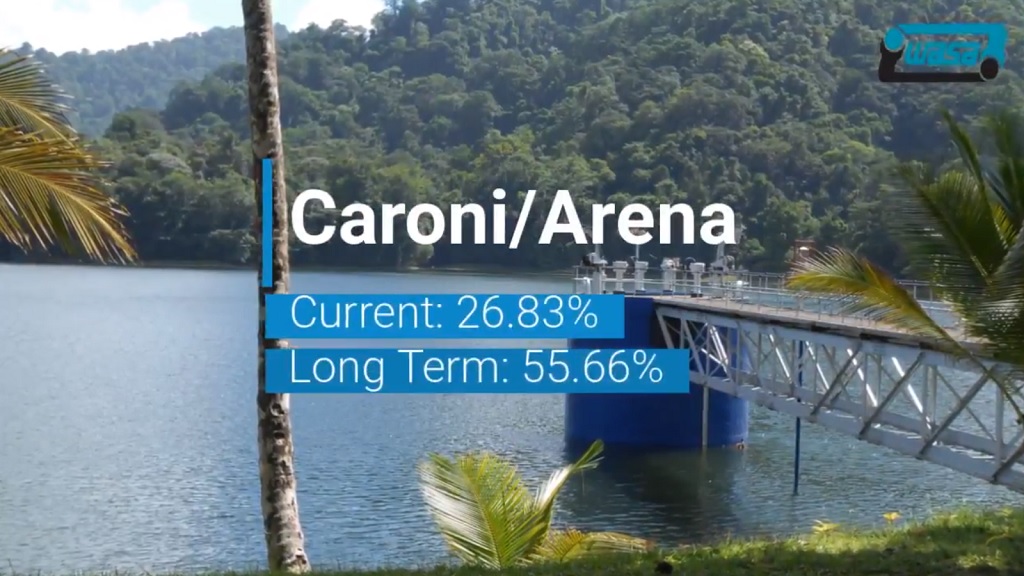 An extreme dry season has left the Caroni/Arena dam at half of its average long-term capacity for the period, and has resulted in a change to Tobago's water schedule in an attempt to conserve resources.

The Trinidad and Tobago Water and Sewerage Authority said in an update Monday that the Caroni/Arena dam was at 26.8 percent, around half of the long-term average for this period which is 55.6 percent.

Our Hollis, Caroni and Navet reservoirs are still below average for this time of year. Caroni in particular is significantly lower than its long term average. Let's continue to do our best to conserve water. #reservoirlevels #knowyourlevels pic.twitter.com/UnlSjKdvt7

"Our Hollis, Caroni and Navet reservoirs are still below average for this time of year. Caroni in particular is significantly lower than its long term average. Let's continue to do our best to conserve water."

WASA said as a result of drier-than-normal months earlier this year, there will be an adjustment to the water schedule in Tobago.

"The Water and Sewerage Authority (the Authority) advises customers throughout Tobago that, the prevailing harsh Dry Season conditions have been negatively impacting production at several of its major water treatment facilities, namely Courland, Charlotteville, Hillsborough West, Richmond and King's Bay Water Treatment Plants. As such, the Authority has been implementing various measures in keeping with its 2020 Water Supply Management Plan."

WASA said over the months of March and April 2020, there was a cumulative shortfall of 70 percent in rainfall for Tobago, compared to the long term average.

"With no meaningful rainfall thus far in May, 2020, there have been significantly lower river flows at several surface water treatment plants negatively impacting overall water production. In light of this situation, customers at the extremities or high points of several communities are being adversely affected including Crown Point, Concordia, Plymouth, Canaan, Charlotteville, Betsy's Hope, Roxborough and Goodwood."

As a result, WASA said it has made adjustments to the water supply schedules for various areas in Tobago.

This information will be available on the Authority’s website: www.wasa.gov.tt and Facebook page: WASA Trinidad & Tobago, effective Monday May 18, 2020.

WASA said it has also increased its water trucking service and has been liaising with governmental representatives, in order to service affected customers.

"The Authority wishes to assure customers that it continues to manage the water supply and demand to ensure the sustainability of supplies to our customers to assist with the fight against the Covid-19 virus. Customers are however encouraged to manage their water use wisely by engaging in proper water conservation habits."

"The Authority will be stepping up its surveillance for compliance with the water use restrictions currently in force and pursuing prosecution under the Water and Sewerage Act Chapter 54:40 of persons found to be in breach of the said restrictions."