Catalans march on Barcelona after 2 nights of violence 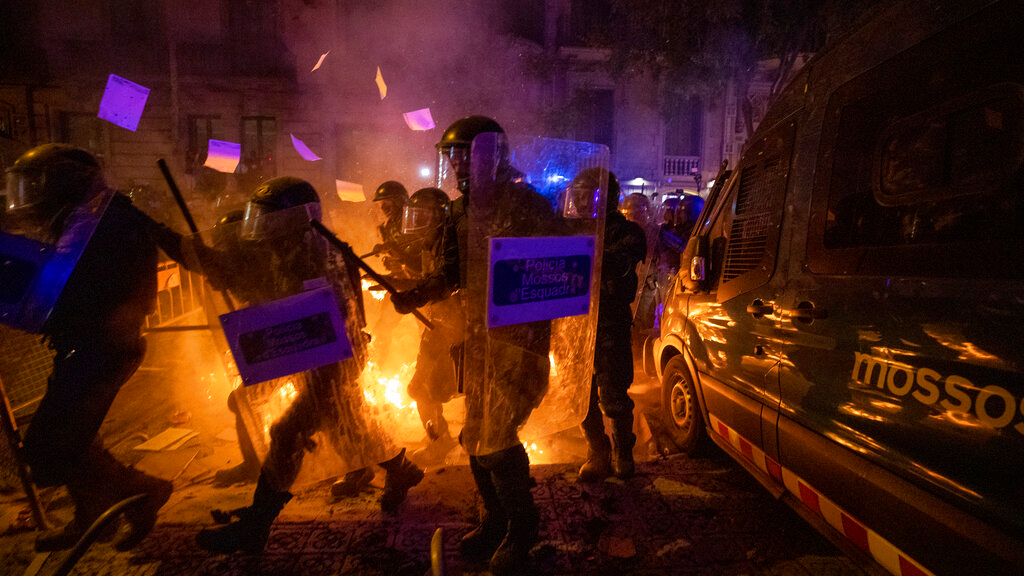 Policemen in riot gear move past a burning barricade during clashes with protestors in Barcelona, Spain, Tuesday, Oct. 15, 2019. Spain's Supreme Court on Monday convicted 12 former Catalan politicians and activists for their roles in a secession bid in 2017, a ruling that immediately inflamed independence supporters in the wealthy northeastern region. (AP Photo/Emilio Morenatti)

Thousands of people on Wednesday joined five large protest marches across Catalonia that were set to converge on Barcelona, as the restive region reeled from two straight days of violent clashes between police and protesters.

The marches set off from several Catalan towns and aimed to reach the Catalan capital by Friday.

They included families with children, elderly and young people, and banners reading "Libertat Presos Politics" (Freedom for political prisoners) — a reference to nine separatist Catalan leaders given to lengthy prison sentences by the Supreme Court on Monday, which ignited the protests.

Catalan regional president Quim Torra left Barcelona, the seat of the regional government, to join one of the marches, saying he wanted to be next to the people.

"These peaceful marches happening across the country (Catalonia) are the Catalan people's best response" to the court's verdict, Torra said.

Torra, one of the leaders of Catalonia's separatist movement which wants the wealthy northeastern region to be independent from Spain, didn't criticise the recent street violence, which national political leaders have condemned.

Peaceful protests turned ugly in Barcelona and other towns after Monday's verdict. Barcelona's police said 40,000 protesters packed the streets near the office of Spain's government representative Tuesday evening and a running melee broke out when they turned over metal barriers and threw objects at police.

The outnumbered police used foam bullets, batons and shields to battle groups that rained down rocks, firecrackers and other objects on them.

Police made 29 arrests in Barcelona, the Catalan capital. More than 150 barricades in the streets were set ablaze by protesters, according to the ministry.

Similar protests turned toward violence in other towns in Catalonia, which has seen a rise in separatist sentiment for the past decade. Roughly half of the region's 7.5 million residents support independence, with the other half opposing a breakaway, according to polls.

Students in the restive region went on strike Wednesday, with organisers urging them to remain peaceful, like the majority of separatist rallies have been before this week.

The marches and sporadic street protests continued to snarl traffic across the wealthy region. Flights and passenger movements at Barcelona airport have also been disrupted by protests.

Traffic in downtown Barcelona was also slowed by the massive cleanup effort to remove the debris of burned barricades and trash.

Spanish acting Prime Minister Pedro Sánchez, who is facing a national election on November 10, began to meet with the leaders of the main opposition parties to discuss the situation in Catalonia.

"(I want to issue) my firmest and complete condemnation of the violence that is trying to shatter the social harmony in Catalonia," Sánchez wrote on Twitter. "All support for the forces of security."

Gabriel Rufián, a leading Catalan separatist and member of Spain's parliament, and some other high-profile secessionists, called for calm.

Most impromptu protesters have responded to an online campaign by Tsunami Democratic, a shadowy grassroots group that uses encrypted messaging apps to call for peaceful disobedience.

But on Wednesday, the group issued a statement appealing for an end to the violence.

The Supreme Court found nine of 12 Catalan politicians and activists guilty of sedition and gave them prison sentences of nine to 13 years. Four of them were additionally convicted of misuse of public funds. The other three were fined for disobeying court orders.