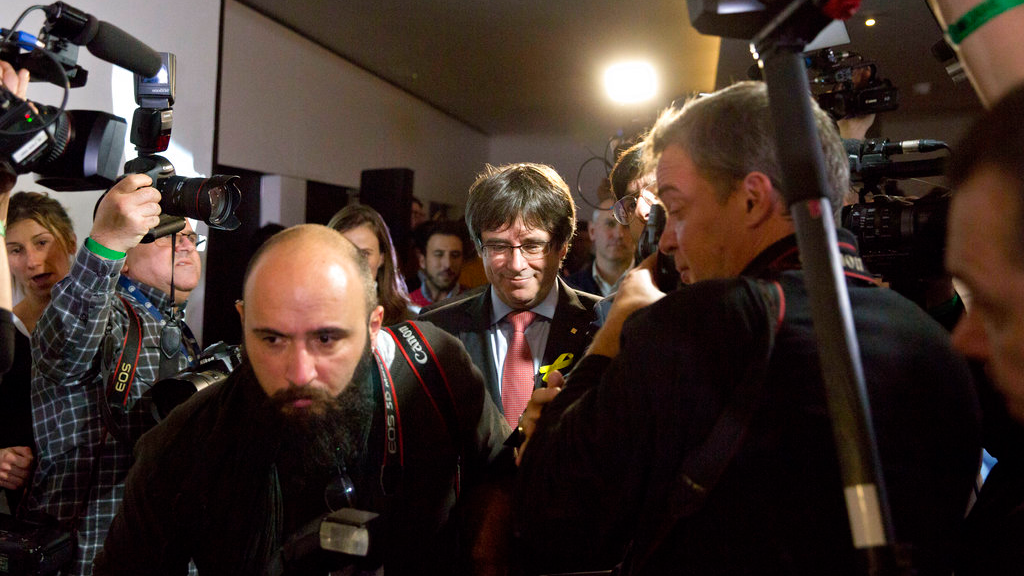 Ousted Catalan leader Carles Puigdemont, center, leaves after a press conference at the Square Meeting Center in Brussels on Thursday, Dec. 21, 2017. The pro-secession bloc won a majority in Catalan regional elections, but the anti-independence Ciutadans (Citizens), led by 36-year-old lawyer Ines Arrimadas, won the highest number of votes for a single party. Several members of the ousted Cabinet have campaigned from Brussels, where they sought refuge from Spanish justice. (AP Photo/Virginia Mayo)

Residents and politicians in and outside Catalonia are digesting election results which further exposed the sharp divisions between those for and against independence.

Though pro-Spain Ciutadans (Citizens) collected most votes in Thursday's election in the restive region, it was a bittersweet victory for the business-friendly party as separatist parties won most seats in the region's parliament.

If they work together, the pro-independence parties have the ability to forge a majority in the Catalan parliament and form the next government. However, past squabbles between them suggest it won't be easy.

Former Catalan leader Carles Puigdemont, who campaigned from Belgium where he is evading a Spanish judicial probe into his recent attempt to split Catalonia from Spain, is also scheduled to speak.

Catalan ex-president, 4 others in custody in Brussels