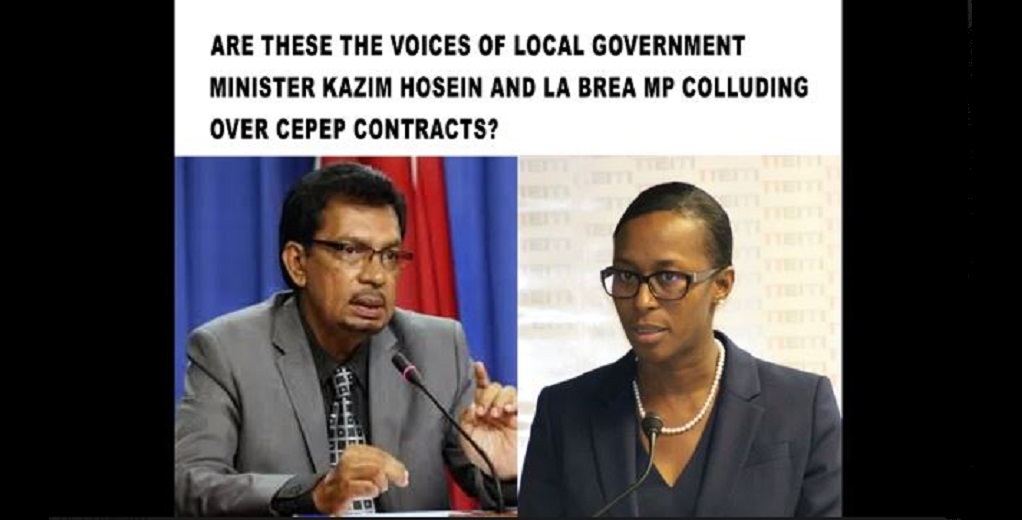 A call is being made for the Commissioner of Police to launch an immediate and urgent investigation into a recording circulating on social media, in which two people, believed to be Government officials are allegedly heard colluding over ‘CEPEP contracts.’

The 24-second recording, which appears to be a telephone conversation, begins with one of the officials asking the other about contractors in her constituency.

Male caller: “Them contractors by you, you want back any of them?”

A female voice is then heard saying she had already responded, with the other official urging her to delete any emails she may have and not send any text messages.

Male caller: “Dr Rowley tell me to talk to alyuh directly, he say don’t send no email and don’t send no text. Whatever email yuh have delete it eh.”

Former Government Minister Devant Maharaj is calling for a probe to be launched.

“I call on the Commissioner of Police to launch an immediate and urgent investigation on the contents of a recording now being circulated on social media,” he said.

Maharaj said if contents are true on the recording being circulated on social media with Government officials, it suggests a collusion and conspiracy to award contracts to individuals in circumstances where a specific request to delete email documentation is being made.

“The inference of deleting emails reasonable suggests that the persons speaking wish to conceal the method of distributing these contracts. Questions should also be asked as to why would you seek to distribute contracts in a clandestine manner? Why would there be a specific request to delete an email? It is suggestive of an unlawful conspiracy involving no less a person than Prime Minister Dr Rowley,” Maharaj questioned.

The former Government Minister is also calling upon the alleged government officials involved to confirm or deny whether these are their voices in the recording.

“I, therefore, call upon ministers involved to confirm or deny that these are their voices and to clarify the manner in which CEPEP contracts are being currently determined in general and la Brea in particular,” the former government minister said.

In a WhatsApp message, Hosein responded denying the claims.

"I have been in meetings all day and was not able to return calls until now. I’ve received the WhatsApp clip that is being circulated with my photo and that of my colleague Nicole Olivierre. It is my understanding that this clip originated from Devant Maharaj, an individual who has fallen out of favour with his colleagues and is grasping at anyway back in. I see it as an attempt to make allegations against me and draw me into a scandal. However, I speak with all members of parliament as well as opposition on many matters, including CEPEP. And I direct them to contact the board of the company. I remain dedicated to serving my country in this office and I will not let untrue narratives prevent me from fulfilling this mandate."