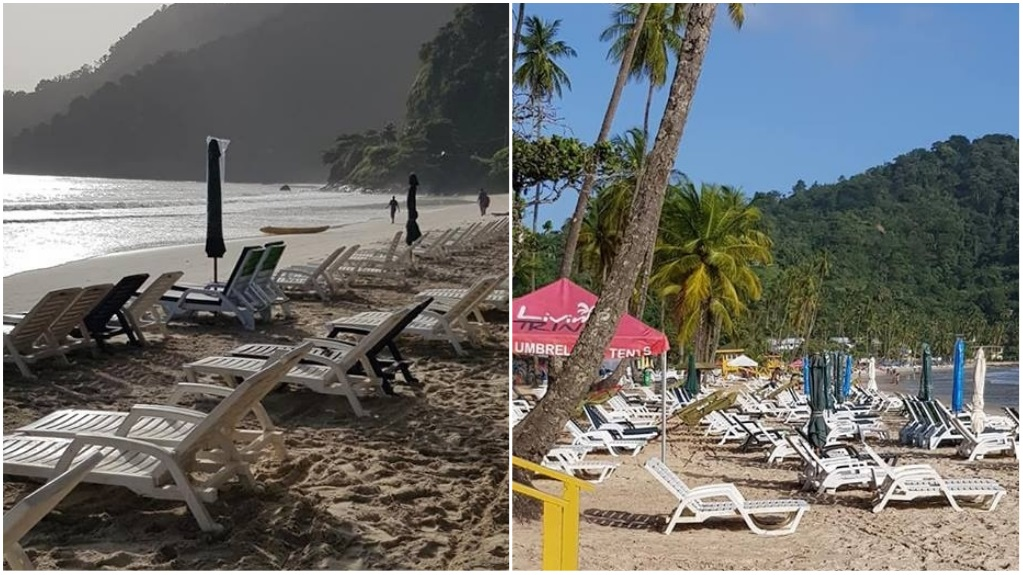 Citizens are calling for action over alleged ‘turf wars’ at Maracas Beach among chair rental companies, some of whom are allegedly extorting beachgoers for money to even park or sit on the beach.

One Facebook user posted photos to social media saying on weekends chair rental companies now put their chairs out early in the morning, preventing beachgoers from sitting on the sand and, in some cases, refusing to move the chairs.

“So have been taking early morning trips to Maracas Bay on Sunday mornings for the past few weeks now... The situation is getting worst... The companies that rent the beach chairs and umbrellas have now decided that they must cover the entire beach with their equipment and leave little or no beach front for persons not wanting to use their service.” 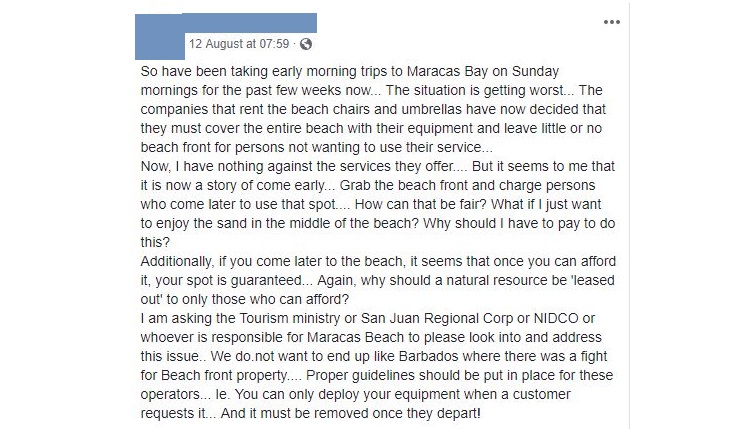 “Now, I have nothing against the services they offer.... But it seems to me that it is now a story of come early... Grab the beach front and charge persons who come later to use that spot.... How can that be fair? What if I just want to enjoy the sand in the middle of the beach? Why should I have to pay to do this?”

“Additionally, if you come later to the beach, it seems that once you can afford it, your spot is guaranteed... Again, why should a natural resource be 'leased out' to only those who can afford?”

“I am asking the Tourism ministry or San Juan Regional Corp or NIDCO or whoever is responsible for Maracas Beach to please look into and address this issue.. We do.not want to end up like Barbados where there was a fight for Beach front property.... Proper guidelines should be put in place for these operators... Ie. You can only deploy your equipment when a customer requests it... And it must be removed once they depart!”

One person who visited Tyrico Beach said she was told she had to pay for a chair in order to park there.

“Same thing happened to us at Tyrico around 7am. The guys there told us we have to rent the chairs there in order to park.”

Another said he was asked to pay for simply sitting on the sand:

“I pelt away a chair (because) I wanted to sit in that area then they come to tell me I have to pay to use the chair and the spot,” he said.

A source said to Loop News there is in fact only one chair rental company licensed to operate on Maracas Beach, but now there are up to seven different chair rental operators vying for space, to the point where beach chairs were set on fire in a bid to claim territory last year.

She said since the Tourism Development Company (TDC) was dissolved in order to create two separate tourism agencies for Trinidad and Tobago, there has not been any specific agency overseeing management of chair rentals at Maracas Beach.

“At the time, TDC authorised one rental company to operate on the beach. The problem is persons in the area decided to just take it upon themselves, I think there are a couple of them who applied but never got a reply. They ‘put the carriage before the horse’ and a lot of them just bought chairs.”

“Because only one company is branded a lot of people think the problem is with them. Letters have been written to the Ministry but they said they are still working on it. But the longer they wait, the worse the situation will get.”

"People are now getting competitive to the point where they will approach people as soon as they park in the parking lot in order to make them rent chairs."

The woman said that all the groups take part in aggressive strategies but said if any issues were raised her company strives to address it.

(Photo: Over 100 beach chairs were burned in Maracas Beach in 2017 in what was thought to be a bid to claim 'turf' on the beach.)

Tourism Minister: Steps being to taken to eliminate lawlessness

Tourism Minister Randall Mitchell said he is aware of the situation and is taking swift action to address it.

“All vendors at the Maracas Beach Facility must be recognized and approved to vend by the Ministry of Tourism subject to its rules and regulations. Interlopers will be removed from engaging in any unauthorized commercial activity at the Facility.”

“Instead, what is taking place is there are approximately 9 beach chair vendors. Only one is recognized by the Ministry of Tourism.”

“Fierce competition and the lawlessness has led to the beach chair vendors arriving early and staking “turf” as well as touting and the harassment of patrons of the beach. It has also now become a security hazard as it inhibits the life guards in their duties.”

Mitchell said there are plans for the facilities management company to retain security and to partner with the police and other elements of national security to ‘eliminate the lawlessness’.

“I agreed 100% I HATEEEEEEEEE what they are doing! They should have an allotted place and you go rent a chair whenever you reach. And the are heckling you from the time you park for chairs....all the way to the beach. I love the beach but hate what it is becoming! And they make you feel uncomfortable with their attitudes! Which is becoming hostile since there are competing companies now. This NEEDSSSSS to stop!!”

“I agree that chair renters should not be allowed to occupy the beach .wonder how this is regulated,are they taxed?”

“Demand that they move the chairs if this is where you want to sit, they should not be operating in this manner. It is a public beach so you have your rights.”

Councillor for Maracas Bay, Lyndon Lara, said he is aware of the issue and will raise the issue with the Ministry as well.