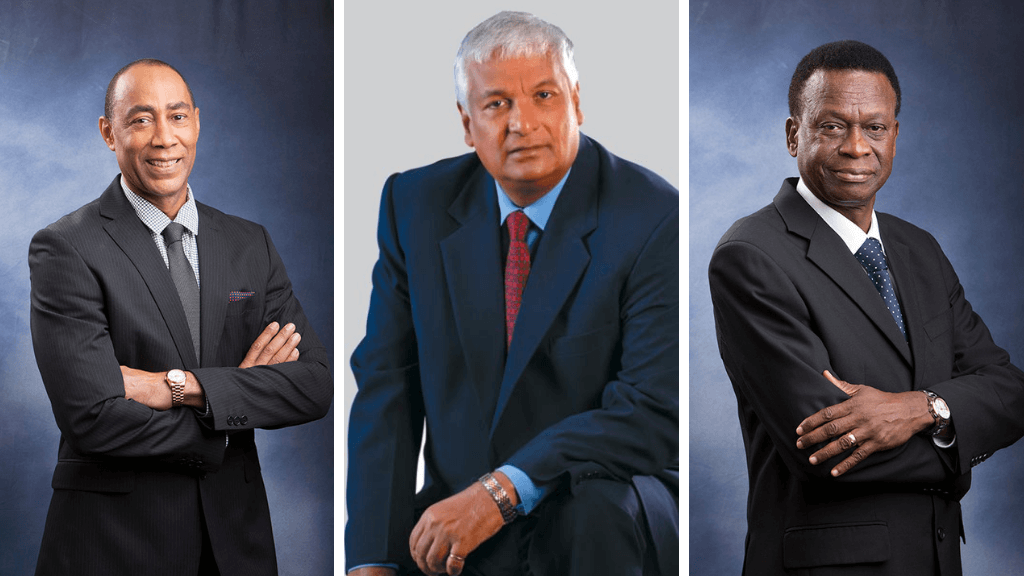 Three Trinidadians including former Petrotrin Chairman Andrew Jupiter have been appointed Professors of Practice at The University of the West Indies.

Jupiter’s role is in Petroleum Engineering.

The honorary professorship is a non-tenured position in the university system where subject matter experts—practising or retired—are selected based on their professional competence, distinguished practice, notable teaching or service contributions.

The Professor of Practice position offers the opportunity to host such experts in fixed-term teaching positions which helps make practical knowledge and real-world situations part of the students’ educational experience.

Appointees are free to use the title “Professor” for as long as they remain in active association with the University.

All three will be based at the St Augustine Campus.

The other distinguished Professors of Practice appointed across the University include:

Former Prime Minister of Barbados Owen Arthur, who will oversee Economics of Development at The UWI Cave Hill Campus.

In Vice Chancellery, as a Professor of Practice – Global Affairs, Ambassador Dr Richard Bernal, Pro Vice-Chancellor, Global Affairs and former member of the Board of Governors of the Inter-American Development Bank, Jamaica.

The honorary professorship was introduced earlier this year as part of UWI’s efforts to deepen academic-industry partnerships and to connect the University’s teaching and research to relevant issues impacting industry in the region.

More about the Professors of Practice:

Gerry Brooks is a distinguished alumnus of The UWI, St Augustine Campus. In 2014, he was among 25 renowned graduates to be recognised by the UWI Alumni Association (Trinidad and Tobago Chapter). The Attorney at Law is also a graduate of Columbia University where he obtained an MBA, Dean’s Honour Roll. Mr Brooks is described as a veritable “captain of industry” for his eminence in the local and regional business community, career and proven leadership in the private sector, in roles such as Chairman of the National Gas Company (NGC) Group of Companies, and Group Chief Operating Officer and Sector Head – Manufacturing, ANSA McAL. In addition to his extensive private sector expertise, Mr Brooks has served in several spheres of public life nationally and regionally.  Some highlights include Caribbean Court of Justice Trust Fund, Chairman, Finance and Investment Committee (2003-2014); Vice President, Law Association of Trinidad and Tobago (2012-2017); President, Family Planning Association of Trinidad and Tobago (2011-2016), and Member, Police Service Commission (1999-2001).

Winston Dookeran is the holder of Trinidad and Tobago’s highest national award, the Order of the Republic of Trinidad and Tobago (ORTT) for distinguished service in the field of Economics. He holds an undergraduate degree in Economics and Mathematics from the University of Manitoba in Canada and a graduate degree in Economics and Political Science from the London School of Economics. He is also a former Senior Economist at the United Nations Economic Commission for Latin America and the Caribbean (ECLAC) and a former Governor of the Central Bank of Trinidad and Tobago, former Minister of Foreign Affairs and former Member of Parliament.

Owen Arthur is Barbados’ fifth and longest-serving Prime Minister, holding the office from September 1994 to January 2008. The notable Economist is an alumnus of both The UWI Cave Hill and Mona campuses. He earned a Bachelor’s degree in 1971 in Economics and History at Cave Hill, and his Master’s degree in Economics in 1974 at Mona. He began working in Jamaica in 1973, first as a Research Assistant at the University and later as an Assistant Economic Planner with the Government of Jamaica’s National Planning Agency. In 1981 he returned to Barbados, and worked for the Barbadian Ministry of Finance and Planning from 1981 to 1983, then 1985 to 1986 and also served as a Research Fellow at The UWI’s Institute of Social and Economics Research (now The Sir Arthur Lewis Institute of Social and Economic Studies (SALISES) from 1983 to 1985. His political career began with his appointment to the Barbadian Senate in 1983. In 1993 he was appointed as the parliamentary Opposition Leader as head of the Barbados Labour Party and, upon the party’s decisive victory in the September 1994 elections, he became Prime Minister.

Dr Paul Bacsich is a consultant in online learning (e-learning, including distance learning) with over 30 years’ experience and has personally benchmarked e-learning at over 20 universities in four countries. Dr Bacsich holds an MA in Mathematics from the University of Cambridge and a PhD in Mathematical Logic from the University of Bristol. He has considerable experience in market research, competitor research, due diligence and acquisition prospecting with a focus on the online learning marketspace, working with large universities commercial organisations and venture funds. He is currently the Director of Matic Media Limited and Senior Associate with Sero Consulting Limited—both in the UK. He worked at the Open University in the UK for several years in a variety of roles ending as Assistant Director of the Knowledge and Media Institute. Since 1996 he has been a Professor of Telematics, Director and Consultant.

Ambassador Dr Richard Bernal is an economist with over 40 years’ experience. He was educated at the University of Pennsylvania and Johns Hopkins University in the US. His formal qualifications include a BSc, MA, and PhD in Economics and an MIPP in International Public Policy. He is a former Counsellor for Jamaica on the Board of Directors of the Inter-American Development Bank (IDB) and also served as Executive Director from 2010-2012 and Alternate Executive Director from 2008-2010. Prior to the IDB, he was the Director-General of the Caribbean Regional Negotiating Machinery (RNM) for eight years with responsibility for trade negotiations for the Caribbean Community (CARICOM), Cuba and the Dominican Republic. Ambassador Bernal also taught economics and development economics at The UWI for seven years and was Jamaica’s Ambassador to the US and Permanent Representative to the Organisation of American States (OAS) for 10 and a half years.

Dr Dexter James, Chief Executive Officer, Queen Elizabeth Hospital, Barbados is an alumnus of The UWI St Augustine Campus and holds an MBA from Walden University in the US as well as a PhD from Bangor University in the UK. In addition to these qualifications, he is a Chartered Professional Accountant and Chartered Management Accountant. His career began in accounting and financial management before moving to strategic leadership, then to senior management positions at the Ministry of Health and Human Services in the Cayman Islands, Health Authority of Anguilla, St George’s General Hospital in Grenada and the Trinidad and Tobago Regional Health Authority. Dr James is credited with strengthening the accounting and financial management systems at these institutions, and is noted as one of the few Caribbean experts in Health Care Administration.