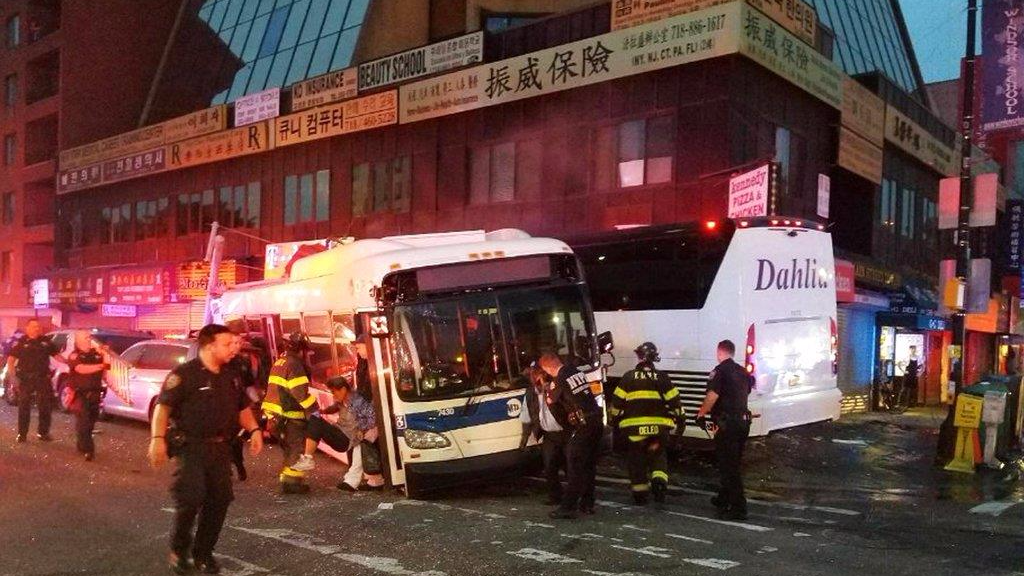 In this photo provided by the NYPD's 109th Precinct, officers respond to a collision involving two buses on Main Street in the Queens borough of New York, Monday, Sept. 18, 2017. The Fire Department of New York said several been hurt, some of them severely, when a city bus and a tour bus collided in the Flushing neighborhood. (NYPD's 109th Precinct via AP)

A charter bus barreled through an intersection, slammed into a city bus and then plowed onto a sidewalk and into a building Monday, killing three people.

Mayor Bill de Blasio said he was shocked by the "sheer destruction" and noted that one of the people killed was a pedestrian simply walking down the sidewalk when the collision happened "out of nowhere."

The other dead were the tour bus driver and a passenger on the city bus. Sixteen other people were hurt, some of them seriously, in the crash at 6:15 a.m. in the Flushing neighborhood of Queens, city officials said at a briefing.

A building that houses a number of retail stores, including a fried chicken restaurant, received substantial impact from the crash, and experts were working to make sure it was secure, de Blasio said.

Security camera footage posted by WABC captured the tour bus smashing into the city bus as it turns right. As the city bus spins out of control, the charter bus plows onto a sidewalk and into the side of the restaurant.

The charter bus's brake lights don't go on until the bus stops moving.

Although the investigation has just begun, the evidence indicates there was "an enormous amount of speed," Lhota said.

"We want to make sure we understand what happened and prevent this from ever happening again," Lhota said.

Signage on the tour bus showed it was from the Dahlia Group, Inc., based in Flushing. A person answering the phone there declined to comment; there was no immediate response to an emailed request seeking comment.

Federal Motor Carrier Safety Administration records show that a Dahlia bus was also involved in a fatal crash in Connecticut in February 2016.

One of the company's buses was driving through a snowstorm to reach the Mohegan Sun casino when it overturned on Interstate 95 in Madison, east of New Haven. One person died, and 36 people were injured.

The company's drivers have been cited several times over the past 12 months for safety violations, including failing to obey a traffic control device, speeding and unlawful parking in the roadway.

Plane with New York CEO, 3 others, missing in Bahamas