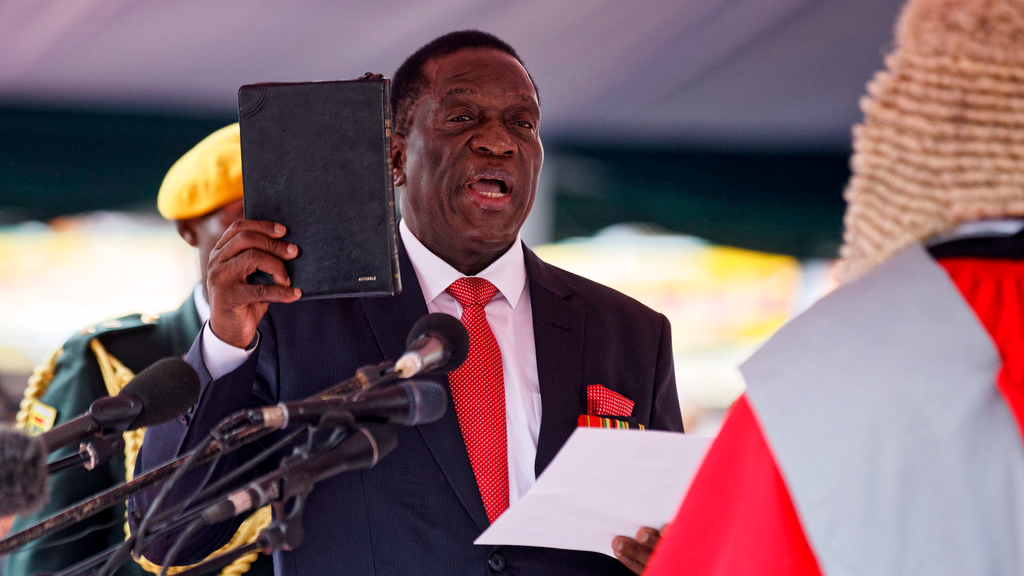 Exuberant Zimbabweans greeted the swearing-in Friday of new President Emmerson Mnangagwa, who takes power after an extraordinary series of events that ousted the world's oldest head of state.

Mnangagwa, fired earlier this month as vice president, will lead after the resignation of 93-year-old Robert Mugabe, who succumbed to pressure to quit from the military, the ruling party and massive demonstrations amid fears his unpopular wife would succeed him.

A smiling Mnangagwa greeted a stadium crowd of tens of thousands with a raised fist, and he promised to devote himself to the well-being of the people. The military, fresh from putting Mugabe under house arrest just days ago, quickly swore its loyalty to the new leader.

Mnangagwa, a former justice and defense minister, was a key Mugabe confidant for decades until they fell out because of the presidential ambitions of Mugabe's wife, Grace. Despite his long association with the government that has presided over Zimbabwe's decline, including economic collapse and human rights abuses, Mnangagwa has promised democracy and reached out to other countries for help.

Mugabe, one of Africa's last remaining liberation leaders, quit Tuesday amid impeachment proceedings. In the end, he was isolated and showing few of the political skills that kept him in power for 37 years and made him a prominent but polarizing figure on the world stage. He had led since Zimbabwe's independence from white minority rule in 1980.

Mugabe did not attend Friday's swearing-in, and ruling party officials have said he will remain in Zimbabwe with their promise that he is "safe" and his legacy as a "hero" will stand after his fight for an independent Zimbabwe.

Zimbabwe's state-run Herald newspaper reported that Mnangagwa assured Mugabe and his family of their "maximum security." The report said the two men agreed Mugabe would not attend Friday because he "needed time to rest."

Some people ahead of the inauguration began to dance in the stadium stands. Banners erected in read "Dawn of a new era" and "No to retribution," even as human rights activists began to report worrying details of attacks on close allies of the former first lady and their families. Mnangagwa has warned against "vengeful retribution."

Tendai Lesayo held a small Zimbabwean flag as she sold drinks from a cooler outside the stadium. She said she would welcome a fresh start, saying "life now is impossible."

Elsewhere in the capital, long lines formed outside banks, a common sight in a nation struggling with cash shortages and other severe economic problems that the new president will have to confront.

"Right now, nothing has really changed for me. I still cannot get my money from the bank," said Amon Mutora, who had been in line since 6 am.

"Attending the inauguration will not bring food for my family," said Kelvin Fungai, a 19-year-old selling bananas from a cart. Many young people are well-educated but jobless, reduced to street vending to survive. Others have left the country.

Elsewhere, there were signs of hope amid the uncertainty. Black market rates for cash have tumbled since Mugabe left office. Before he stepped down, one had to deposit $170 into a black market dealer's bank account to get $100 cash. On Friday, $100 cash was selling for between $140 and $150.

As the inauguration crowds streamed by, Sharon Samuriwo sat on a ledge, watching. She said she hoped Mnangagwa would learn from the errors of his predecessor, and she acknowledged that the path ahead for Zimbabwe is unknown.

Still, "after 37 years, we've got someone different."