Chelsea v Arsenal: Wenger against Conte and the other heavyweights 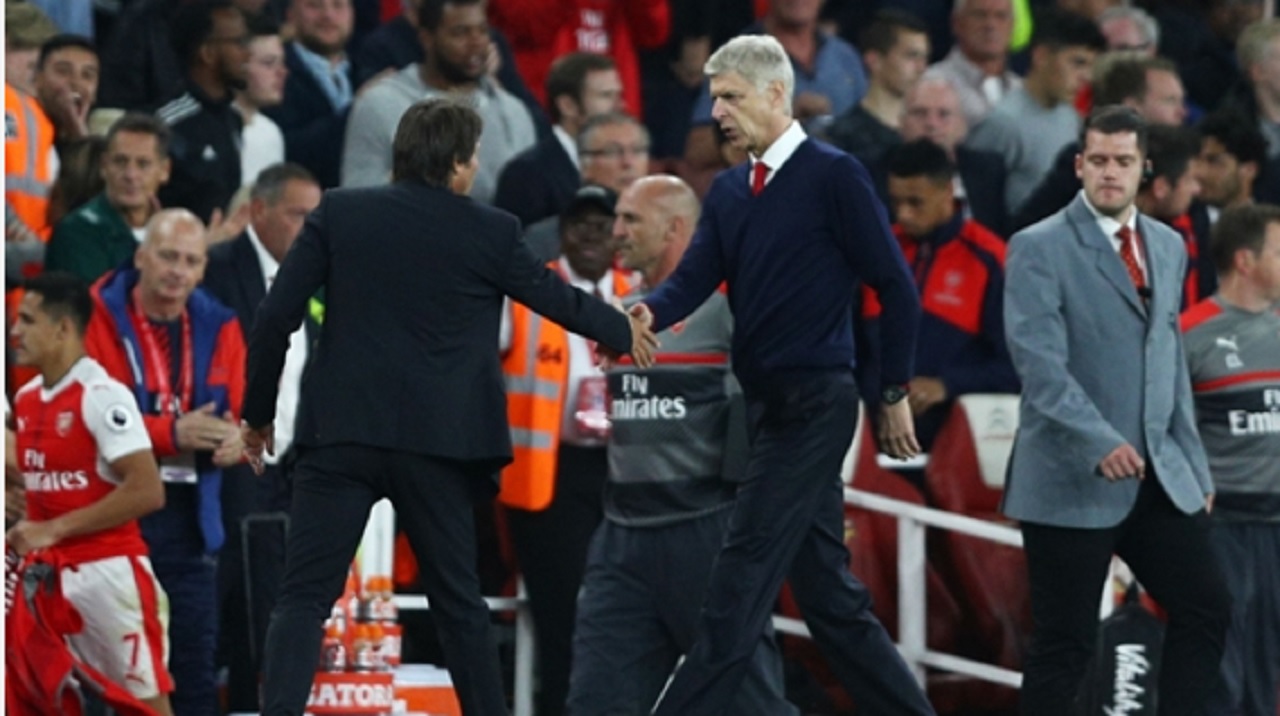 Arsene Wenger's record against fellow managerial big-hitters has come in for sustained criticism over recent seasons but he has enjoyed the better of meetings with Antonio Conte since the ex-Italy boss arrived at Chelsea.

Conte implemented the tactical tweaks that saw the Blues romp to the Premier League title on the back of a chastening 3-0 loss at Emirates Stadium last season.

Chelsea won the return game convincingly but were beaten by Arsenal in the FA Cup final and lost August's Community Shield to the Gunners on penalties.

It leaves Wenger with a creditable won two, drawn one, lost one return against one of the newer breed of coaches who supposedly leave him as a man out of time.

But, with Arsenal's record against their fellow title aspirants under the microscope following the 4-0 hammering at Liverpool, how does Wenger measure up to the other men who would be king?

Arsenal had the misfortune of facing Guardiola's formidable Barcelona and Bayern Munich sides over consecutive seasons in the Champions League, where success was both fleeting and emphatically answered. A 2-1 win at Emirates Stadium was answered by a 3-1 loss at Camp Nou in the last 16 in 2011, Barca having dismissed the Gunners in the quarter-finals a year earlier.

Bayern lost a group game 2-0 in north London in 2015 but Arsenal suffered a 5-1 rebuttal in Bavaria.

Since Guardiola's move to Manchester City last season, the rivalry has evened out. Wenger only took a point off the Catalan in the Premier League but Arsenal came from behind to beat City 2-1 in the FA Cup semi-finals.

Winning three out of six Champions League encounters with Klopp's formidable Borussia Dortmund stands alongside anything Wenger has accomplished in Europe's premier competition in recent years, although BVB topped the group in 2013 and 2014 to set up the Gunners' customary last-16 exit.

In the Premier League, Klopp is on a run of three consecutive wins after last month's Anfield annihilation. Liverpool have scored 14 goals across four matches against Wenger's Arsenal under their enigmatic German boss.

Wenger's nemesis and bete noire all rolled into one. Mourinho boasts a formidable record against the Frenchman and often revels in lauding it over an opponent he generally views with thinly veiled contempt.

Across two spells at Chelsea, Mourinho never tasted Premier League defeat to Arsenal, with Wenger's 2015 Community Shield victory his first over the Portuguese at the 14th time of asking. As Manchester United rested players with an eye on the Europa League crown they would eventually claim, he finally scalped Mourinho in the top flight in May this year.

"Arsenal fans are happy and I'm happy for them. It's the first time I leave and they're happy," an ever-mischievous Mourinho remarked afterwards. "I leave Highbury they were crying. I leave the Emirates, they were crying, walking the streets with heads low."

Arsenal's dominance of Tottenham is a hallmark of Wenger's near 21 years at the helm, or at least it was until Pochettino arrived at White Hart Lane.

Wenger's sole Premier League triumph over the Argentinian came when the latter was in charge of Southampton in 2013 and Arsenal have drawn three and lost one since Mathieu Flamini's brace sealed a 2-1 EFL Cup win at Spurs in September 2015.

Despite departing the stage four years ago, it is the Ferguson rivalry that is set to define Wenger's time at Arsenal rather than any of his scrapes with those younger men.

During its early years it was a thrilling, gripping drama. Marc Overmars' winner at Old Trafford in 1998 set Arsenal on course to snatch the title from Manchester United and was the second in a run of four straight wins.

Ferguson's United responded with three consecutive Premier League crowns, their 2000-01 campaign featuring a 6-1 demolition of the Gunners at Old Trafford. Yet, Wenger's men returned to the same ground in May 2002 to claim a title-clinching win when Sylvain Wiltord scored the only goal. Seven months on and with no little sense of inevitability, it was United who halted Arsenal's unbeaten top-flight run at 49 matches.

The rivalry became far more one-sided towards the end of Ferguson's record-breaking tenure. Arsenal won only two of the final 15 meetings between these era-defining managers, a wretched run that featured a comprehensive Champions League semi-final loss in 2009 and a humiliating 8-2 shellacking in 2011.