Chicago police: Man killed by police appeared to be armed 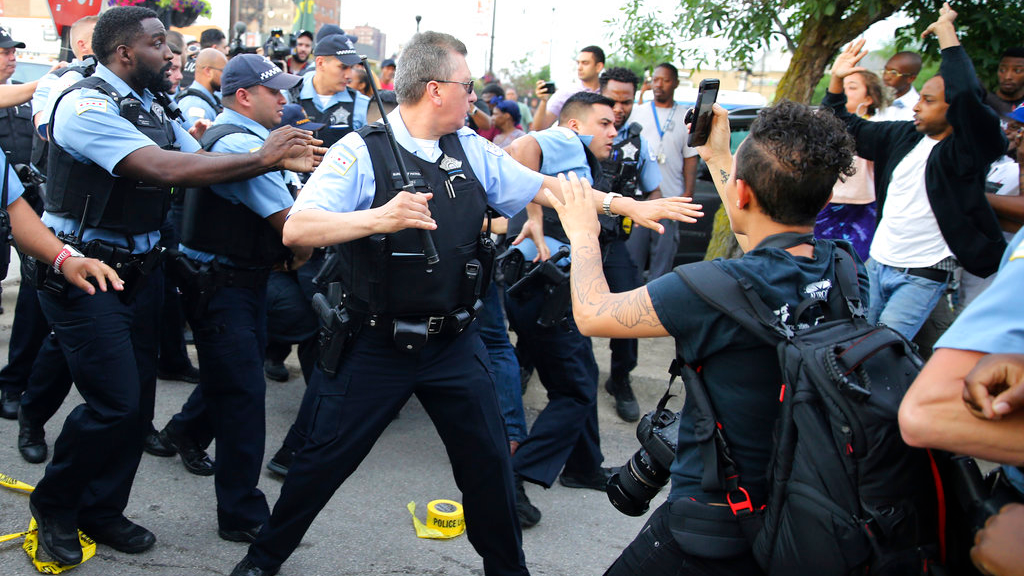 Members of the Chicago police department scuffle with an angry crowd at the scene of a police involved shooting in Chicago, on Saturday, July 14, 2018. (Nuccio DiNuzzo/Chicago Tribune via AP)

Footage from body-worn cameras and surveillance cameras shows that a man who was shot and killed by a Chicago police officer was armed with what appeared to be a handgun, authorities said Sunday.

Police described the video and said they would release footage of Saturday's shooting from officer-worn body cameras later Sunday. Police have made some video public before in an effort to diffuse mounting public tension, and the new release comes hours after a skirmish between angry residents and baton-wielding officers.

Four protesters were arrested in the clash, and some police officers suffered minor injuries from thrown rocks and bottles, some of which were filled with urine. Officers pulled people to the ground and struck them with batons. Two squad cars also were damaged.

Medical examiners identified Harith Augustus, 37, of Chicago, as the victim of the shooting on the city's South Side. He wasn't a known gang member and had no recent arrest history, police spokesman Anthony Guglielmi said.

A resident of the area, Gloria Rainge, told the Chicago Sun-Times that Augustus, known in the Grand Crossing neighborhood as "Snoop," worked at a barbershop and had a 5-year-old daughter.

Police found a handgun and two magazines of bullets at the shooting site and sent them for testing, Guglielmi said.

Officers patrolling on foot tried to question the man over a "bulge around his waistband" that suggested he was armed, patrol chief Fred Waller told reporters. The man, who lived a short distance away, broke free and ran from the officers, who believed "he appeared to be reaching for a weapon" and shot him, Waller said.

The Civilian Office of Police Accountability, which investigates officer-involved shootings, said it was analyzing the video and asking anyone who may have captured cellphone footage to share it with the agency.

It was at least the third time in the last two weeks that a Chicago police officer shot someone.

Chicago has a troubled history of police shootings. The city erupted in protest in 2015 after the release of a video showing a white police officer shoot a black 17-year-old, Laquan McDonald, 16 times a year earlier.

The officer, Jason Van Dyke, was charged with murder. McDonald's death led to the ouster of the police chief and a series of reforms meant to prevent future police abuses and to hold officers accountable.