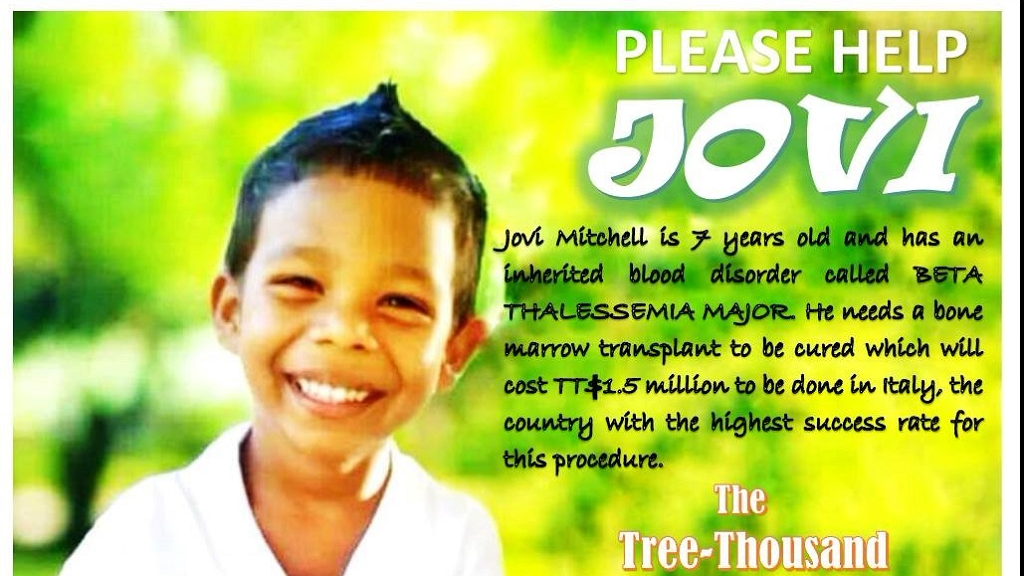 Seven-year-old Jovi Mitchell, who suffers from a blood disorder called Beta Thalassemia Major, was rejected for funding from the Children's Life Fund and now needs $1.5 million for emergency surgery.

Beta Thalassemia is a blood disorder that reduces the production of haemoglobin.

According to the US National Library of Medicine, haemoglobin is the iron-containing protein in red blood cells that carries oxygen to cells throughout the body.

In people with beta thalassemia, low levels of haemoglobin lead to a lack of oxygen in many parts of the body; affected individuals also have a shortage of red blood cells (anaemia), which can cause pale skin, weakness, fatigue, and more serious complications.

People with beta thalassemia are at an increased risk of developing abnormal blood clots.

Jovi was diagnosed at the very tender age of three months and currently must receive blood transfusions once every two weeks.

He is also on mandatory daily medicine.

Jovi attends the Tortuga Government Primary School and is in Standard one, but he misses classes a lot due to his condition.

His mother, Anita Mitchell is pleading for financial help as Jovi needs a bone marrow transplant; however, his application was rejected by the Children’s Life Fund in March.

He has been accepted by a hospital in Italy and the family needs to raise $1.5 million.

“Our application was declined, they said they don’t consider Thalassemia life-threatening. He was accepted at Bambino Gesu Hospital in Rome Italy. It’s a 9 months’ procedure.”

The mother said it’s the worst pain a parent can experience.

To see your baby, go through so much pain so often and there isn’t anything we could do to ease the pain. The older he gets the higher the risks of developing future complications. The success rate is much better under the age of 10 and he’s seven. He was reviewed after the request of a lot of tests and he is presently in good health to have the transplant done.”

The family believes in giving back and plans to so once people donate to the cause.

For every $1000 donated to the cause, they will supply and plant a tree.

In a similar case, five-year-old Haleema Mohammed, who suffers from the same condition, was also denied funding from the Fund.