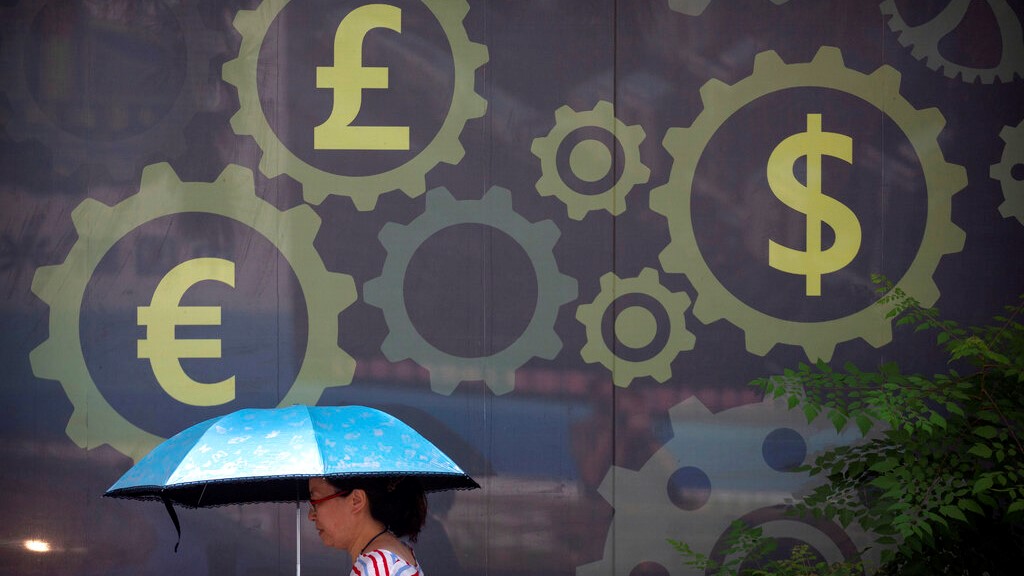 In this July 20, 2018, photo, a woman carries an umbrella as she walks past a mural displaying world currency symbols outside of a bank in Beijing. (AP Photo/Mark Schiefelbein)

China lowered the trading range for its currency for a fourth day on Thursday, showing its potential for use as a trade weapon against Washington, but the exchange rate steadied following declines that alarmed financial markets.

The central bank set the starting point for the yuan's daily trading at 7.0039 to the U.S. dollar. It was the first time since 2008 that it was set below the politically sensitive level of seven to the dollar.

The yuan was trading at 7.0435 in mid-afternoon, but that was stronger than the previous day.

Beijing alarmed investors Monday by allowing the yuan to fall to an 11-year low against the dollar. That followed President Donald Trump's threat of tariff hikes on an additional $300 billion of Chinese imports in a fight over trade and technology.

This week's declines are a "warning shot to the Trump administration," showing Beijing can weaken the yuan in response to trade pressure, Nariman Beravesh of IHS Markit said in a report.

If this marks the start of a new phase in their trade war, "the ensuing financial firestorm could push the U.S. and global economies into recession," Beravesh said.

The yuan's changes this week are small compared with fluctuations of the euro and other major currencies. But Washington complains an unfairly weak currency makes China's export prices too low and swells its trade surplus. That makes any decline politically volatile.

The People's Bank of China sets the yuan's exchange rate each morning and allows it to rise or fall 2% during the day. It can intervene and buy or sell currency — or order Chinese commercial banks to do so — to guide the exchange rate.

A weaker yuan would help to offset U.S. tariff hikes. But the currency has only declined by about 5% against the dollar this year, which cannot fully compensate for Trump's tariff hikes of up to 25%.

Trump's threat last week came after trade talks concluded in Shanghai with no sign of a deal. Negotiators are due to meet again in September in Washington.

Economists say if the September 1 tariff hike goes ahead, the dent in Chinese economic growth could weaken the yuan to as low as 7.2 to the dollar.

Trump's tariff hikes on Chinese products have added to downward pressure on the yuan by prompting concern about a slowdown in the world's second-biggest economy.

A weaker yuan might lead to an outflow of capital from China, raising borrowing costs at a time when Beijing is trying to shore up cooling economic growth.

China's yuan falls below sensitive level of 7 to US dollar