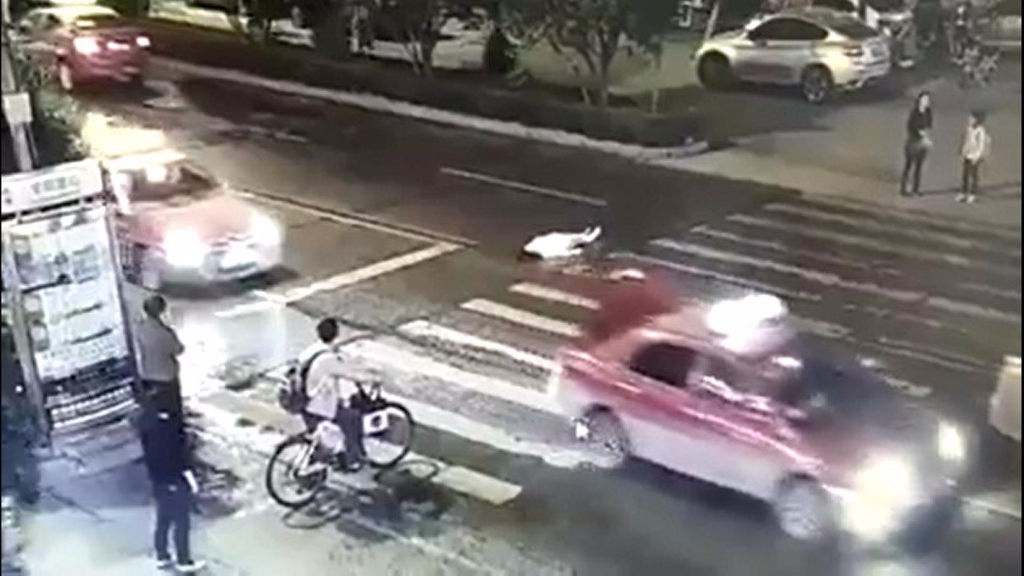 A speeding taxi knocks the pedestrian off her feet, sending her hurtling through the air. Dozens of people stand gawking or walk past, as if the young woman sprawled in the busy intersection simply doesn't exist.

A full minute passes, and another speeding vehicle, this time an SUV, tramples the prone woman. Her unconscious body churns under its large wheels like a lumpen sack.

After a grainy video of a traffic accident in the city of Zhumadian surfaced on Chinese social media this past week, the initial reaction was one of outrage directed at the more than 40 pedestrians and drivers who passed within meters of the woman, all failing to offer help.

But for many Chinese, the video was something more: a 94-second reminder of their society's deep rot.

Even as China presents itself outwardly as a prosperous rising power, around kitchen tables and in private WeChat groups, Chinese citizens routinely grumble about a nation that's gone bankrupt when it comes to two qualities: "suzhi," or "personal character," and "dixian," literally "bottom line" — or a basic, inviolable sense of right and wrong.

Many Chinese say they avoid helping people on the street because of widespread stories about extortionists who seek help from passers-by and then feign injuries and demand compensation — perhaps explaining the Zhumadian behavior.

"It's a problem with the entire country: Our moral bottom line has fallen so low," Tian You, a novelist based in the southeastern city of Shenzhen, said by phone. "If I'm truly honest, I wonder, would I myself have dared to help the woman?"

After the Zhumadian video surfaced this week, garnering more than 5 million views in its first 24 hours before being censored, local police were forced to disclose that the incident took place weeks earlier, on April 21.

The woman, surnamed Ma, died, while the two drivers who hit her were held under investigation, police said, without giving further details.

The news swept through social media and even state media outlets. The Communist Youth League, an influential party organisation, circulated the video on its Weibo account, urging its 5 million followers to "reject indifference." An opinion column on china.com, a state media organ, asked citizens to "reflect" on the tragedy. Others used the episode as a starting point to vent about social ills.

"Like the polluted haze facing our country, we see boundless corruption, left-behind children, medical disputes and so forth," a columnist in the Chengdu Economic Daily wrote. "Have our society's morals gotten better or worse in the last 10 years? What about our future, are you confident about that? Don't ask me, because I'm not."

Public concern about China's morals crosses decades and age groups. Ever since China began its free-market reforms in the 1980s, older citizens have frequently griped about moral decay and profess nostalgia about a more innocent socialist era, while younger, worldly Chinese wonder why fraud and fake products aren't as rampant in other countries.

Chinese scholars say many issues that leave the middle class disillusioned are a result of lagging government regulation and the dislocating forces of swift development.

"In the West, law, faith and morality are a three-legged stool," said Ma Ai, a sociologist at the China University of Political Science and Law. "Our legal system is catching up, but we don't have religion and a new moral system has not established after China transformed away from a traditional, collectivist society."

A debate flared following a similar case in 2011, when an unattended 2-year old was hit by a truck on a busy street in Guangdong province and laid in a pool of blood without any help from bystanders for seven minutes. She died later. In the following years, several cities, including Beijing and Shanghai, enacted Good Samaritan laws.

To be sure, examples of bystander apathy are ubiquitous, from the case of Kitty Genovese, the woman stabbed to death in daylight in a New York City apartment complex in 1964, to last year in Chicago, where a man who was knocked unconscious in an assault was run over and killed by a taxi after a group of bystanders walked away from him.

In India, a video showed a man unsuccessfully pleading for help following a road accident that killed his wife and child in 2013.

That same year, passers-by refused to stop to help a naked, bleeding gang-rape victim after she was dumped from a bus onto a New Delhi street. The 23-year-old student died of her injuries.

But the Chinese have been particularly self-critical on the matter.

In 2009, the People's Daily, the Communist Party's official mouthpiece, ran a provocative story with a picture of a dog standing by another injured dog in a busy street and pondered whether humans would do the same. The report was headlined, "Do Chinese people lack compassion?"

A 2014 state media poll found that Chinese thought "lacking faith and ethics" was the No. 1 social problem, followed by "being a bystander or being selfish."

Many in China's intelligentsia reject the idea that an ancient strain of Chinese culture that focuses on the immediate family explains modern tragedies like Zhumadian. Confucius, after all, taught the Golden Rule. And Mencius, another revered philosopher, urged his disciples to love others' children and respect others' parents as one would their own.

More frequently heard are indictments of the Communist regime that has suppressed religion and traditional values and emphasised stability over justice.

Tian, the Shenzhen writer, cited the Cultural Revolution unleashed by Mao Zedong in the 1960s, which turned families and neighbours against each other in a battle for survival. Hyper-capitalistic, no-holds-barred competition consumed the reform era that followed Mao's death.

"Our political system doesn't regulate the things it should and it manages things it shouldn't," said Zhang Wen, a well-known Beijing commentator who pointed out that many charitable organisations have disbanded due to government pressure, resulting in a decline of "charity spirit."

In his own middle-class circle, Zhang said, many friends speak about feeling "emotionally withdrawn" in the pressure-cooker economy.

"We've become individuals, alienated and doing whatever we can to get ahead," he said. "There is no space left to care for others."