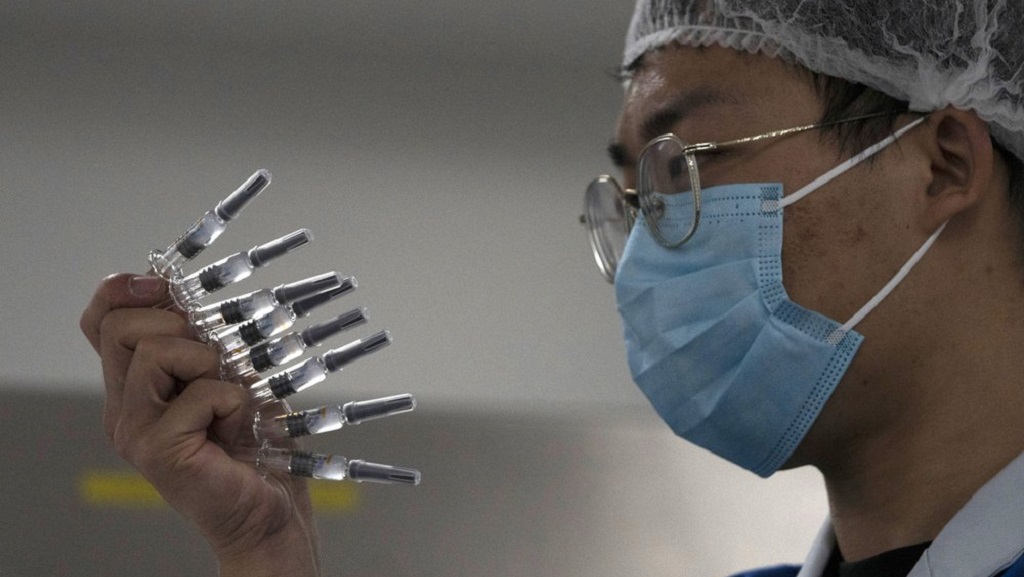 China is rapidly increasing the number of people receiving its experimental coronavirus vaccines, with a city offering one to the general public and a biotech company providing another free to students going abroad.

The city of Jiaxing, south of Shanghai, is offering a vaccine under development by Sinovac, it said in an announcement Thursday. It said high-risk groups, including people who are "responsible for the basic operations of the city" will receive priority, but that residents who have emergency needs can also sign up.

The vaccine is in the final stage of clinical testing, but has not yet been approved. The city government said it is being provided under an emergency authorization.

More than 168,000 people signed up to receive the vaccine via an online survey and more than 91,000 are being considered, CNBG said on its website. That page had been removed by Tuesday.

Chinese drug companies have five vaccines in final stages of testing but none is approved for public use. They are part of a global race to develop a vaccine that, if successful, offers the fledgling Chinese industry the potential for prestige and worldwide sales.

Top Chinese health officials have promised a vaccine for the general public before the end of this year.

CNBG's vaccine has already been given to medical workers and employees of Chinese companies being sent abroad under an emergency authorization for people in high-risk categories. It has given the vaccine to 350,000 people outside its clinical trials, a company executive said in September. The trials have about 40,000 people enrolled.

"Currently, it seems Chinese students going abroad have a strong desire to take the vaccine," a CNBG employee was quoted as saying by a state-owned newspaper, the Paper, based on the survey results in September.

Students in China who are due to start their semesters abroad say they want the vaccine because they are worried about getting sick.

"It's very dangerous over there, the town we study in, it's a red danger zone," said a student who goes to school in Poland and gave only her surname, Ouyang. She signed up for the CNBG vaccine in September but hasn't heard back yet. "We all really want this vaccine."

A student who is due to go to Britain said she signed up via the online link after classmates said they received the vaccine.

The student, who would give only her English name, Sally, said she started to hear in September that the vaccine was available to people such as her. She said other students said she might need to travel to Beijing, the national capital, or Wuhan, where the outbreak emerged in December, to receive the vaccine.

If the vaccine works, it might help protect students going to Europe or the United States, where the pandemic is still raging, medical experts said. But they said developers need to make clear it is unproven and keep track of what happens to people who receive it.

If the vaccine doesn't work, then "this is giving people a false sense of security," said Sridhar Venkatapuram, a specialist in bioethics at King's College London's Global Health Institute.

The ruling Communist Party declared the coronavirus under control in March but has warned that the risk of a new outbreak is high. Travelers and visitors to public buildings still are checked for signs of infection. Those arriving from abroad are required to be quarantined for two weeks. The country has reported 4,634 deaths and 85,622 confirmed cases.

This week, 10 million people were tested in the eastern port of Qingdao after 12 cases were found last weekend, the government said Friday. That ended a nearly two-month period with no local virus transmissions reported within China.

It was unclear whether Chinese students were being offered the CNBG vaccine under the same emergency authorization that residents of Jiaxing were.

The final stage of clinical trials, conducted on larger groups, is used to find any rare side effects and study the effectiveness of a treatment. The first and second stage trials are meant to determine whether a vaccine or treatment is safe.

"The manufacturer has an obligation to obtain follow-up information" from people who receive a vaccine under emergency use, K. Arnold Chan, a National Taiwan University expert on drug regulation, said in an email.

Failing to do that "is irresponsible and not compliant with international standards," he wrote.

More than 600,000 Chinese students studied abroad before the pandemic, according to Ministry of Education figures. They make up a large share of the foreign student body in the United States, Britain, Australia and some other countries.

Western universities are "not protecting their students," Venkatapuram said. "The company is basically offering its citizens protection going outside of China, which in essence is what any country would ideally be doing."