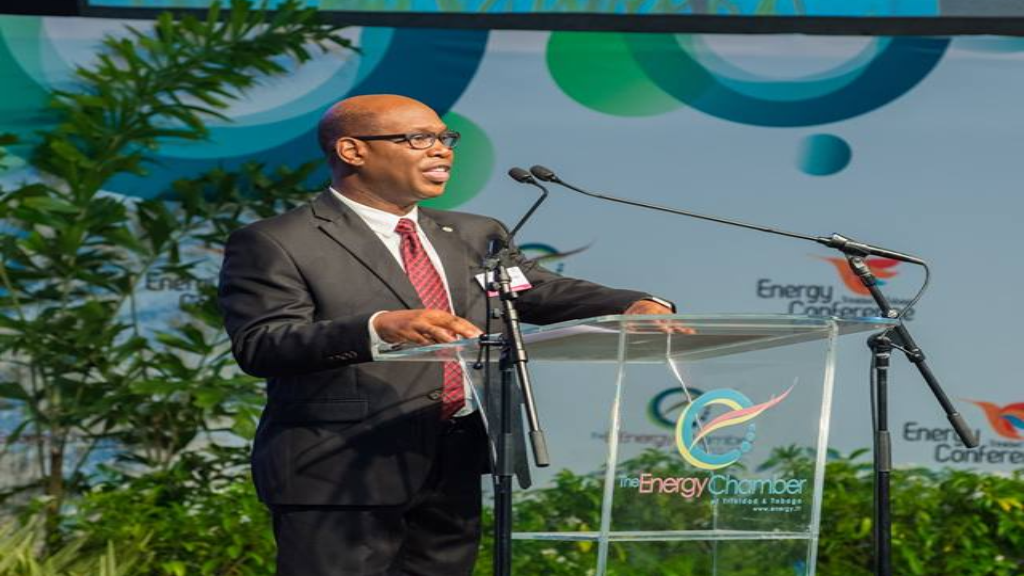 bpTT Regional President Norman Christie delivers the Sponsor's Remarks at the Opening Ceremony of the Trinidad and Tobago Energy Conference 2018 on Monday.

While he remains optimistic about recovery in the energy sector, Regional President of bpTT Norman Christie believes further collaboration is needed to take the industry forward.

Speaking on this year’s theme “Maximising Value Through Collaboration”, Christie said successes in 2017 were as a result of promises made and kept, which were all made possible through collaboration.

He noted previous calls for greater clarity indicated a need in government policy to pave the way for new developments in the upstream sector, with a promise made that bpTT would collaborate with stakeholders to form policy that would shore up the future of the local energy sector.

Collaboration with stakeholders ensured that that on some key aspects of policy, the required clarity was delivered by the government in 2017.

“This clarity along with the renegotiation of our NGC contract paves the way for future production from fields such as Angelin and the new exploration discoveries,” Christie said.

Noting that the company delivered on its promise to increase production and investment in Trinidad and Tobago, the bpTT Regional President said local content paid a significant role in all of its activities.

“Our capital expenditures exceeded US$1 billion last year. In fact, 2017 marked an important milestone because we completed the spend of US$6 billion in investments that we promised 5 years ago.”

“The TROC project provides a classic example of just how challenging industry collaboration can be…Approximately 20 different entities were involved in pulling this project together, and approximately 20 commercial agreements had to be negotiated and numerous local and foreign contractors engaged.

The negotiations process that paved the way for the sanction of Angelin provides another good example.  The process involved the NGC, the Ministries of Energy and Finance, the Natural Gas Task Force led by Mr. Wendell Mottley and the office of the Prime Minister.”

Crediting collaboration as the driving force behind the establishment of the T&T Upstream Operators Group in 2017, Christie said the collaborative effort is already reaping benefits such as the pursuit of a common Persons on Board or POB aviation system for all offshore operators.

Despite trying times and tested relationships as a result of collaborations, he said the country is reaping benefits.

He issued a call for greater collaboration, in spite of the challenges faced.

“What this means though, is that we need more collaboration not less.  There are unfortunately still voices in and around the industry that see our challenges as an opportunity for division.  They sadly miss the point that so much more value can be generated when we work together.

Collaboration is not a feel-good concept that makes you want to sing “One Love One Heart, let’s get together and feel alright.”  Collaboration is practically potent and a source of competitive advantage,” he said.

At the same time, acknowledging the company’s low points, Christie said occurred with the loss of Angelin fabrication in Trinidad because of inadequate collaboration.

However, he said it must be taken as a learning experience.

“There are other platforms to be built but creating a competitive, successful fabrication industry will require all stakeholders to work together, energy companies, Government, fabricator, service companies, unions and the community. And, it will require other operators and not just BPTT contracting for fabrication in-country.

BPTT’s next platform, Cassia C, is still in the planning stage. We are currently reviewing all options, including local fabrication. However, any decision to build locally will depend on how competitive the local fabrication industry becomes.”

The bpTT Regional President concluded by urging continued focus and commitment through collaboration.

Couple gets hookworm after sitting on Caribbean beach