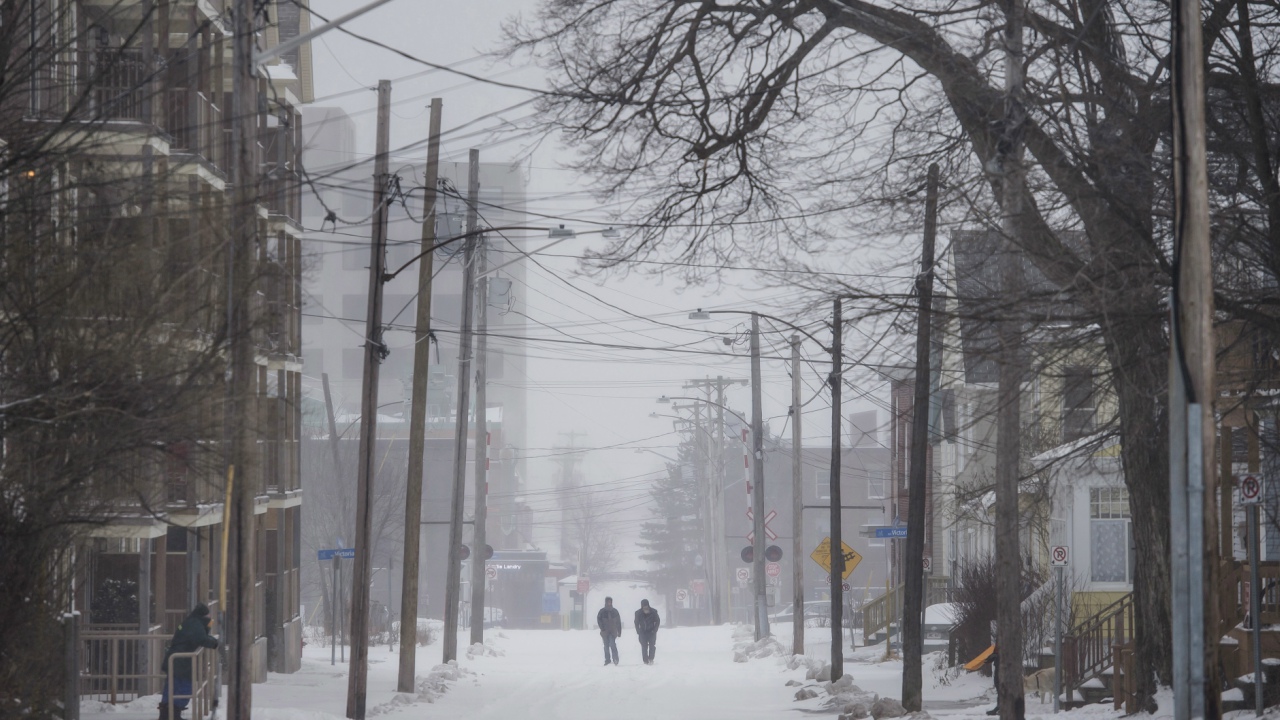 Pedestrians walk down the centre of the road in Moncton, New Hampshire, as a winter storm blows through Atlantic Canada on Christmas Day. (Darren Calabrese/The Canadian Press via AP)

The good news for many in the Northeast and Midwest was that it has been a white Christmas. The bad news was that a blizzard swept into parts of New England and bitter cold enveloped much of the Midwest.

Even the usually rainy Pacific Northwest got the white stuff. The National Weather Service says it's only the sixth time since 1884 that downtown Portland had measurable snow — only an inch or two — on a Dec. 25.

A blizzard warning was issued Monday for portions of Maine and New Hampshire, with forecasters saying snow of up to 10 inches (25 centimeters) and wind gusts up to 50 mph (80 kph) could make travel "dangerous to impossible."

Most businesses were already shuttered on Christmas Day in New England. One of the few open was The Tobacconist cigar shop in Tewksbury, Massachusetts, where area-resident Dwayne Doherty said he welcomed the fresh blanket of snow.

"I'm actually happy," he said, chuckling as he made his way to his pick-up. "We haven't had snow on Christmas at all in the last few years. It's actually perfect."

States from Montana and the Dakotas to Wisconsin expected wind chill temperatures in places at 40 below zero (40 below Celsius), the National Weather Service said. The upper half of Iowa and northern Illinois also braced for subzero temperatures.

Minnesota was experiencing its most frigid Christmas Day since 1996, with wind chills as cold as 35 degrees below zero, KSTP-TV reported. The National Weather Service warned that those whose skin was exposed in such conditions could get frostbite in as little as 15 minutes.

Snow amounts in the Midwest were not large for this time of year. A storm system that swept from Nebraska through Iowa dropped around 2 inches of snow on Chicago, the weather service said.

That was just enough to provide a picturesque backdrop for those gathering for Christmas dinners in the Chicago area. But it wasn't enough to cause havoc either on roadway or airport runaways.

Chicago's O'Hare International Airport was reporting just six cancelations and average delays of only 15 minutes around noon Monday. There were no cancellations at the city's other major airport, Midway, and delays were less than 15 minutes on average.

The nation's third largest city had comparatively little snow for the season until the weekend — just over 2 inches (5 centimeters) in all, the National Weather Service said.

The city of Milwaukee had 103 salt trucks treating slick spots Monday, according to WITI-TV. The trucks were using treated salt that's deployed when temperatures drop below 15 degrees.

In addition to slowing travel in New England, the storm was responsible for some power outages. Eversource reported more than 20,000 customers in eastern Massachusetts without electricity, the bulk on Cape Cod which was feeling the brunt of strong winds.

Most of Indiana had been under winter weather advisory with officials urging motorists to stay put unless they absolutely had to travel. Northern Indiana had been expecting up to 5 inches (13 centimeters) with slightly less in the southern part of the state.

New England was expected to get up to 8 inches (20 centimeters) of snow. Strong winds were predicted for Massachusetts, Connecticut and Rhode Island with gusts up to 65 mph (105 kph).

Mountain areas in parts of Colorado, Montana and Wyoming received more than 1 foot (30 centimeters) of snow, which started Saturday. It was good news for holiday skiers and resorts which have struggled with a slow start this season.

But it meant a heightened warning of avalanches in higher elevations outside of ski areas.