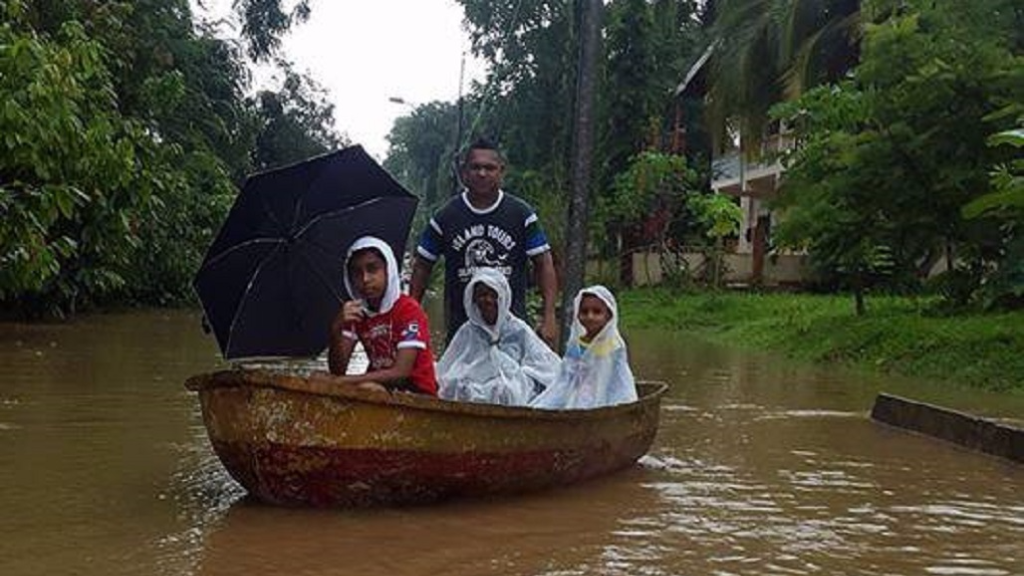 Government teams, NGOs, citizens and others rallied together to attempt to clean up the effects of recent disastrous flooding, even as more rain is forecast to pass over the island within the next few days.

Many areas, including Mayaro, Mafeking, Moruga, Debe, Penal, Couva, Barrackpore, St Helena, Caparo, Kelly Village, and more, were devastated by flooding as a result of heavy rains last week and over the weekend.

More rain is scheduled to pass over the country within the next 24-48 hours.

Mayaro MP Rushton Paray said the focus is now on cleaning up and assisting residents who were affected. The Office of Disaster Preparedness and Management (ODPM) reported that 800 reports were made for flood damage in the Mayaro/Manzanilla area alone.

Paray said the Manzanilla-Mayaro road is still partially flooded and is not accessible to low vehicles, however SUVs and trucks may still pass with caution.

“Flooding has dissipated from affected communities, but there is still water on the Manzanilla-Mayaro Road which is still impassable to low vehicles.”

“In terms of our tasks between yesterday and today, we are now in clean-up mode,” he said, adding that 340 homes were assessed and reports taken by the Disaster Management Unit.

He added that 150 people from CEPEP are out assisting residents with cleaning up, while the regional corporations are employed in cleaning up tanks and other infrastructure.

Local government representatives, NGOs and others were active on Monday carrying out clean-up activities on Sunday and Monday.

“The Corinth/ Cedar Hill Coordinating Committee under the patronage of Councillor Shawn Premchand coordinated their 4th Disaster Relief Efforts for Flood Victims of South Trinidad. Thanks to all who contributed and volunteered their services. Special thanks to the MP for Naparima Hon Rodney Charles, The MP for Princes Town Hon. Barry Shiva Padarath and The Hon. Kamla Persad Bissessar for their support and guidance,” said Premchand in a social media post on Sunday.

The Penal/Debe area was also afflicted by severe flooding. Councillor Shanty Boodram was on the ground assessing damages and giving out relief items to residents who were affected by flooding.

The Penal/Debe region is also in desperate need of mattresses, food supplies, water, medical supplies, cleaning supplies and anything else that can render assistance to persons marooned in their homes and affected by flooding.

Members of the UNC relief team along with Councillor Amit Sooknanan and a team of volunteers from Building T&T, Foundation for Social Upliftment, T&T Global Initiative and SewaTT, carried meals and water to assist flood-affected residents in El Socorro South.

Moruga councillor Joseph Lorant along with NGOs, military personnel and others braved the flood waters to issue relief items to residents in parts of Moruga over the weekend and on Monday.

Lorant said he was encouraged by the show of support from the community.

“Today my heart smiled with the assistance that was rendered to my electoral district for yet another day and another time. Much thanks to the ASHNAD Foundation; Barrackpore Islamic Centre (BIC); Trinidad & Tobago Defence Force (TTDF); Vidic Board; Baksh Construction Services Ltd; Mud Outlaws off-road crew and the hundreds of Volunteers that assisted in the delivery of breakfast, lunch and hampers. Much thank to the chairman of council, chairman of disaster and other council members with special thanks to Councillor Rafi Mohammed,” he said Monday.

Arriving by canoe, she visited residents of Mahadeo Trace, Debe on Friday who were victims of severe flooding.

Kumarsingh said she has been visiting residents since last Thursday after heavy rains fell, collecting data and distributing relief items.

Donations of flood relief items are being accepted by the Barrackpore West Office. If you wish to assist please call 270-1949.

Councillor for Kelly Village/Warrenville, Samuel Sankar, said although flood waters have subsided, preparations must be taken to ensure that flooding of this nature does not happen again.

Sankar, a member of the St Augustine Rotary Club, said he has been out visiting flood-affected residents to assess damages in over the weekend and on Monday.

“The challenge is that it’s been only four months since Tropical Storm Bret. People have not yet fully recovered coming out of that. They’ve had severe losses in terms of equipment, household appliances, furniture etc. and as of now not all of them have been able to access the assistance they were promises, nor have they been visited by the Ministry,” he said.

He said however that he has taken data to facilitate the relief assistance process.

He added that roads which were affected during the last set of heavy weather still have not been repaired and will worsen with continued floods.

He added that the delay in garbage collection exacerbates flooding, as material is washed away into rivers.

“We have a garbage issue, with the contractors. We clean the drain, and place it at the side of the roads for collection, then rain falls and you have flooding, and everything is washed back into it. It’s a plaster on the plaster,” he said.

Sankar added that there is a communication problem between the local and central agencies in order to ensure that these matters are addressed.

Contacts are as follows: