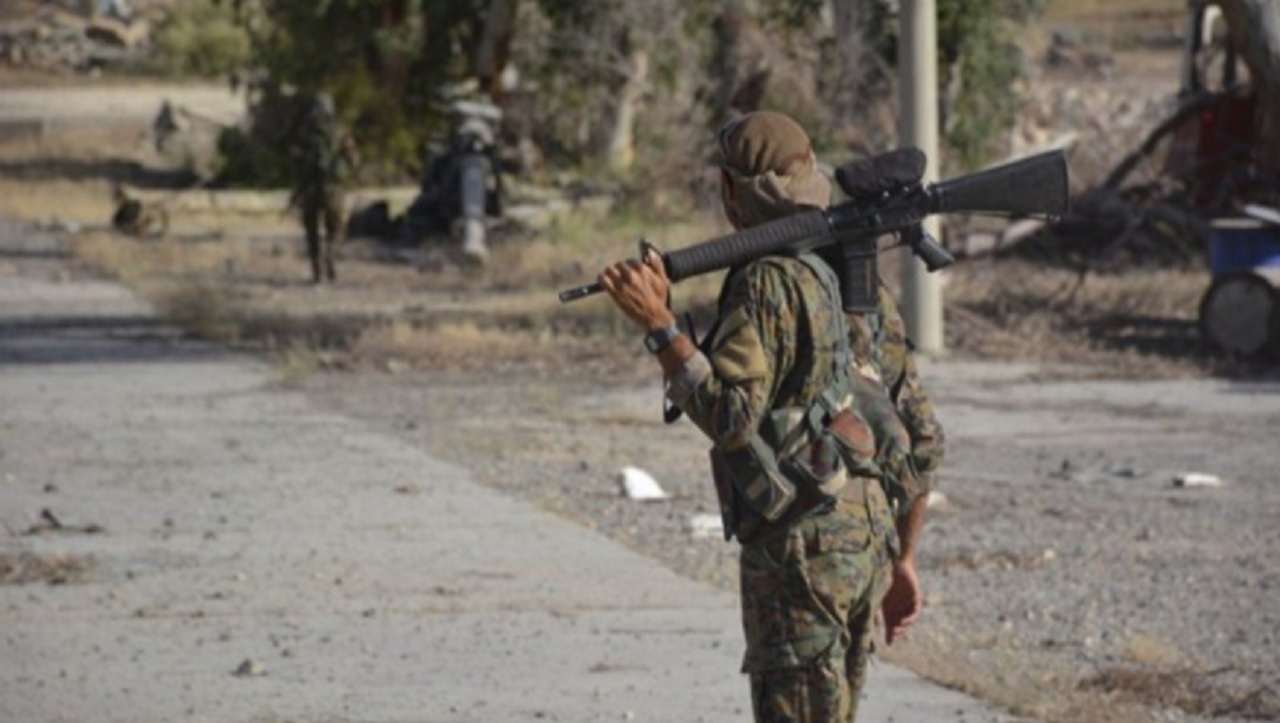 In this undated photo released Thursday, May 11, 2017, by Hawar News, the news agency for the semi-autonomous Kurdish areas in Syria, shows fighters from the Kurdish-led Syria Democratic Forces, patrolling on a street in Tabqa, northern Syria.

The capture of a key Syrian town and a nearby dam from Islamic State group militants by Syrian Kurdish-led forces undermines the IS’s ability to defend its de facto capital, Raqqa and disrupts its ability to plan attacks in Western countries, the U.S.-led international coalition said Thursday.

Tabqa and the nearby dam, Syria’s largest, were seized a day earlier in an offensive that lasted nearly seven weeks, with the backing of airstrikes from the international coalition. The Kurdish-led forces were clearing the town and the dam Thursday of land mines, the militants’ favourite weapon.

The fall of Tabqa also denies militants “a key coordination hub” that had been used by the group’s foreign fighters since 2013 to plan attacks against the West, the coalition said in a statement. Tabqa had served as a base for the planning such operations after the militants lost other territories in northern Syria.

The capture of Tabqa sets the stage for an advance on Raqqa, some 25 miles (40 kilometers) to the east.

Coalition spokesman Col. John Dorrian said the capture of Tabqa is “yet another victory” for the Kurdish-led forces, the U.S.’s most effective partner on the ground in Syria fighting IS. He earlier said that after Tabqa is secured, the Syrian Kurdish-led forces will continue operations to “isolate and seize Raqqa.”

The capture of Tabqa came a day after the Trump administration announced it will supply the Kurdish-led Syrian Democratic Forces with heavier weapons, a decision that infuriated Turkey, which views the main Kurdish militia in the group as an extension of an outlawed rebel movement fighting an insurgency in its southeast. The SDF, which also includes Arab fighters, has captured large swathes of land in northern Syria from IS with the help of U.S.-led airstrikes.

The spokesman for the Kurdish militia that forms the backbone of the fighting force known as the People’s Protection Units, or YPG, told The Associated Press on Thursday that his group will seek “neighborly relations” with Turkey.

“From our side, we want to keep good neighborly relations with Turkey,” Redur Khalil said in a series of messages from Syria.

He called on Turkey to let go of its “unjustified” fears of the group.

Turkish President Recep Tayyip Erdogan called on the U.S. to reverse its decision, saying weapons in the hands of the Kurdish-led forces are a “threat” to his country. Unnerved by the Kurdish advances along the border, Turkey sent troops into Syria last year to help allied Syrian forces battle IS and block the SDF.

The Trump administration says it will supply the Syrian Democratic Forces, of which the YPG is the main component, with heavier weapons ahead of a push on the northern Syrian city of Raqqa, the IS group’s de facto capital. Talal Sillo, a commander with SDF, said no weapons have yet been delivered to the group but that the US-led coalition had said that fast delivery was expected from weapons already in Syria with the international coalition.

Ankara views the YPG as an extension of the Kurdistan Workers’ Party, or PKK, which has been waging a decades-old insurgency in Turkey. The U.S. and other Western nations also view the PKK as a terrorist group.

Khalil dismissed the label, saying the U.S. would not supply arms to terrorists.

In the statement Thursday, the international coalition said with the capture of Tabqa, the SDF has further isolated Raqqa and “will continue to pursue the military defeat” of IS throughout Syria.

The statement said that in the final days of the battle, around 70 IS fighters withdrew from the town, leaving heavy weapons behind them. The move allowed for the dismantling of land mines around the dam, averting a humanitarian disaster.

Concerns were raised earlier this year that the dam could be damaged in the fighting or degraded by lack of maintenance, or that the extremists might sabotage it to flood the surrounding areas.

Dorrian said 30,000 residents had been displaced since the fight for Tabqa began on March 21, and that the priority was now to protect those who remained.

US: About 200 civilians mistakenly killed in Iraq, Syria