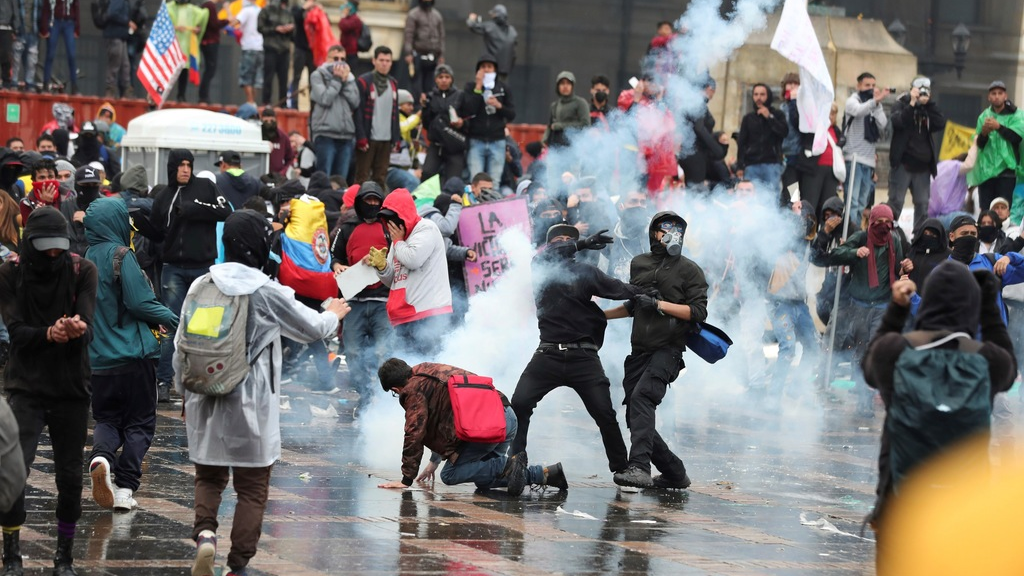 Anti-government protesters clash with the police during a nationwide strike, at Bolivar square in downtown Bogota, Colombia, Thursday, Nov. 21, 2019. Colombia's main union groups and student activists called for a strike to protest the economic policies of Colombian President Ivan Duque government and a long list of grievances. (AP Photo/Fernando Vergara)

(AP) Colombians angry with conservative President Iván Duque and hoping to channel Latin America’s wave of discontent took the streets by the tens of thousands Thursday in one of the biggest protests in the nation’s recent history.

Students, teachers and labour union organisers marched across the country protesting everything from economic inequality to violence against social leaders, testing an unpopular government as unrest grips the region.

“It’s about time,” said Julio Contreras, 23, a medical student. “No more of the same – lies, corruption. We’re here to put up a fight.”

The protests were largely peaceful but by early evening turned increasingly violent as demonstrators hurled rocks at riot police, who responded with tear gas. At one point, protesters tried to enter the nation’s congress and tore down a part of black cloth protecting a historic building in the iconic Plaza Bolivar. 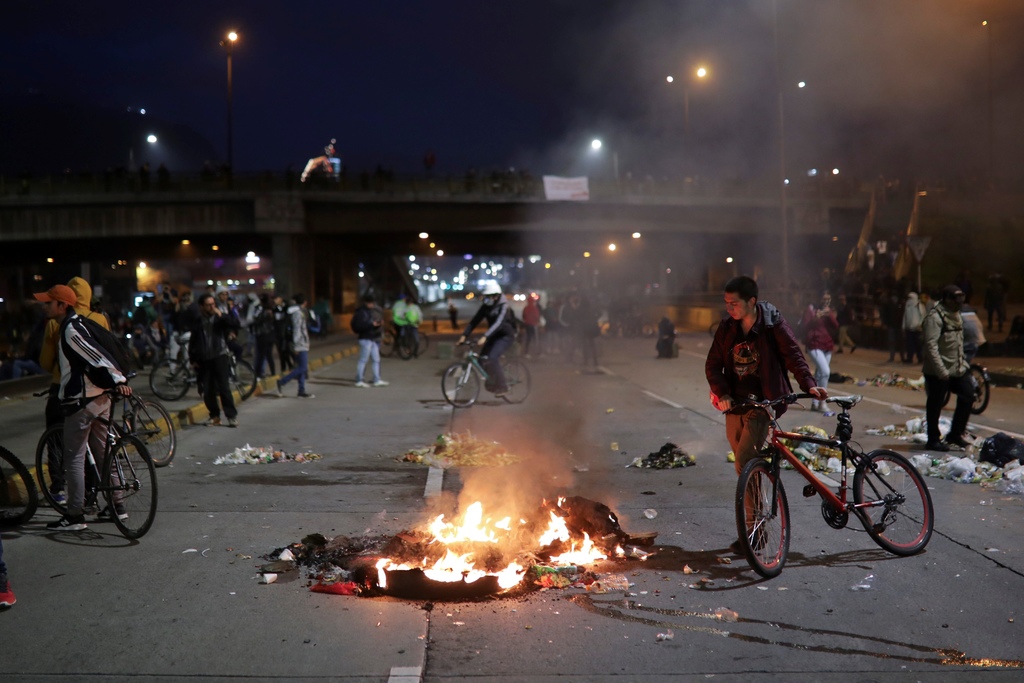 Analysts were skeptical the march would generate any prolonged unrest like that seen recently in Bolivia, Chile and Ecuador, noting a lack of unifying factors in a divided country that is one of the region’s stronger economic performers.

“We’re not in a pre-insurrectional climate,” said Yann Basset, a professor at Bogota’s Rosario University. “I’m not sure there’s a general rejection of the political system.”

The protest nonetheless sent a resounding message to Duque, whose government deployed 170,000 officers to enforce security, closed border crossings and deported 24 Venezuelans accused of entering the country to instigate unrest.

“If the government doesn’t make changes next year will be very difficult,” said Ariel Ávila, deputy director of the Peace and Reconciliation Foundation.

Duque, who has a lackluster 26 percent approval rating, went on a charm offensive leading up to the march seeking to connect with citizens and counter erroneous claims on social media that he has proposed to raise the retirement age and reduce wages for young workers.

In a late-night address after the protest, he praised citizens for exercising their right to protest.

“Today Colombians spoke,” he said, “and we are listening.”

Still, many Colombians say they have plenty of reasons to be angry. 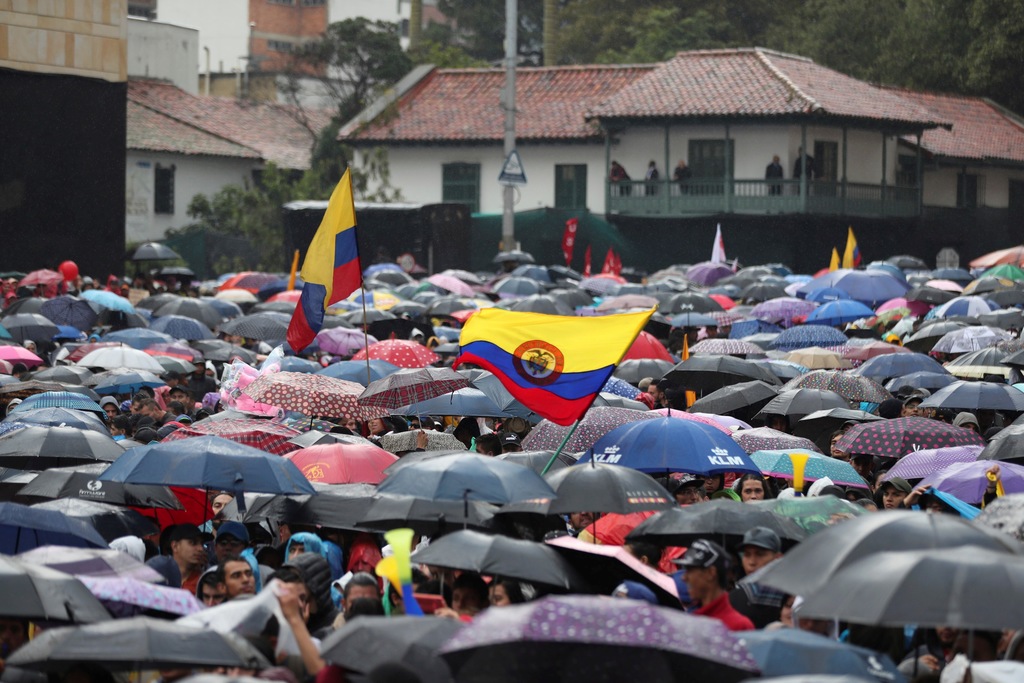 Despite the previous administration’s 2016 peace accord with leftist rebels, much of Colombia is still engulfed in violence as illegal armed groups compete for the territory where the state has historically been absent – and could take years to establish a presence. Dozens of indigenous and social leaders have been killed in crimes that remain largely unsolved. The government has made a small dent in reducing coca crops, but fields of the plant used to make cocaine still cover wide swaths of the country.

Meanwhile, Duque’s government has faced a series of embarrassing setbacks.

Defense Minister Guillermo Botero resigned in early November following revelations that at least eight minors had been killed in a bombing that targeted a small band of dissidents. Duque’s key ally, former President Álvaro Uribe, is under investigation for alleged witness tampering and is also sliding in popularity. And Duque himself drew criticism after holding up photos at the U.N. General Assembly that he said were proof that the socialist government in neighbouring Venezuela harbours Colombian rebels – only to find out later that at least one of the images was taken in Colombia.

Colombia’s economy has been growing at a faster rate this year, but the nation still has one of the highest levels of inequality in South America. Nearly 11 percent of Colombians are out of work – a figure that jumps to 17.5 percent for young adults.

On Thursday, Bogota’s perpetually congested streets were largely free of vehicles as droves of protesters marched toward the city’s historic Plaza Bolivar. Demonstrators gathered under a light rain, packing the square in a sea of purple, blue and green umbrellas and at one point breaking through barricades and climbing up a statue of independence hero Simón Bolívar.

Some carried signs painting Duque as a pig. Others danced in bright-coloured skirts and straw hats, giving the protest the feeling of a festive parade.

“We are standing up to protest and tell all humanity that we need to demand change,” said Aida Prado, 26, an actress waving a white flag.

Authorities said dozens were injured, including 37 police officers and 42 civilians, most of whom sought medical treatment after inhaling tear gas. At least 36 people had been detained, though it was unclear how many would face charges.

In one incident near Cali, police said protesters broke the window of an ambulance transporting a patient, injuring the driver. The mayor of the southwestern Colombian city announced a 7 pm curfew after several businesses were looted. Meanwhile in Bogota, student protesters complained about a heavy-handed police response after they veered off the established demonstration route.

“We are out to defend education and the people, but the police are only here to violent attack us,” said Richard Bernal, an economics student wearing a gas mask.

Unlike other recent protests, there is no one crystalising event that sparked the demonstration, but rather an array of complaints that vary widely depending on who is asked.

Comments from Cabinet ministers on potential financial reforms have raised concerns among union members about pension and work rule overhauls – though Duque’s administration insists such proposals do not exist.

Student groups accuse the government of not fully complying with an agreement to boost education funding after a swell of protests last year. Duque has increased the education budget to what he says is the highest level in Colombia’s history, while student activists contend science funding is still lacking.

Student leader José Cárdenas said demonstrators would evaluate what actions they might take in the days ahead to keep momentum going.

“What happened in Chile sent a forceful message,” he said.

Analysts are nonetheless doubtful that Colombia’s protest will come close to resembling the mass demonstrations in Chile and elsewhere, noting several key variances, even if there are some similar underlying economic factors like steep inequality and a rising cost of living.

The protest comes right before the holidays and doesn’t have a clear direction, set of goals or leaders – though Ávila said it should still be considered a success because it compelled Duque to double down on insisting no labor or pension reform is in the works and for bringing so many people to the streets.

Others pointed out that voters widely rejected Colombia’s governing party in recent elections, suggesting that many people still see an avenue for change through opposition parties, which are seeing a resurgence.

“That speaks to a system where there are still alternatives,” Basset said. “It’s very different.”

Catalans march on Barcelona after 2 nights of violence