Complacency a concern while AIDS treatment improves in Africa 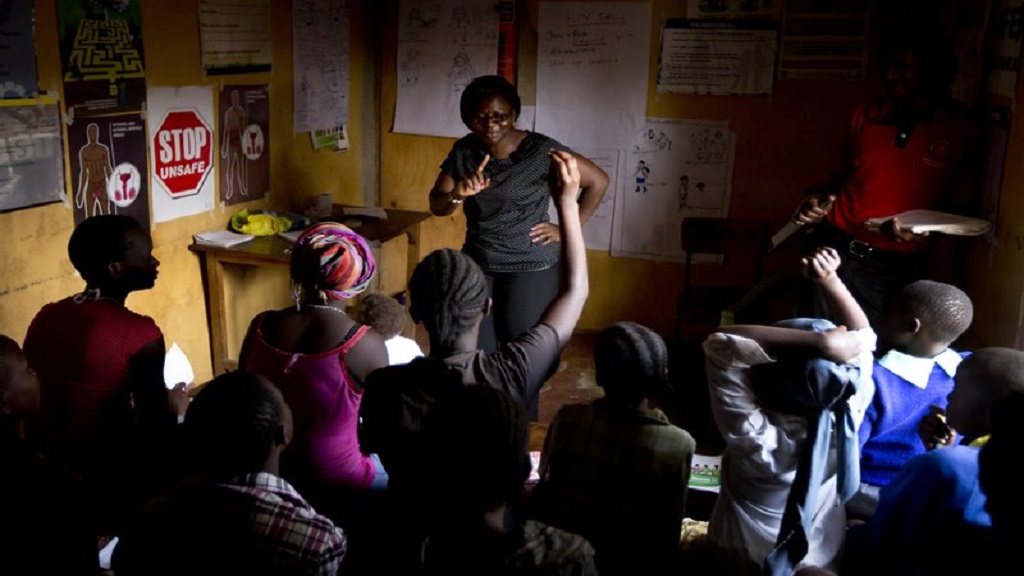 In this February 16, 2015 file photo, HIV-counseling and prevention course facilitator Evelyn Ojwang (centre), along with a colleague (partly hidden at right), conduct an HIV prevention session with a group of affected or at-risk children, adolescents and adults in Kenya. (AP Photo/Ben Curtis, File)

AIDS has no cure. HIV is still here. But some people are forgetting that.

Those are some of the bold messages Uganda’s leader is emphasising as health officials try to stem stubbornly high infection rates among young people in this East African country that years ago won praise as a global leader in fighting the epidemic.

In many parts of sub-Saharan Africa, the region most affected, fewer people are dying from AIDS as treatment is more widely available and patients live normally. Yet some officials and activists worry that success may be encouraging a sense of complacency.

The head of HIV prevention at Uganda’s AIDS agency, Dr Daniel Byamukama, recently asked leaders of a popular church that organizes a retreat for young people to give him 20 minutes to make a presentation about AIDS. They turned him down, saying “AIDS is common sense” these days.

Many young people believe “HIV is gone,” he told The Associated Press.

In Uganda and neighboring Kenya, countries with two of the world’s highest AIDS rates, campaigners point to lower-than-satisfactory HIV testing rates among adult men, early sexual experiences among many adolescents, inadequate knowledge of HIV and reproductive health and even what UNAIDS calls “a crippling fear of buying condoms” among many Ugandans.

Now Ugandan President, Yoweri Museveni, who earned praise in the 1980s for his government’s openness in public campaigns against HIV, believes officials have focused too much on treatment in recent years and wants them to speak simply to young people with messages noting that “HIV is here with us”.

“Why are you in a hurry to have sex at 16, at 18, at 20 and then you die, or you start having problems which you may live with all your life? Why don’t you wait, hold on, you study, finish your degree and then look for a partner at the right time?” Museveni says in a video released as part of a new campaign backed by UNAIDS, a United Nations agency.

More than 37 million people were living with HIV worldwide in 2018, with Africa accounting for nearly one in every 25 adults infected with the virus, according to the World Health Organisation.

Africa’s young people, especially girls, are among the worst affected. Girls made up 79% of new HIV infections in people ages 10 to 19 in East and southern Africa in 2017, according to UNAIDS.

More than 90 per cent of deaths worldwide from AIDS-related illness among adolescents occurred in sub-Saharan Africa in 2017, UNAIDS says.

And infection rates among young people likely will rise as Africa experiences a youth boom, with its population of over 1.2 billion expected to double by 2050, according to the UK-based AIDS charity Avert.

Health authorities and campaigners in Uganda, with over 70% of its population under age 30, say the fear factor once associated with HIV has dissipated, partly encouraging risky sexual behaviour. Only nine per cent of men aged between 30 and 44 used a condom when they had extramarital sex in 2018, according to official statistics showing a declining rate of condom use.

That’s a shift from the past.

Uganda, with its ABC strategy — for abstinence, faithfulness and condom use — brought the HIV rate there from 18 per cent in 1992, to under 10 per cent by 2005. Although the HIV rate now stands at just over six per cent, the population has soared from 15 million in 1986 to over 42 million today, and in some parts of the country the rate is higher than the national average.

“A lot of the young people, now adolescents, were not old enough to see the old HIV, how aggressive it was,” said Dr Nelson Musoba, chief of the Uganda AIDS Commission. “We are telling them that... if you are not an adult, please abstain.”

Ugandan students of a certain generation often were shown videos of the devastating toll of AIDS on the body, and then told to postpone the first act of intercourse. That bluntness was widely seen as effective in discouraging risky sexual behaviour.

Rubaramira Ruranga, a Ugandan campaigner who has lived with HIV for 35 years, said it is clear the current view of AIDS as just another chronic disease partly encourages risky behaviour, as people know there is medicine one can take shortly after sexual contact to prevent HIV.

“There is this thing that there is medicine, and the psychological part of the problem is almost forgotten,” he said. “Prevention is being misunderstood”.

Earlier this year, Ugandan health authorities released a report saying an estimated 1,000 people get infected with HIV every week, 34 per cent of them between ages 15 and 24.

Rahab Mwaniki, a campaigner with the Kenya AIDS NGOs Consortium, cited the problem of “early sexual debut,” saying it leads to teenage pregnancies and exposes many to HIV in a country where 1.6 million people have the virus.

Both Kenya and Uganda have intensified efforts to promote self-testing. An oral HIV self-test kit, piloted in Kenya, was launched in Uganda in September by authorities who say they hope it will encourage more men to know their status.

Of the 1.4 million Ugandans living with HIV, 14 per cent are not aware of their positive status. It means they are not getting treatment and can infect others.

HIV testing “in their privacy and their convenient time” shields men from the rampant stigma preventing many from seeking HIV services in a hospital setting, Mwaniki said.

Health officials have similar worries about HIV and youth in southern Africa, the world’s hardest-hit region. In South Africa, sub-Saharan Africa’s most developed country, just 23 per cent of young men have “correct and comprehensive knowledge” about the virus, according to UNAIDS. South Africa has more than seven million people living with HIV, the most of any country.

The U.N., which in August named Ugandan activist Winnie Byanyima to lead its AIDS agency, is leading efforts to end the global epidemic by 2030.

Byanyima, who has lost many relatives and friends to AIDS, said after her appointment that while the goal is within reach, “I do not underestimate the scale of the challenge ahead”.

She has since spoken of the need in Africa “to remove the barriers and harmful social norms” which leave young people, especially women, more vulnerable to getting HIV.

Jamaicans urged to unite in fight against HIV/AIDS

Living with HIV: A real-life experience