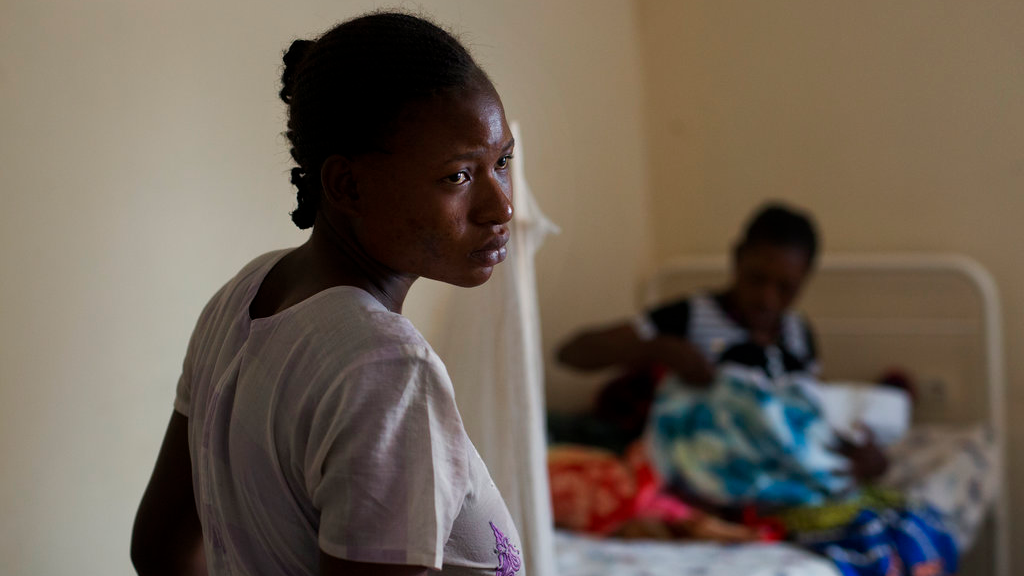 Alice Kabuya, 20, stands in the Masaidizi Health Center in Lubumbashi, Democratic Republic of the Congo on Tuesday, Aug. 14, 2018. She gave birth to her daughter at the facility and cannot pay the $150 medical bill. Her jobless husband is trying to gather the funds so she had their daughter can be released. (AP Photo/Jerome Delay)

The most surprising thing about the fact that Congolese hospitals detain patients who fail to pay their bills is that it's no secret: Administrators, doctors, and nurses openly discuss it, and the patients are held in plain sight.

An Associated Press investigation found that only one of more than 20 hospitals and clinics visited in the copper-mining metropolis of Lubumbashi did not routinely imprison patients. Though government officials condemn the illegal practice and say they stop it when they can, a Ministry of Health official in Kinshasa noted that "health officials cannot be everywhere."

The only ones who claim they don't know what's happening in Congo, it seems, are more than a dozen major health donors and agencies who invest billions of dollars in the country and have major operations there — including the European Union, UNICEF, the International Committee of the Red Cross, PATH, Save the Children, the U.S. Agency for International Development and World Vision. They all told the AP they had no knowledge of patient detentions or insufficient information to act.

But such imprisonment practices would be obvious to anyone who follows a long, dark corridor at the Katuba Reference Hospital to a grimy, roach-infested room that houses the hospital's longest-staying residents: Kimenua Ngoie, who has been there for nearly four months since losing her first baby in a complicated cesarean section and Gabriel Mutamba, in his 80s, who arrived with a broken leg more than a year ago.

Though Ngoie and Mutamba are now healthy enough to be discharged, they have been effectively imprisoned because they cannot pay. Ngoie's bill stands at $360 while Mutamba's is $1,477.

"There is a God so I'm not afraid to give birth again," said Ngoie, 22. "But my deepest desire right now is just to leave the hospital."

Such detentions are not unusual, in Congo, across much of Africa or in places ranging from the Philippines to Bolivia.

"When we detain patients, this is not something that is unique to our hospital," said Leedy Nyembo-Mugalu, administrator of the Katuba Reference Hospital. "This happens everywhere."

For the hospitals, holding patients is mostly an act of financial desperation. Most lack basic drugs, running water and regular electricity. Bed shortages are often so severe that two patients must squeeze onto a single mattress. At the Katuba Reference Hospital, sterilizing surgical tools means placing them in a pot of boiling water.

"It's very hard when we have to detain somebody, but we have to recuperate the costs of the products we use, or else we can't treat other patients," said Dr. Veronique Kashala at the Centre Medicale de la Victoire.

Kashala recalled a baby girl who was held for a month this spring after being treated for meningitis, when her family failed to pay $63.

The infant's parents finally brought in their pastor, who contributed about $50. That was enough to convince the clinic to release her.

Mike Ahern, Congo field coordinator for the International Rescue Committee, was touring a Goma hospital with which the IRC was partnering when he saw about a half-dozen women sitting on the ground in a room that had bed frames, but no mattresses. He asked why they were on the floor.

"The response was very simple: 'We make them sit on the floor to encourage them to pay'," he recalled, adding that one woman had been there more than a month and all of them owed between $50 and $200.

Ahern arranged for the IRC to pay to get the women released, within the confines of its project. It was, he said, "only a Band-Aid solution"; once IRC left, the problem would inevitably resurface.

Given how brazenly transparent hospitals are about imprisoning patients in Congo, it is difficult believe that international agencies in Congo could be unaware of patient detentions.

At Lubumbashi's Sendwe Hospital, Columbia University's ICAP and other partners run an AIDS program funded by the U.S. President's Emergency Plan for AIDS Relief (known as PEPFAR). The program is housed in a separate, recently built unit on the hospital grounds — just a short walk away from the hospital's maternity center. There, seven women who couldn't pay their delivery charges were being detained with their babies in early August in a ward with gaping holes in the ceiling.

Dr. Juliana Soares Linn, ICAP's principal investigator in Congo, said the program had been working in the country on AIDS since 2010 and has "very close relationships" with hospital directors. She declined to comment on whether ICAP had ever seen patient detentions in Congo; PEPFAR, which has invested about a half a billion dollars in Congo's health system since 2004, also declined comment.

At Lubumbashi's Hospital General de Reference Kenya, where stickers showed that many of the computers, printers and even office fans were paid for by USAID, administrator Aimerance Kapapa said some detained patients sweep hallways, mop corridors or mow the grass to offset their debt.

A spokesman for USAID, speaking only on condition of anonymity, would only say the agency was working to ensure that "unexpected (health) costs do not cause undue financial burden on families." The agency did not respond to questions about whether it was aware of hospital detention practices in Congo or elsewhere.

Some organizations, such as the Global Fund, make grants contingent on countries upholding certain standards. The fund has invested about $1.5 billion in Congo, mostly for programs for HIV, tuberculosis and malaria, including hospitals and health centers, and its contracts specify that medical detentions "are to be used only as a last resort."

Karen Cowgill, an assistant professor at the University of Washington who has studied patient detentions in Congo, said external agencies should at least acknowledge publicly that patient detentions occur, so that the issue can be addressed by the wider community.

The donors, she said, tend to stick to specific programs, like those for AIDS, rather than investing in general health care. "It's really tough because donors are worried about their funds disappearing in a broken system, so they just focus on how their particular program is working," she said.

Robert Yates, a health policy expert at the British think tank, Chatham House, said the World Health Organization could at the very least issue a resolution condemning the practice; the agency issued 16 such statements at their annual meeting this year, including some on snake bites and rheumatic fever.

"As part of their drive for universal health care, WHO could sit down all the health ministers and say we publicly commit to ensuring we're not illegally locking up people in our health facilities," he said. "As uncomfortable as this might be for everyone, the U.N., governments and donors need to confront this issue as a human rights abuse and then actively monitor this so that it can be officially banned and ended."

But it is admittedly challenging for such institutions to ensure that hospitals like the Centre de Sante Masaidizi — a facility built and paid for by the United Nations — are sufficiently funded so they can operate without holding patients for ransom, as they effectively did with Alice Kabeya, a young mother detained there with her newborn daughter in August. She said the clinic's doors were locked every afternoon and that she could not walk more than about 10 feet outside without being reprimanded by nurses.

Administrators at the Polyclinique Medicare said they would have to shut their doors if patients like 3-year-old Adrielle Nyembwe didn't pay. The boy was being held at the central Lubumbashi clinic in August after being treated for sickle-cell anemia. He had been medically cleared to be released, but had an outstanding bill of $850.

"Nobody in our family has the money to pay," said Adrielle's 23-year-old mother, Ado Ntanga, cradling him in her arms. "I hope we can find someone to help us soon. Because if it's up to the hospital, we will never be free."

More than two months later, Adrielle is still being detained at the clinic.

For some, the fear that a hospital stay might be interminable seems very real. At Sendwe Hospital, Lubumbashi's biggest public institution, a few surgical patients were detained for five to six years, according to Abel Ntambue, a Congolese doctor at the University of Lubumbashi. Ntambue said the patients lacked the means to pay for their treatment and that Sendwe eventually released them when they needed the space.

At the Polyclinique Goschen, medical director Dr. Disashi Tshimpuki described the case of a former soldier who was detained for nearly two years. Both of his legs had been amputated after he developed gangrene; his family had paid only a fraction of the $9,290 bill.

"At first, he had a lot of family that came to visit him," Tshimpuko said, "but then they deserted him."