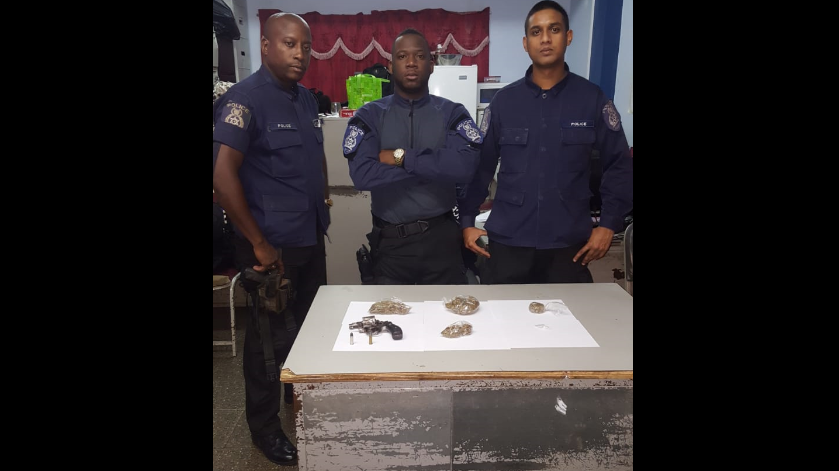 A quantity of marijuana, a firearm and ammunition were seized in the Malick area on Friday.

Four men are in police custody following a number of police exercises across Trinidad and Tobago on Friday.

Following a spike in criminal activity in Malick - reports of shooting and even a murder over the past three days alone - a police exercise was conducted in the district on Friday.

This exercise resulted in the arrests of two men and the seizure of drugs and a loaded weapon.

Both men were held for questioning on firearm-related offences; however, one of the suspects also faces an additional charge of possession of marijuana for the purposes of trafficking.

While he was only held with 121 grammes of the illegal drug, he was arrested within 500 meters from a school.

The officers also allegedly found and seized a loaded firearm and a quantity of marijuana along Upper Seventh Avenue, Malick.

The weapon, a .38mm revolver, was loaded with two rounds of ammunition.

Several packets of drugs, a combined total of 150 grammes, were also found and seized in the area.

The exercise was supervised by Snr Sup Balram, with assistance from ASP Ramesar, Inspector Beard, Sgt Guelmo, and Cpl Duncan, among several others.

In Marabella, a firearm and a quantity of ammunition were found during an anti-crime exercise.

Around 8:30 pm on Friday, officers of the Southern Division Task Force proceeded to an abandoned lot at Granada Drive, Union Park, where they found a .38 revolver containing two rounds of ammunition buried underneath a stone heap.

Investigations are ongoing into the find.

During an anti-crime exercise between 12 pm and 8 pm in the Rio Claro area, a 29-year-old man was arrested and charged with possession of a firearm and ammunition.

Around 12:30 pm, officers stopped a black Mazda wagon and conducted a search of the occupant.

One Steyr Mannlicher 9mm pistol was found in his pants pocket with a magazine containing two rounds of ammunition.

The suspect was taken to the Rio Claro Police Station where he was charged for possession of a firearm and ammunition.

And lastly, a 36-year-old Tobago man was charged with possession of cocaine for the purpose of trafficking after an anti-crime exercise in the Scarborough district on Friday.

Officers executed a search warrant at a Darrell Spring, Scarborough home, where 21 grams of cocaine was found in the washroom area.

The male occupant of the house was arrested and taken to the Scarborough Police Station.