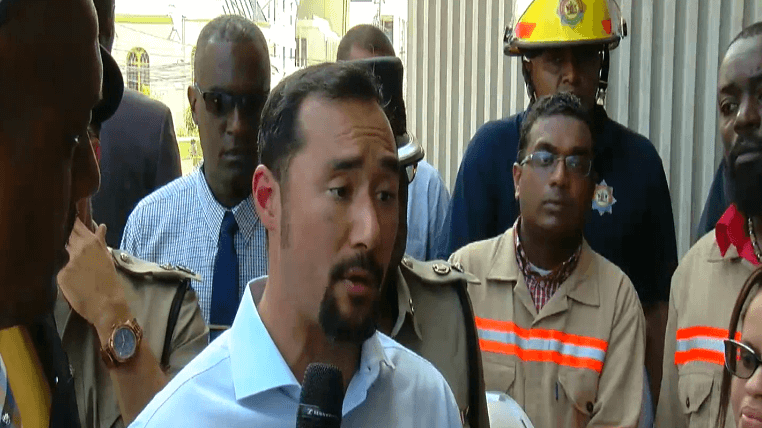 Minister of National Security and Communication Stuart Young addresses the media with an update on the explosion which occurred in Port of Spain on Friday morning.

Minister of National Security and Communications Stuart Young is now assuring the public that there is no security threat in the capital city at this time.

Speaking to the media near the scene of an 'explosion' at the corner of Duke and Abercromby Streets, Young said initial investigations strongly suggest the explosion was caused by an underground cable fault.

He said, “Preliminary investigations suggest, with a degree of certainty, that what took place this morning was the explosion of a T&TEC underground cable fault. So at this stage, based on all the investigations that have taken place in the last two hours, it does not appear as though there is any security threat.”

The explosion reportedly occurred at 9:35 am.

CCTV footage of the incident has surfaced, showing the moment the drain near the roadway flares up.

The National Security Ministry is just a stone's throw away from the Hall of Justice.

After the explosion was heard, scorch marks were observed on the drain and the pavement, along with some debris.

The police were immediately notified and the area was cordoned off.

Teams of officers from the Port of Spain Division led by ACP Hackshaw and Snr Sup Hodge Griffith, are on location, along with more police vehicles with heavily armed personnel, bomb technicians and the K-9 unit.

No injuries have been reported.

The Trinidad and Tobago Electricity Commission (T&TEC) has confirmed that the minor explosion was caused by a fault on an underground electrical cable at the corner of Duke and Abercromby Street, outside the Hall of Justice.

Engineers responded immediately and restored the electricity supply to those affected in Port of Spain.

T&TEC said the fault was isolated and repairs will begin later today. The cause of the fault remains undetermined at this time.