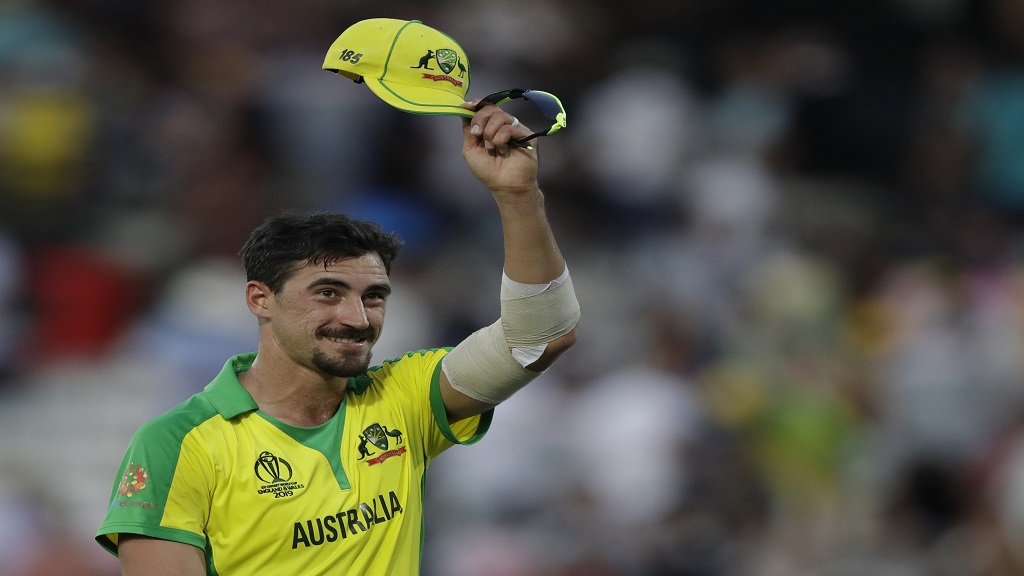 Australia's Mitchell Starc raises his cap to the crowd as he walks off the field after Australia defeated New Zealand by 86 runs in their Cricket World Cup match at the Lord's cricket ground in London, Saturday, June 29, 2019. Starc took 5 wicket in the match .

The Black Caps would have joined Australia in the last four with a win in London, but they could now face a win-or-bust encounter with England in their final group match at Chester-le-Street on Wednesday.

Boult (4-51) became the first New Zealand player to take a World Cup hat-trick, restricting Australia to 243-9 after Aaron Finch won the toss and elected to bat on a testing surface in a repeat of the 2015 final.

Usman Khawaja (88) and Alex Carey (71) ensured the holders gave their bowlers something to defend, with Lockie Ferguson and Jimmy Neesham taking two wickets apiece on a glorious afternoon.

Kane Williamson became the third-fastest to 6,000 ODI runs and top-scored with 40, but New Zealand collapsed to 157 all out in the day-night contest to suffer a second defeat of the tournament.

The brilliant Starc (5-26) claimed his seventh five-wicket ODI haul and Jason Behrendorff (2-31) also did damage as Australia - already assured of a semi-final spot - moved three points clear of India at the top of the table.

New Zealand lead England, down to fifth after Pakistan's win over Afghanistan, by three points and the hosts have a game in hand against India at Edgbaston on Sunday.

Martin Guptill has two of the safest hands in the game, but the opener put down a tough one-handed catch to get rid of the in-form Finch before Australia were off the mark.

That did not prove to be costly, as Boult snared the in-form captain for only eight, but Guptill also put Khawaja down on nought at second slip.

Guptill made partial amends with a spectacular one-handed diving grab for Ferguson - who got David Warner with a rapid short ball - to remove Steve Smith for only five at leg gully. Neesham also pulled off a pearler of a catch to dismiss Glenn Maxwell, putting Australia deeper in the mire on 92-5.

BOULT FROM THE BLUE

Khawaja and Carey came to the rescue with a stand of 107, the wicketkeeper-batsman the aggressor, hitting 11 fours, as his fellow left-hander batted with great application, sweeping expertly and rotating the strike well.

Part-time bowler Williamson ended the partnership, Guptill taking another catch to see the back of Carey, but Khawaja hung around before Boult's magical final over.

The left-armer quick yorked Khawaja and Mitchell Starc - giving his fellow paceman a taste of his own medicine with a peach of a delivery - and made history by trapping Jason Behrendorff for a magnificent hat-trick.

Paceman Starc led the way with 4-43 in Australia's defeat of England on Tuesday and the tournament's leading wicket-taker excelled again on the same ground.

New Zealand never really got going and folded after Williamson (40) and Ross Taylor (30) departed, Starc seeing the back of the skipper as well as Tom Latham - to an outstanding catch from Smith - and Ish Sodhi.

Starc was on a hat-trick when he cleaned up Ferguson and although Boult kept it out, New Zealand were put out of their misery when the hostile fast bowler dismissed Mitchell Santner.

Behrendorff earlier had Guptill leg before for only 20 and Henry Nicholls caught behind, while Smith had Colin de Grandhomme caught first ball in the deep on a grim evening for New Zealand.