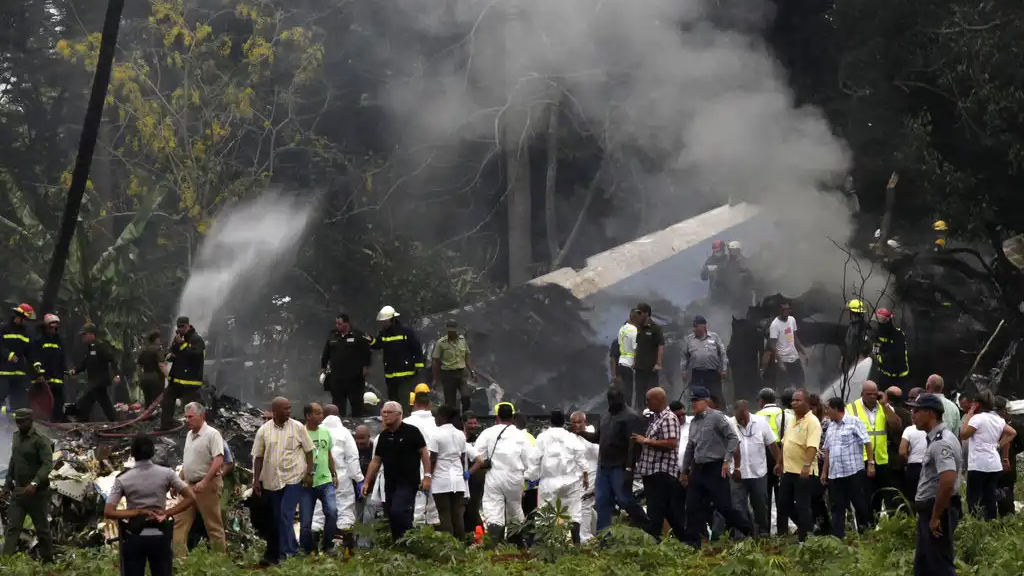 Rescue teams search through the wreckage site of a Boeing 737 that plummeted into a cassava field with more than 100 passengers on board, in Havana, Cuba, Friday, May 18, 2018. The Cuban airliner crashed just after takeoff from Havana's international airport in Havana, Cuba. (AP Photo/Ramon Espinosa)

The only three survivors of Cuba's worst aviation disaster in three decades were clinging to life Saturday, a day after their passenger jet carrying 110 people crashed in a fireball in Havana's rural outskirts.

Carlos Alberto Martinez, director of the Calixto Garcia Hospital in the Cuban capital, said doctors are always hopeful that their patients will recover, but he acknowledged that the three Cuban women were in extremely grave condition.

"We must be conscious that they present severe injuries," Martinez told a small group of journalists. "They are in a critical state."

Meanwhile, relatives of those who died gathered at a morgue in the capital, weeping and embracing each other, as investigators tried to piece together why the aging Boeing 737 went down and erupted in flames shortly after takeoff early Friday afternoon.

And the Cuban Council of Churches announced that 20 clergy members of an evangelical church were among the dead.

"On that plane were 10 couples of pastors, 20 people. All of the Nazarene Church in the eastern region," said Maite Quesada, a member of the council.

The pastors had spent several days at a meeting in the capital and were returning to their homes and places of worship in the province of Holguin.

Skies were overcast and rainy at the airport at the time of Cuba's third major air accident since 2010, and state television said the 39-year-old jet veered sharply to the right after departing on a domestic flight to the eastern city of Holguin.

Eyewitness and private salon owner Rocio Martinez said she heard a strange noise and looked up to see the plane with a turbine on fire.

"In flames, here it comes falling toward the ground, and it seems (the pilot) saw it was an area that was too residential and makes a sharp turn," Martinez said. "To avoid (the houses) ... to avoid a tragedy, because there would have been a massacre."

Cuban President Miguel Diaz-Canel said a special commission had been formed to find the cause of the crash. The plane had 104 passengers and six crew members.

State airline Cubana, which operated the flight, has had a generally good safety record but is notorious for delays and cancellations and has taken many of its planes out of service because of maintenance problems in recent months, prompting it to hire charter aircraft from other companies.

Mexican officials said the Boeing 737-201 was built in 1979 and rented by Cubana from Aerolineas Damojh, a small charter company that also goes by the name Global Air.

Aviation authorities in Guyana last year stopped the same aircraft from conducting charter flights because of serious safety concerns, including fears about excessive baggage overloading and other issues.

Outside the company's Mexico City offices on Friday, former Global Air flight attendant Ana Marlen Covarrubias said she had worked for the company for over seven years and knows nearly all the crew members.

"I don't have the words. I'm very sad. We're in mourning," she said in tears. "It was something really, really, really terrible; a tragedy for us."

In addition to the Mexican crew, Cuban Communist Party newspaper Granma reported that the passengers were mostly Cubans plus five foreigners from countries it did not identify. Argentina's Foreign Ministry said two of its citizens had died in the crash.

In November 2010 a Global Air flight originating in Mexico City made an emergency landing in Puerto Vallarta because its front landing gear did not deploy. The fire was quickly extinguished, and none of the 104 people aboard were injured. That plane was a 737 first put into service in 1975.

Mexican aviation authorities said a team of experts would fly to Cuba on Saturday to take part in the investigation.

Update: Airliner with at least 110 aboard crashes in Cuba

Gunman opens fire in Texas high school, killing up to 10