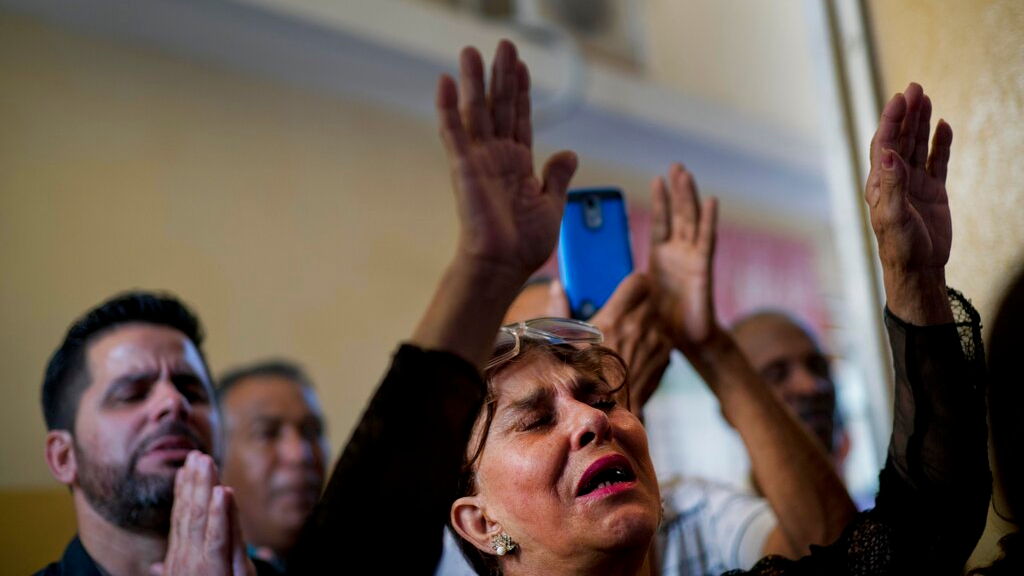 Evangelicals pray during a Mass at a church in Havana, Cuba, Sunday, Jan. 27, 2019. (AP Photo/Ramon Espinosa)

A Cuban government push to legalize gay marriage has set off an unprecedented reaction from the island's rapidly growing evangelical churches, whose members are expected to widely reject a state-proposed constitutional reform in a nationwide referendum this month.

The reform is almost certain to pass by a broad margin of Cuba's 7 million voters - language opening the door to gay marriage is only one element of the reform - but the evangelical vote could shave hundreds of thousands of votes from its victory.

With many pastors promoting "no" votes from the pulpit, the swelling evangelical rejection of the constitution is a novel development for a state that prides itself on projecting an image of ideological unanimity. Cuban government-endorsed candidates and proposals typically receive 'yes' votes well above 90 percent in one of last communist nations on earth, now in the 60th year of its socialist revolution.

"I can't vote for something that goes against my principles. It's sad but it's a reality," said pastor Alida Leon, president of the Evangelical League of Cuba. Hers is one of a dozen evangelical denominations that are actively speaking out against the reform. There are an estimated 100 evangelical denominations active in Cuba, 52 legally registered, and many are taking softer lines against the new constitution, or staying officially neutral. The same is true for many Catholic and non-evangelical protestant clergy.

There is no official count of evangelicals in Cuba, whose people have historically been Catholics and followers of the African religions known as Yoruba or Santeria. The number of evangelical and non-evangelical protestants is estimated to total a million people in this country of 11 million. Among evangelical denominations with public figures on their members, the Pentecostals, Methodists and Baptists alone say they have more than 260,000 followers.

Raul Castro handed the presidency last year to Miguel Diaz-Canel, the first top Cuban leader from outside the Castro family since the revolution. Under Diaz-Canel, the Cuban government maintains its near-total control of life on the island but has made a series of concessions to interest groups including artists, entrepreneurs and evangelicals.

In December, the government softened and delayed a series of strict new controls on artistic expression and private enterprise, and stripped language out of the proposed constitution that would have paved the way for immediate legalization of gay marriage.

The constitutional change came after widespread objection from evangelical churches and non-evangelical Cubans. According to the government, 66 percent of speakers in public meetings on the constitution rose to address gay marriage, with the majority opposing it.

The altered language nonetheless eliminates the requirement that marriage take place between a man and a woman, allowing the future passage of a gay marriage. And that has prompted evangelical pastors and lay people to continue to speak out against the constitutional reform up for a "yes" or "no" on Feb. 24.

The reform maintains Cuba's single-party political system and centrally planned economy while recognizing private property and small businesses, which have been part of the island's economy without formal legal status for more than a decade.

The long process of reforming the constitution began in April, with the formation of a commission that circulated a draft continuing the language paving the way for swift passage of gay marriage. That was heavily supported by Raul Castro's daughter Mariela, the head of the government's gay rights organization.

This fall, as the constitutional draft was being debated in block-level meetings across the country, 11 denominations sent a letter to the National Assembly that was signed by 179,000 people and objected to gay marriage and made 15 other demands, including greater freedom of property ownership.

Leon said she delivered the letter to the Communist Party's Central Committee, which acknowledged receipt but never delivered a formal response, although Leon and other evangelicals did meet with government officials.

Evangelical pastors also began speaking out from the pulpit and distributing Bibles in the street along with hundreds of thousands of pamphlets advocating for God's "original plan" for unions between men and women. The Methodist Church organized "pro-family" services that drew more than 3,000 people.

In December, the National Assembly withdrew the gay marriage section in favor of softer language that allowed a future family code to establish marriage outside heterosexual relationships.

That left many Cuban Evangelicals unsatisfied.

"I'm a daughter of God. God established that man is for woman and woman is for man," said Caridad Borges, a 31-year-old Methodist homemaker and mother of one son. "I'm going to vote against the constitution because it establishes something that I don't agree with."

Joel Ortego Dopico, a Presbyterian pastor and secretary of the Cuban Council of Churches, said he would vote in favor of the constitutional reform but was telling members of his church to vote their conscience.

While the new constitution will be improved, he said the evangelical reaction to it was an important change in Cuban society.

"It will have a political impact in the future," Dopico said.